But it is better to take Andhra Pradesh as a challenge 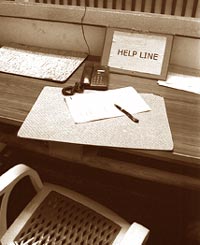 Crucially, the proportion of small loans (below Rs 25,000, mostly to small and marginal farmers) has been falling since the 1990s. Will the banks' service to these sections improve, or will now-increased credit flow to rich farmers, as is usual? Will banks invest in the small farmer, given the burden of non-performing assets? Banks can't provide loans to tenant farmers at all right now, and they have been requesting governments to conduct a land survey and devise instruments to formally recognise tenant farmers and share-croppers. This has to be taken up as a priority. Contract farming has been often proposed as an option. But that is a business scenario, and for it to be on level terms, the farmer must have more bargaining power at his disposal.

A lot has been said of the self-help groups (SHGs) of Andhra Pradesh. Did they fail the distressed farmers? It seems the scale of credit they offer can't provide for the rising costs of agri-inputs. The real challenge is in making agriculture a reasonable livelihood proposition. Till this happens, all talk of increased credit and moratoria on debt recovery is pointless. Right now, the farmer needs financial support. But to ensure this crisis doesn't continue, one area that needs immediate attention is the cost of cultivation. The 'more yield' mentality must go. If the farmer's income increases, so will the costs. That is the rule of the market economy.

The sectors that need the most urgent attention right now are irrigation and agricultural extension services. The AP government has already announced free power to farmers and a waiver on dues of Rs 1,200 crore: timely, but a short term solution. The Congress government plans to spend Rs 36,000 crore on irrigation projects. A loan of Rs 2,000 crore has been announced. Let all irrigation projects be implemented. Even then, half the arable land would still be beyond their command. Has government thought about this?

One of the pre-election promises of the Congress was to make Panchayati Raj more effective and real. Panchayats should be involved in some serious planning to improve the management of irrigation tanks and developing watersheds. For this, they require real power (read: money). The need for local governance is important because water has to be owned and managed as a collective resource -- not like the free-for-all digging of borewells, as is the case now, in which whoever has more money can dig deeper and suck the aquifers dry. And collectivism works only in decentralised systems, not through government orders.

But none of this would mean a thing if the quality and accessibility of agriculture extension is not improved. If the government doesn't hear what the farmer says and doesn't know how to communicate and influence the farmer. "It isn't just the physical presence of extension staff. The government's understanding of extension has to change. "We dwell too much on the failures of the Green Revolution, and seem to have forgotten why it achieved the success that it achieved," says Ramanjaneyulu. "Strong extension and advice to the farmer, farmer-to-farmer exchange of seed, and a research system willing to back the farmer."

The (non)system of crop insurance needs a serious overhaul. In its present form, it provides the farmer nothing. Right now, the crop of the entire mandal has to fail for the insurance application to move. And even if it is approved, the crop insurance money seldom arrives before two years and is never a true compensation.

In all, it is a tough task. But if ever people gave a clear mandate, it was to the Congress in AP this time. It is now the task of the new government to revive agriculture. Is this not a challenge worth taking?