The battle over Lokpal has entered its next big phase. The question now is: how will civil society react to the outcome of the July 3 all-party meeting in which all political parties discounted the role of non-government groups in formulating a law?

Political parties usually see NGOs with suspicion. An analysis of the government’s recent steps to regulate NGOs points towards it. To check misutilisation of foreign funds, Foreign Contribution (Regulation) Act 2010 was introduced, replacing a similar Act of 1976. The new Act brought some key changes. But the most repressive change was to disallow foreign contribution to NGOs “political” in nature. And, it is government’s prerogative to declare which organisation is “political”.

While debating the law in Parliament, most members supported it. Nishikant Dubey, a member of Parliament, said: “NGOs are attempting to impede the process of development.”

According to P T Thomas, another parliamentarian, “The sole authority to declare an organisation political in nature rests with the Centre”. While charting out the objectives of the law, Union minister Ajay Maken said, “One must check the forces which may divide the people of the country”.

Government’s suspicion towards NGOs is also clearly seen in the Voluntary Sector Policy that came into force in 2007. Its objective, said the government, was to “encourage, enable and empower an independent, creative and effective voluntary sector”. But Harsh Jaitly, head of non-profit Voluntary Actions Network of India (VANI), says the rules and regulations contradict the very spirit of the policy.

Many believe such recent government actions would dry up foreign funding for NGOs. The new taxation policy, the Direct Tax Code (DTC), discourages tax incentive for donations. Expected to be effective from April 1, 2012, DTC will cut down tax benefits to donors of the non-profit sector from 100 per cent to 50 per cent.

Already, there is an attempt to create a regulatory mechanism for NGOs. A task force constituted by the Planning Commission has suggested a statutory body called National Accreditation Council of India. NGOs oppose it calling it a government control mechanism. They argue the body cannot be “self-regulatory” as it will have significant government representation. The body will have 51 members, of which 20 will be from the non-government sector. The rest will be nominated by government and industrial houses.

These arm-twisting measures have not gone down well with NGOs. Raghuvir Pradhan of people’s association Ekta Parishad sums up government’s attitude: “Government is using democracy and the role of legislation as a cover to not listen to the common people.” 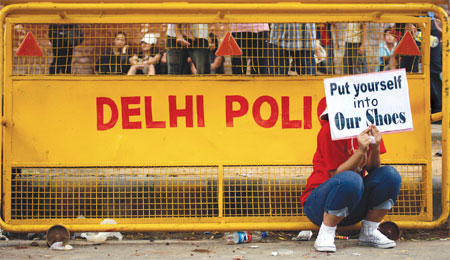