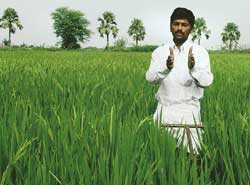 THE first thing to note about the Mulkanoor cooperative is that it is an exception, not the rule. Given the otherwise dismal state of the cooperative movement in India, how many cooperative societies can boast of a turnover in excess of Rs 55 crore? Or have one of its members go on to become the prime minister of the country (P V Narasimha Rao, in this case)? Or not have a single defaulter on the roll of its hundreds of borrowers, with total lending in a year exceeding Rs 20 crore? Or have operations ranging from dairies to a modern rice mill.

Based in Karimnagar district of Andhra Pradesh, the Mulkanoor Cooperative Rural Bank and Marketing Society Ltd is a role model in several ways, and has launched, among other things, many a doctoral thesis. But few people know that Mulkanoor has one of the largest paddy seed growing and selling operations in the country.It consistently places the second biggest request for paddy foundation seeds to the state's Acharya N G Ranga Agriculture University (after the state's seed development corporation). Every year, it lifts 30 tonnes of foundation seeds of 13 paddy varieties, for multiplication into certified seeds for sale to farmers (see box Know your seeds).

The cooperative gives foundation seeds to select farmers, with whom it has had dealings in the past and who have a reputation for seed production. "A seed-producing farmer needs to be very careful. Assured irrigation and capacity to invest in farm inputs are also essential," said G Saraiah, agriculture officer with the cooperative society. The society has a list of such farmers within a radius of 50 km. "We organise certified seed production in up to 1,600 hectares (ha) spread across about 60 villages," Sariah says. For this, the cooperative has three agriculture officers and 10 technical staff, who provide extension services to seed-growing farmers.

It has two seed-processing plants with a capacity to process 64 tonnes of seeds in one day; at peak time, the cooperative also rents processing plants close by. It produces about eight million tonnes of paddy seeds that are sold across the country; from Andhra Pradesh and Karnataka, to Maharashtra and Orissa. The buyers of Mulkanoor's seeds get delivery on their doorstep, with the cooperative meeting transportation charges. "We have a reliable network of seed dealers who buy from us, and they place their indents in advance, based on their estimates of the demand. We have long-standing relations with them. If there are any complaints of seed failures, we replace the seed. But such cases are too few and far between," said Sudhir Reddy, training coordinator and seed advisor to the cooperative. The yearly turnover of the seeds business is about Rs 8 crore, and the profit in the region of Rs 80 lakh. But all this is restricted to paddy.
Reddy said the society had experimented with growing and selling seeds of maize, castor, cotton and vegetables about 10 years ago. "Cotton requires too many inputs and labour. Maize, too, is risky in rainfed areas. As a cooperative, our aim to provide services at affordable rates, with small profits for members. We don't play high-risk games," said Reddy, who retired as joint director of agriculture in Karimnagar district. The seed market for cotton, he observed, has been entirely cornered by private seed companies and their hybrid seeds. "We need high-quality seeds from public sector research. Government-run agriculture universities have done most of the research and varietal development in self-pollinating crops like paddy," Reddy stresses. His association with the Mulkanoor cooperative goes back to 1971, when he was deputed here for a five-year term from the state's agriculture department.