Pesticides could be one reason for high cancer incidence in Bhatinda 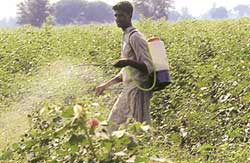 ppcb had commissioned the School of Public Health (sph), department of public health, Post Graduate Institute of Medical Education and Research (pgimer), Chandigarh to conduct the study. The institute's report, 'An epidemiological study of cancer cases reported from villages of Talwandi Sabo block, district Bhatinda, Punjab', compares cancer incidence in Talwandi Sabo (referred to in the report as the study area) with that in Chamkaur Sahib block (described by the report as the control area) of Roop Nagar district, Punjab. Farmers in Talwandi Sabo use canal water and cultivate cotton while their counterparts in Chamkaur Sahib use ground water and cultivate rice or wheat. The rationale for selecting areas with different irrigation patterns was to ascertain links between canal irrigation and cancer. The study also tried to find if cotton cultivation -- much more pesticide-dependant compared to rice and wheat -- could be linked to cancer.

The report observes: "It's difficult to pinpoint a single cause for cancer...A multi-pronged strategy to provide safe water supply, discouraging indiscriminate pesticide use.. is recommended." The technical committee to look into the report has recommended "a comprehensive study of the status of environmental health in other cotton growing areas of Punjab".