Hepatitis C is a growing problem in India, but government has no programme to manage the disease

Thirty-five-year-old James (name changed) from Meghalaya was shattered when he was diagnosed with Hepatitis C in 2009. He got another shock when he found that the treatment, which lasts around one year, would cost over Rs 10,000 per week. Working as a counsellor with a non-profit for Rs 7,000 a month, the expense was beyond his reach. He is one of the millions of Hepatitis C patients in India.

There are no government figures for the number of people suffering from the disease in India. As per World Health Organization (WHO) estimates, 12 million people in India may be infected with the Hepatitis C virus (HCV) and around 96,000 die from it annually. Also, a lot of people suffering from HIV are infected with HCV. According to I-MAK, a US-based non-profit, 13 per cent of the HIV patients across the world also have HCV. 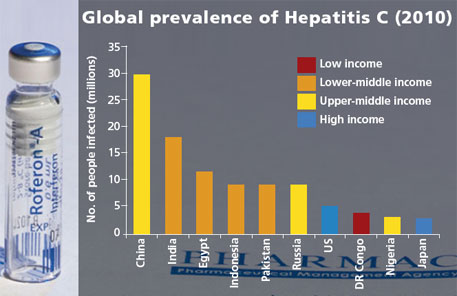 Homa Mansoor, a physician engaged in treating HCV patients under the care of Médecins Sans Frontières (MSF), an international non-profit working for the medically deprived, says the treatment of HCV is exorbitant. According to Loon Gangte of Delhi Network of Positive People, a non-profit working for the rights of HIV positive people, the cost of the entire treatment is Rs 4 lakh to Rs 5 lakh. Gangte says that it is not possible for a common man to bear the cost without assistance from the government. A year ago, Gangte and a few other activists met Planning Commission member Sayeda Hameed to raise the issue. Gangte says that she assured the matter would be discussed with health department officials but nothing has happened so far.

There are no Central government schemes to deal with HCV, but a few states in the Northeast have launched some initiatives. The number of HCV-infected people in the Northeast is higher than in the rest of the country, according to a study by Ashis Mukhopadhya, a Kolkata-based physician. His paper refers to a previous study done in 2001 which found the incidence of HCV in Arunachal Pradesh to be 7.89 per cent. Mukhopadhya’s study was published in the Journal of Bioscience in 2008.

In June 2013, the Meghalaya government assured treatment to HIV and HCV co-infected people. At that time there were only seven HIV-HCV co-infected patients registered under the government’s anti-retroviral treatment scheme for HIV positive people. The government decided to finance the treatment of two out of these seven in the first phase and purchased drugs for a three-month course. The most common treatment for HCV includes one injection of peg-IFN-alpha (interferon) every week and daily oral dose of ribavirin. The state government bought the drugs from India-based pharma company Zydus Cadila Healthcare Ltd at the rate of Rs 9,200 per vial for the two patients.

Hepatitis C Coalition of Meghalaya (Hep.Com), a group of people fighting for the rights of HCV patients in the state, tried to negotiate with Zydus on the price and managed to get it reduced to Rs 5,200 per vial. Zydus offered to provide diagnostic support as well. Hep.Com also wrote to the state government on January 3, 2014, saying the three-month medication to the selected patients would do more harm than good because if there is a more than two-day break in medication the entire course goes waste and there is a chance of the patients developing resistance to the drugs.

K Priyokumar Singh, retired physician from J N Hospital, Manipur, who claims to have treated 250 HCV cases in the state, says, “Sometimes, we counsel patients to go for treatment only if they can afford the complete course. Otherwise, there is fear that drug resistance can develop.”

Recently, US-based pharma company Gilead Sciences Inc registered a medicine named sofosbuvir with United States Food and Drug Administration. It is an oral drug and, hence, easy to administer. But the medicine is exceptionally expensive, costing $84,000 (over Rs 152 lakh) for the complete course. The only way to bring down the price would be to produce generic versions of the drug, like what was done with HIV drugs in India.

Currently, the drug is patented but I-MAK has filed a petition in India on November 21, 2013, opposing the patent. I-MAK says that sofosbuvir does not merit patenting under the country’s patents Act. Lawyer and director of I-MAK, Tahir Amin, in a media statement said, “India’s patent law doesn’t give monopolies for old science or for compounds that are already in the public domain. We believe this patent on sofosbuvir does not deserve to be granted in India and have the legal grounds to prove it.” It should be noted that the cost of manufacturing sofosbuvir is quite low. Andrew Hill, a pharmacologist at Liverpool University has published a study showing that sofosbuvir could be produced for as little as $62-$134 for a 12-week course.

Hep.Com says it can negotiate with Zydus to help in getting the prices of interferon and ribavirin lowered even further, and adds that apart from Meghalaya, states like Nagaland and Mizoram have taken similar initiatives in making deals with pharma companies.

Leena Menghaney, coordinator for MSF’S Access Campaign in India, says there are a number of drug manufacturers engaged in making generic versions or biosimilar drugs for HCV and the government should make use of the opportunity. She says there should be no procedural delay in registering new drugs. Companies like Gilead will try to monopolise but there are mechanism to reduce prices of expensive drugs. Replying to a query on how to bring down prices of expensive drugs, Menghaney said that compulsory licensing (allowing companies to make generic versions of expensive drugs) has worked in India, like in the case of kidney and liver cancer drug sorafenib tosylate last year.
Web edition Web edition Special Report Special Report North East Meghalaya India Hepatitis Hepatitis Health Care Health Finance Drugs Drug Industry Drug Industry Drug Industry Down to earth Diagnostic Methods AIDS
SUPPORT US