There is no way one can tell 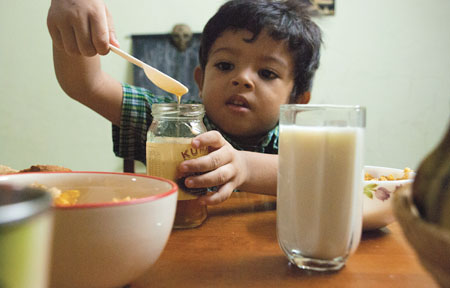 The one kg jar of honey on Sangeeta Das’s kitchen shelf has many uses. Every morning she takes out a small quantity and puts it on the breakfast table. Her husband, Indranil, a media executive, likes a little bit of honey on his toast and the couple’s three-year-old son has spoonfuls. In the evenings, Sangeeta stirs a spoonful of honey into a glass of lukewarm water mixed with lemon juice and drinks it for weight control. She also uses honey in combination with basil (tulsi) and ginger juice as cough remedy. Sangeeta’s fondness for honey holds true for most Indians who regard it as a health food that can rejuvenate the elderly and boost immunity of infants.

Sangeeta’s trust in honey is unshakeable. Prod her little on what she knows about the popular brand of honey she buys and she looks blank. Sangeeta is just a middle income homemaker in a East Delhi housing colony. She is not meant to know beyond the writing on the label. That is the job of the officials in charge of public health safety and commerce. But the government has health safety regulations only for honey that is exported.

The government doesn’t test for antibiotics and other contaminants in honey meant for Indian consumers. The only test results available are for those destined for exports. They could be used as an indicator for how contaminated the honey sold domestically is.

There is an elaborate monitoring and testing procedure in place for honey that is exported. Even honey gathering and collection is monitored before export, said S K Saxena, director of Export Inspection Council (EIC). “The monitoring is a year-long exercise. In the beginning of every financial year, the EIC submits a plan on the methods and systems in place to check harmful contaminants in honey exported to EU,” he said. At the end of the financial year in March, the council sends a report based on this plan. Only when the European Commission’s Food and Veterinary Office (FVO) is satisfied about the quality of the honey, do they allow it to enter the continent. Further tests for contaminants are conducted at the ports of EU member states when the consignments land.

The penalty for improper monitoring and testing of honey exports could mean a ban like the one imposed on June 11, 2010. The European Union banned Indian honey from entering any of its 27 member countries. Reason: honey exported out of India could not be traced back to the farms and were contaminated with antibiotics and heavy metals. A delegation of the FVO, which in September 2009 evaluated the control of residue and contaminates in live animals and their products, found there is no effective control on the distribution and use of veterinary medicinal products in India in aquaculture farms, dairy farms and apiaries. It also noted that 47 per cent of the samples of processed honey collected by EIC (188 out of 400) could not be traced to the farm level.

Indian honey has been under the scanner since 2003. A honey consignment belonging to India’s biggest honey producer—Dabur—was not allowed to enter the UK in 2003 after it tested positive for streptomycin. Since then, EU member states have detected banned substances in Indian honey and honey based products on 10 different occasions. Each time, an alert was sounded and the contaminated shipments were turned away. Substances found in these consignments included antibiotics like nitrofurans, tetracycline, chloramphenicol, streptomycin, and benzoic acid, used to treat fungal infections and as a food preservative. Another consignment belonging to Lee Bee Impex, a big exporter based in Ludhiana in Punjab, was barred from entering the US market in 2007—the honey was found to have originated in China and had residues of fluoroquinolone.

An industry insider said that the samples for exports could be a mix of Chinese and Indian honey. The same could be true for the honey sold in the domestic market as well. According to industry sources, as soon as a honey batch is found to be unfit for export to EU and the US, the exporters start claiming it is for domestic consumption. A government official said the rejected batches are either sold domestically or exported to countries with lax health regulations.

No checks on what we eat

This honey, rejected for exports to EU, may be finding its way into the kitchen shelves gullible consumers like Sangeeta Das. There is no way of knowing.

A honey exporter said India does not tax imported honey for value addition and re-export. But if it is imported to be sold in India, then the importer would have to pay 67 per cent duty. But there is no mechanism to ensure they do not blend imported honey with Indian varieties. “All the seven exporters also buy Indian honey and pack and label them for domestic honey sellers like Dabur and Baba Ramdev’s Patanjali Trust. So, there is no way to check the origin and quality of honey sold to Indian customers” said an exporter.

There is no agency that checks if the honey, sold in India—imported or domestically produced—meets health specifications. The National Bee Board, a registered society under the Union agriculture ministry, is in talks with a German laboratory to set up honey inspection units in India. At present, India does not even have a C-13 nuclear magnetic resonance analyser used for detecting adulterated honey having high fructose corn syrup or cane sugar.

CSE’s analysis of two foreign brands— one from Europe and one from Australia—revealed the samples contained a combination of antibiotics banned in the countries of their origin. These countries have banned Indian honey for contamination.

The only mandatory specifications for honey are contained in the Prevention of Food Adulteration Act of 1954 (PFA). It defines honey but has no regulations for antibiotics. Food safety regulations in India are supposed to be monitored by the Food Safety and Standards Authority of India (FSSAI), set up under an act of Parliament. All foods acts, including PFA, were to be repealed once the rules were framed under the Food Safety and Standards Act of 2006. The rules have not been notified till date. So, while the FSSAI draws its mandate from the act, it continues to rely on PFA to frame regulations.

Till the government specifies and enforces food safety regulations, Sangeeta Das and other homemakers like her would be at the mercy of honey brands that make tall claims about their products.