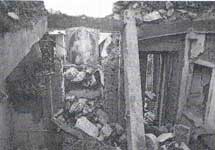 THE earthquake at Latur in 1993, which killed an estimated 9,000 people and rendered many more homeless, drove bipme the point that disaster can strike anvtime, anywhere. Fortunately, there are many organisations working to conuin damage caused by such calamities.

However, K T Srinnivasan, addinal director Of CARE-India, a New Whi-based NGO, says: "With so 09any agencies working in the , special care has to be taken guard against duplication of rts." After the Latur quake, organisation responded first the urgency for clothing; food, ical aid and shelter were g provided by other NGO and rnment departments. CARE provided blankets, water and farm equipment. ncial aid for.the venture came in its branches all over the world.

On the other hand, the Joint ance Centre (JAC) at Gurgaon was up after the devastating Andhra h cyclone in 1977, specifically for des cr preparedness (as distinct from work). The Centre has regular rfammes, which trains people to with various kinds of disasters. programmes also take into conation that the measures required vary with the community and the ild P affected. Recently, JAC conducted a &Shop on industrial disasters for.krvel managers of various compaL At Latur, and earlier at Uttarkashi, Centre also distributed material in affected areas telling people what to the event of another quake.

However, according to JAC convenor N K lain, very few people are involved in disaster preparedness simply because it is the least paying. "All the money and all the sympathy is cornered by people working in relief and rehabilitation programmes," he says. JAC does not usually involve itself in actual relief word "We do not want to add to the confusion," says Jain. He also feels that relief workers should preferably be from the area as outsiders may find themselves socially and culturally unacceptable.

The Centre for the Study of the Administration of Relief (CSAR), a New Delhi--based NGO that was set up in 1986, looks into policy issues concerning disasters. CSAR director Amrita Rangasami feels that India has the expertise to help other nations in the field of relief work. However, as far as the financing of such work is concerned, it has till now been "haphazard, almost amateurish". This is because the allocation of funds by the government is done on the basis of allocation in previous years and also on the basis of"flawed surveys". The CSAR seeks to make disaster management more scientific. In this respect, it has been helped extensively, among others, by the Indian Meteorological Department, which has provided it with relevant data for the past 100 years. The CSAR has also developed a database that can be used by other interested organisations.

With regard to educating people about disaster management, the Madan Mohan Malaviya Engineering College in Gorakhpur has taken the lead. Its department of civil engineering offers disaster management as an optional subject in its post-graduate hill area development course.