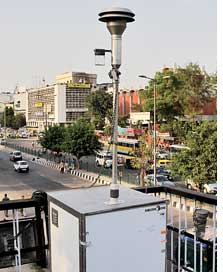 India's national ambient air quality standards have hit a roadblock. Revised after 14 years and finalized in May, the standards await the Union Ministry of Environment and Forests' (moef) clearance. Looks like the clearance will have to wait further because the ministry may scrutinize the recommendations. Critics say the scrutiny is unnecessary and suspect it is a "please-the-industry" move. moef is expected to form another technical committee to vet the proposals made by a steering committee comprising officials of the ministry itself, the Central Pollution Control Board (cpcb), academics and research institutes.

An air quality standard is a description of a level of air quality that is adopted by a regulatory authority as enforceable. The cpcb, responsible for setting the National Ambient Air Quality Standards, notifies the standards under the Air (Prevention and Control of Pollution), Act 1981. The steering committee has made some significant changes in the existing standards and brought more pollutants under the regulation net. The major recommendations of the steering committee include discontinuing the existing system of land use pattern based standards (industrial, residential and sensitive areas for instance). Health-based standards will be made uniform for all.

"Nowhere in the world are land use pattern-based standards set. It is of no use as pollution knows no boundaries," a steering committee member told Down To Earth. The proposed standards have retained the component of tighter short-term standards to protect sensitive areas. To protect such areas, one-hourly standard for NO2 and SO2 have been introduced.

For the first time, standards for very harmful particulates of less than 2.5 micron size (PM2.5) and ozone (O3) have been introduced. Standards for toxic air pollutants--benzene, formaldehyde, arsenic, mercury, nickel, polyaromatic hydrocarbons--too have been proposed. Currently, these pollutants are outside the scope of regulation. The lead standard has been tightened further. The total suspended particulate matter that includes all forms of particles and dust has been excluded.

However, it not clear why the cpcb has not considered tightening standards for PM10, which is the key threat in most Indian cities. The committee members explain that PM10 standards have not been changed as their levels have been persistently high. The who annual air quality guideline for PM10 is 20 microgrammes per cubic metre (g/m3). To achieve that target they have given intermediate targets of 70 g/m3, 50 g/m3 and 30 g/m3. This helps benchmark progress. This strategy would have helped cities in India that are close to the current standards.


The changes have not been easy to propose, given the industry's opposition. During consultations, the proposals came under scathing attack from a few industries. Primarily, fertilizer, power industries and thermal power plants objected to the proposals.

"Industry groups were under the impression that they would be forced to monitor all the toxic air pollutants irrespective of whether they emit. It was explained to them that only those industries that emit any one of the pollutants (under the regulation net) would have to monitor that pollutant. For example, coal-based power plants discharge mercury and hence they will need to monitor it and not the fertilizer industry," a steering committee member said.

Industry representatives requested cpcb to give written instructions to state pollution control boards regarding ambient air quality standards so that the state boards did not "force them to monitor all pollutants". Letters were sent out and the issue resolved, the member said. Then the draft was sent to the moef for a final approval.

But no response from the moef has raised serious doubts about the notification coming through easily. It is not clear why after following an elaborate technical process to finalize these standards by its technical arm, the cpcb, the ministry wants to open up the issue once again.The moef official when contacted refused to comment on the issue. There are apprehensions that if the technical discussions are opened again, the proposals will come undone. At a time when air pollution is taking serious proportions in Indian cities, such delays and silence can spell disaster, says an expert on the condition of anonymity.