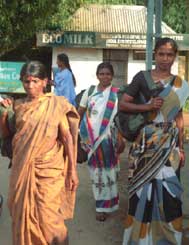 ptr offers an array of ecotourism programmes -- from the Periyar Tiger Trail and jungle rafting for the adventurous to nature walks for just about anybody. "I have been to Sariska and Ranthambore where the only activity is a jeep ride. The range of activities in the park here are far more and Rs 150 (the entry fee for foreigners; domestic tourists pay Rs 12) is not much. In London, I would not even get a cup of coffee for 2 (us$3.48)," says Lucy Curry from England, who is on her fourth visit to India.

Among the most popular ecotourism activities at ptr is nature walks organised by the Tribal Trekkers edc. Its members are young people from tribes, such as the Mannas and the Paliyans, living in settlements on the fringes of ptr. These men have a good knowledge of the terrain, flora and fauna. The edc has more than Rs 4 lakh in its cdf even after giving a loan of Rs 2 lakh to other edcs. "Our edc has run well even after the end of the World Bank project in 2004," says one of the trekkers.


Following the introduction of ecotourism activities at ptr, hotels in Thekaddy have seen a marked increase in the duration of stay by tourists. All hotel brochures now prominently list the ecotourism programmes.

"The average room revenue used to be less than Rs 1,000 per day and now is it is Rs 5,000. The occupancy rate has also gone up," says Anil Kumar, general manager of Spice Village, a luxury hotel.

Owing to the greater tourist influx, the small town of Kumily has not only seen a sharp increase in the number of hotels but also home stays. In recent years, many residents have constructed more rooms in their houses to rent them out to tourists.

There are almost 40 home stays in Thekaddy now. "While earlier tourism did not bring us any income, now we find with improved infrastructure it is bringing us revenue," says T N Sashi, president of the Home Stay Association. He says during the tourist season he lets out his rooms between Rs 600 and Rs 1,200 and off-season rates vary from Rs 400 to Rs 800.

Sashi's school going daughter Anila often accompanies guests on tours around Thekaddy and is as good a guide as any. She has a large collection of coins and stamps from across the world -- gifts from tourists. "We don't travel so we learn about different people and cultures sitting right here in Thekady," she laughs.

A novelty that is becoming a big attraction with tourists is the spice gardens. George Abraham is the owner of one such garden where he grows a variety of spices and medicinal plants. "I have invested at least Rs 1 lakh in it, the returns are dependent on the tourist season but on an average I make Rs 1.5 lakhs," he says. Tour operators bring visitors who are charged Rs 50 for a tour of the garden that takes around an hour.


But all's not well with many of the edcs behind the success of the ecotourism programmes at ptr. For instance, take the case Tribal Trekkers. Being one of the professional group edcs, forest protection is one of their avowed goals. As per their agreement with ptr, they were required to contribute their services to night patrolling for three months in a year. But now they are being involved with protection activities daily.

Another professional group edc, the Periyar Samrakshna, used to be paid Rs 1,500 by fd for forest protection duties 12 days a month. "We have not been paid for three months now. If we do not go for protection duty for a few days because of ill-health, our salary is cut and we face suspension.

"As if this is not enough, there is even talk of our group being disbanded," says a member of the edc on condition of anonymity.

Many edc members feel the behaviour of ptr personnel changed with the iedp coming to an end a year ago. "Earlier, we were respected since they wanted the World Bank funds. Now, since the programme has become a success, we have no power," laments Jayan Ponnapan, a tribal trekker.