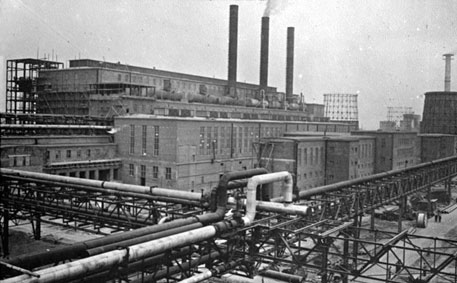 During the Nuremberg War Crimes Trial in 1946, Chief Prosecutor Telford Taylor made a scathing accusation against a German cartel. “These companies, not the lunatic Nazi fanatics, are the main war criminals. If the guilt of these criminals is not brought to daylight and if they are not punished, they will pose a much greater threat to the future peace of the world than Hitler if he were still alive,” he had said. The cartel in question was Interessen-Gemeinschaft Farben or Association of Common Interests, IG Farben in short. The cartel was formed in 1925 after German pharma and chemical majors, Bayer, BASF and Hoechst, joined hands.

During the trials to indict Nazis for culpability in World War II, Taylor and his colleagues went on to provide a huge body of evidence that incriminated the German cartel. The trials revealed that IG Farben was the single largest donor to the election campaign of Adolph Hitler in the late 1920s. A year before Hitler seized power, IG Farben donated 400,000 reichsmarks (German currency between 1924 and June 1948) to Hitler and his Nazi party.

After Hitler came to power, IG Farben worked in close collaboration with the Nazis. Farben produced chemical weapons for the German military and looted chemical industries of the countries Germany occupied during the war. The Nuremberg trials described the conglomerate as “Nazis’ industrial jackal”.

The trials revealed that during the war, IG Farben used slave labour in many of its factories and mines. A part of the infamous concentration camp in Auschwitz in Nazi-occupied Germany was dedicated to supplying slave labour for the nearby IG Farben plant, Buna-Werke, also known as IG Auschwitz. By 1944 over 80,000 forced labourers and death camp inmates had been put to work at IG Auschwitz—the synthetic rubber and fuel plant where Farben had invested 600 million reichsmarks, the Nuremberg trials revealed.

Writer Primo Levi, who was incarcerated at IG Auschwitz, wrote later, “There was chronic hunger…unknown to free men. On the back of my feet I already had those numb sores that will not heal. I pushed wagons, I worked with a shovel, I turned rotten in the rain, I shivered in the wind.” The inhuman conditions claimed several thousands—this despite Farben ensuring that the fittest of the Aushwitz inmates came to the plant. It paid the German 10,000 reichsmarks each year for the purpose.

“Our association with the Nazi party worked to our benefit,” a Farben employee testified at the trials. The company manufactured and supplied Zyklon B to the Nazis. This poisonous cyanide-based pesticide, on which IG Farben held the patent, was used during the Holocaust to annihilate more than a million people at German concentration camps. Farben also supplied the Nazis the methanol used to burn the corpses. 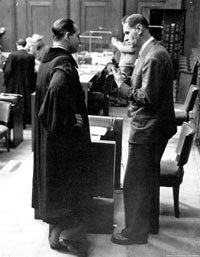 The pharmaceutical departments of the IG Farben cartel used the inmates of the concentration camp for human experiments, such as the testing of new and unknown vaccines. For example, correspondence between the commander of the concentration camp and IG Farbenrepresentatives which came to light during the Nuremberg trials shed light on the sale of 150 female prisoners for experiments on a sleep-inducing drug. Another missive notes, “The experiments were performed. All test persons died. We will contact you shortly about a new shipment.”

A former Auschwitz prisoner testified: “There was a large ward of tuberculars on block 20. The Bayer Company sent medications in unmarked and unnamed ampoules. The tuberculars were injected with this. These unfortunate people were never killed in the gas chambers. One only had to wait for them to die, which did not take long.”

The serologic-bacteriological department of IG Farben experimented on Auschwitz prisoners with their new typhus fever preparation, “3582”. The first series of tests produced results that were far from satisfactory. Of the 50 test persons 15 died; the typhus fever drug led to vomiting and exhaustion. Part of the Auschwitz concentration camp was quarantined, which led to an extension of the tests to the nearby concentration camp at Buchenwald.

In their book, I.G. Farben, fromAnilin to forced labor, the historians Jörg Hunger and Paul Sander note, there was “no scientific value to these experiments. The test persons were in bad physical condition, caused by forced labour, insufficient and wrong nutrition and diseases in the concentration camp. In addition to this there were generally bad sanitary circumstances in the laboratories. The test results in the concentration camps, as the IG laboratory specialists should have known, could not be compared to results made under normal circumstances”. The historians note that Farben footed the bill for the research of Josef Mengele, Auschwitz-Birkenau’s infamous “Angel of Death”, and some of his experiments utilised germs and pharmaceuticals provided by Bayer.

Nazi physician Hoven testified at the Nuremberg Tribunal: “The SS (Nazis) did not have notable scientists at its disposal. The experiments in the concentration camps only took place in the interests of the IG Farben, which strived by all means to determine the effectiveness of these preparations. They let the SS deal with the—shall I say—dirty work in the concentration camps.”

The Nuremberg Tribunal indicted 24 IG Farben board members and executives on charges of crimes against humanity. But only 13 received prison sentences. Taylor described the sentences they received as “light enough to please a chicken thief”. By the early 1950s, a number of those convicted of slavery, looting and mass murder were back at the helm of Bayer, Hoechst and BASF.

One of them was Bayer executive Fritz ter Meer. A senior scientist at IG for many years, ter Meer had become a Nazi party member in 1937 and rose to become the chairperson of IG’s technical committee. He was also the executive responsible for the construction of the IG Farben’s Auschwitz factory. The Nurember trials revealed that ter Meer had a clear picture of what was occurring. He was found guilty of plunder, slavery and mass murder. But ter Meer was out of jail by 1952. By 1956 he had become the chairperson of the supervisory board of Bayer, a post he held until 1964. Even today Bayer continues to honour this convicted mass murderer. On All Saints Day 2006, for instance, the corporation is known to have laid a wreath on ter Meer’s grave in Krefeld-Uerdingen, Germany.