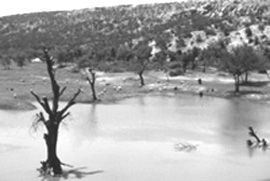 if the Pani biradari (water community) formed at the Paani sammelan (water conference) organised by the Centre for Science and Environment ( cse) on March 23 and 24, 2001 in New Delhi was a ray of hope then the Rashtriya Jal Sammelan (national water conference). organised at Neemi village near Jaipur from 21 April to 23 April 2001, was a milestone. Initiating a national strategy to encourage the Jal biradari (water community) to make participatory water management a national movement, cse , a New Delhi-based non-governmental organisation ( ngo ) and Tarun Bharat Sangh ( tbs ), an Alwar-based ngo organised this conference. More than 5,000 villagers from Andhra Pradesh, Jharkhand, Gujarat, Rajasthan, Bihar and several other states participated in the proceedings. The conference was attended by Jalyoddhas (water warriors), who have undertaken water conservation in order to make their villages drought-free through water harvesting. The biradari decided to work towards establishing people's participation in the implementation of the water programmes with cse serving as the central secretariat of the movement and tbs playing the lead role.

Preparing a blue print for a water revolution, delegates from civil society and the water warriors from the villages divided themselves into five groups to discuss the issues confronting them. In the backdrop of the third consecutive drought in several Indian states, the villagers from all over the country celebrated the success of Neemi village. The Jal biradari with members from all the states pledged to provide impetus to water harvesting work at the grassroots.

At Neemi it was the spirit of democracy at the grassroots that thrived. Hundred and eightynine delegates of 11 ngo s from Gujarat elected Shyambhai Antala, a veteran water harvester to look after the pani samitis (water committees) in the state. He proposed to hold a similar Jal Sammelan of the Jal biradari in Gujarat.
Speaking at the conference, Govinder Singh of Jammu and Kashmir Paryavaran Samiti ( jkps ), a Jammu-based ngo described a padyatra (foot march) that they undertook from Ravi to Rajouri district in the Shivalik Kandi area. Kandi is an area where the only source of water is rainfall. In this region the annual rainfall is just 101.6 centimetres. "We initiated work on renovating old traditional ponds by way of desilting and making catchment areas. The organisation renovated old abandoned baolis (dug-wells)," said Singh. With the help of jkps the villagers constructed check dams, continuous contour trenches and new ponds for water harvesting, he added.

The delegates from Azadi Bachao Andolan ( aba ), an Allahabad-based ngo working in the states of Uttar Pradesh and Bihar, talked about water being the sine qua non of life: even the basis of Dharma and culture is water. "The fact that water is being sold implies selling of life, Dharma , culture and the very basic right of life, " said Satyendra Singh, an activist of aba .

A participant from Ekta Parishad a Chattisgarh-based ngo , Pratap Singh said, "The water warriors will make their state self-sufficient and carry on with the water conservation efforts irrespective of what the government does." The delegates from Madhya Pradesh formed a core group to look into the water harvesting work in different regions of the state. Nilesh Desai of Jhabua district spoke about how conservation had become a mass movement. " First of all we made dams in the Panna area which led to an increase in the production of agricultural goods. Villagers from 60 villages gathered and formed a principle on which the villagers work. The rule is that the soil and water of the field must remain in the field. They have included even children in their work and have formed a bal sansad (children's parliament) run by its mukhiya (leader).

Ajit Kumar Minz, an activist from Jan Chetna Kendra, a Palamau-based ngo from Jharkhand, sounded a note of caution. He reminded the sammelan about the huge pani mela (water fair) in which 186 ngo s had gathered in August 1995 in Palamau and their sukha mukti yojana . (freedom from drought programme) The whole gathering was fed with the contributions from 125 villages of Jharkhand. He narrated the sukha mukti work of his region that was sabotaged by the nexus of corrupt bureaucrats, contractors and politicians. "There is a need to be circumspect so that this conference does not traverse the same path" he added. Now the villagers in Palamau have taken up the movement so that they too can become owners of water, he informed.


"An investment of Rs 4.5 lakh in the water conservation efforts led to an annual income of about Rs 45 lakh in Neemi. If the same experiment is replicated in all the villages of the country it would give a tremendous boost to our economy," said Anil Agarwal, chairperson, cse . If a meagre 100 mm of rainfall that falls on a hectare of land, yields a million litres of water. This is sufficient for even extreme drought-prone regions like Barmer in Rajasthan and Kutch in Gujarat. But if we waste rainfall even Cherapunji, the village in Meghalaya where one of the highest annual rainfall to the tune of 11,000 mm is recorded, suffers from water shortage, he said.

Agarwal says the gross nature product is more important for the republic of over half a million villages than the much-talked about gross national product by the economists and planners. There is no scarcity of water, actually there is scarcity of intelligence, he said. In the coming years there will be water warriors in every village. We have to revert to the same wisdom again, he added.

"A drought free state is possible, the only thing required is an effort to enhance the groundwater level and for that utmost attention should be given to the harvesting of rainwater," said Rajendra Singh, secretary, tbs .

"I have come here as a water warrior and not as a minister. Let us take an oath to built not one but thousands of check dams to ensure surplus water," said Union Minister of State for Heavy Industries, Valabhbhai Ramjibhai Kathiria. Narrating his experience in Gujarat, Kathiria said, in his state Bhabha checkdams were built by the Bhabhas which means old men in Gujarati. This inspired even the young men to participate and as result the annual income of his village increased by Rs 1 crore".

Explaining why Neemi was chosen as the venue, Indira Khurana, the coordinator, of the Natural Resource Management Unit of cse said, "Neemi shows how it is possible to beat drought. It highlights the importance of community efforts." Seven years ago it was just like any other ecologically degraded village of the country, surrounded by denuded hills and the westerly winds that blew through the village and buried everything under sand. The traditional talab (pond) and wells were in a degraded and dried-up condition. With no source of water to irrigate their fields, men migrated. This changed with the entry of tbs in 1994. tbs visited the Neemi village and set a condition of prohibition on liquor before initiating water-harvesting work -- which was voluntarily enforced in the village.

In 1998, the monsoon failed in the state and rivers dried up. But Neemi farmers continued to cultivate their land even during the water crisis.

Consequently in the next summer, crops were sown with a bumper harvest. Everyday 25-30 truckloads of vegetables are sent to markets as far as Delhi during the peak season. Water has become the lifeline of Neemi. Water harvesting has brought prosperity to the village, which is evident from its growing economy. Milk worth Rs 1.25 lakh is supplied to the government dairy every month. Some 34 families of the village are running their private business in milk. As a sign of changing times, people have started keeping cows and buffaloes. Land prices have shot up; Ten years ago only bajra and jowar could be sown during the kharif season, now other crops are also cultivated. "The wage rates have shot up from Rs 30-40 a day in 1994 to Rs 100-120 a day in 2001. The price of manure and fodder has increased five-fold.

Earlier Kathiria released a book on water "Making Water Everybody's Business". The book compiled by cse was termed as Jalveda (Veda of Water) by Rajendra Singh. "If we have to fight against drought, we must start the battle before the drought. In order to remove poverty we must concentrate on water. In 10 years, we can ensure that every village has increased its income by Rs 5 crore" said Anil Agarwal, on the occasion of the book release.

"Water and society have a relationship. Today if Neemi village has become an oasis in the desert, it simply means that the people have rediscovered that relationship. Reverse migration is taking place and workers from other states are coming to this village in search of work on the agricultural land.

The jal abhiyan (water movement) has brought about a miracle in Neemi. The water warriors from all over the country have their task cut out as the nation awaits the replication of Neemi's success.