The investigator who took on a pharma giant in the US 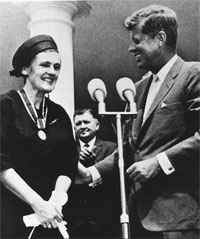 On July 15, 1962, a Washington Post story, ‘Heroine of FDA keeps bad drug off market,’ shocked Americans. The heroine in question was Frances Oldham Kelsey. She had joined the US Food and Drug Administration two years earlier as a drug application investigator. With her expertise in pharmacology, she was the obvious choice to test the veracity of an application for a “harmless” sedative that was already being sold in 46 countries. The drug, Kevadon, was one of the trade names of thalidomide.

The application submitted by William S Merrell Corporation of Ohio came with a sheaf of reports on years of animal testing and human use of the drug in Europe. Merrell pushed hard for quick approval. But Kelsey was suspicious: what she found unnerving was that the effects on humans and animals differed—the drug did not put animals to sleep.

Kelsey decided to exploit an FDA loophole. The agency had 60 days to review a drug application. If an investigator told the company its application was incomplete, it was considered withdrawn. The company would then have to resubmit it with additional data. With each resubmission, the twomonth clock would start again.

For 19 months Kelsey requested more data to show the drug’s safety, and with each request, the clock restarted. The investigator held on despite several threats to her professional reputation and complaints to superiors. She wanted to pinpoint the exact problem with the drug.

One day in February 1961 while browsing the December 1960 issue of the British Medical Journal, Kelsey came across a letter indicting thalidomide. British physician A Leslie Florence had prescribed thalidomide to his patients. The patients who had taken the drug over a long period of time reported cases of peripheral neuritis, a painful tingling of the arms and feet. Kelsey immediately contacted Merrell to seek further information.

Almost simultaneously a disturbing phenomenon was being reported from Europe. A growing number of women were giving birth to deformed babies. Some had abnormally short limbs, with toes sprouting directly from the hips, and flipper-like arms—a condition known as phocomelia.

In November 1961, Kelsey’s worst fears were confirmed by Widukind Lenz, a German pediatrician. Lenz determined the cause of the deformities to be thalidomide as 50 per cent of his patients, the mothers with deformed children, had taken the sedative in the first trimester of pregnancy. He immediately shot off a warning to Chemie Grunenthal, the German manufacturer. Within days of the revelation German health authorities recalled the drug from the market.

The manufacturer continued to dispute the findings, but by 1962, thousands of birth defects had exposed the international disaster. Finally in March 1962, Merrell withdrew its application from FDA. Since thalidomide had never appeared in the US drugstores, Americans assumed their laws had blocked its sale. But little did they know that Merrell had already, using an FDA loophole, distributed 2.5 million thalidomide tablets to physicians across the US in a bid to “familiarise them” with the drug.

Pressed by Kelsey, Merrell issued a halfhearted appeal to doctors to restrict thalidomide use in pre-menopausal women but did not order a total recall. It was only three days after the Post broke the story did Larrick order a full thalidomide recall.