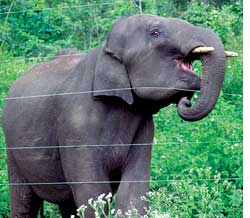 In early 2000, a team of scientists gathered at the Saha Institute of Nuclear Physics in Kolkata and decided to revive research on neutrinos, tiny elemental particles that can pass through almost all matter unhindered. A flurry of meetings followed culminating in a project called India-based Neutrino Observatory (ino), touted as the biggest and most ambitious experiment on particle physics in India. This has generated much enthusiasm among physicists, for though neutrinos are one of the fundamental particles that make up the universe, they are least understood. There are only a handful of observatories in the world carrying out experiments on neutrinos.

Environmental activists and conservationists, however, are apprehensive about the multi-crore-rupees project because it is proposed to come up in the middle of the Nilgiri Biosphere Reserve (nbr), a 5,520 sq km of contiguous protected forest at a tri-junction of Kerala, Karnataka and Tamil Nadu. They fear constructing the observatory will disrupt elephant corridors and add more population to the area, leading to its ecological degradation. A joint committee of the Department of Atomic Energy and the Department of Science and Technology handling the ino project, however, claims adequate measures will be taken to protect the environment.


The facility will be located in a cavern in Singara hill, five-and-a-half km from Masinagudi town in Nilgiri district of Tamil Nadu. The cavern will be accessible from the Tamil Nadu Electricity Board (tneb) compound inside the forest through a 2.4-km-long tunnel.

The reason for having an underground observatory is to filter all possible radiation that can hinder detection of neutrinos, says Amit Roy, director, Nuclear Science Centre, Delhi. "The rock structure like the one in Singara will act as the filter, letting only the neutrinos reach the detector," he says.

But executing the project means digging caverns beneath the Singara hills that will house three components of the project an experimental hall, a control room and a storage and loading area. The experimental hall will be around 22 metres wide, 30 metres tall and 120 metres long. The control room will be about half the size of the experimental hall. Combined with the storage area it will be about 60,000 cubic metres. The experimental hall will house the iron calorimetre. According to Tarsh Thekaekara, associated with the conservationist group, Nilgiri Bioreserve Alliance, building the observatory will require over 52,000 tonnes of iron in the first phase of the project and another 50,000 in the second. About 35,000 tonnes of cement, steel, copper, aluminium, sand and other material will be needed for construction. The road connecting Masinagudi to Singara hill can accommodate only eight-tonne-capacity trucks and the forest department, says a source, will not allow any broadening of the road. Carrying 137,000 tonnes of iron and building material will require more than 17,000 trucks to ply on the road.

The bigger challenge, says Thekaekara, will be transportation of debris from tunnelling. Digging a tunnel 2.38 kms long and 6.5 m wide will mean scooping out close to 90,000 cubic metre of earth, he says. Now add to it 75,000 cubic metre of rocks and soil from digging the experimental hall and 60,000 cubic metre from the control centre and loading and storage. Total debris will be around 2,25000 cubic metre. Granite being its chief component with a density of 2.8 gm/cm in the Singara hills, the debris will weigh 625,000 tonnes. This means another 78,000 trucks pressed into service to transport this matter. So a total of over 95,000 trucks will be needed to transport the construction material and remove excavated matter from the site. Considering that the duration of construction will be four years, it will involve nearly 130 trips through the Masinagudi-Singara road every day, Thekaekara points out.

Development activity in the area has already disturbed the elephant habitat and created man-animal conflict, adds M Mohanraj, project coordinator for the Nilgiris and Eastern Ghat landscape of World Wide Fund for Nature. "The road joining Masinagudi to the project site crosses the Kallamalai-Singara-Avarahalla elephant corridor used by three clans of elephants, each with around 50 members. We have seen an increased number of incidents of elephants killing people and raiding crops in last few years. The construction work can only make it worse," he says.

Mohanraj warns that once the observatory comes up, the area will be bustling with visitors and traffic will increase (see table). "The observatory is bound to expand, and with expansion vehicular traffic will increase, threatening wildlife," he says. Members of the ino team and professors at the Institute of Mathematical Sciences in Chennai, V N Murthy and D Indumathi, however, say the maximum size of the unit will not exceed 50 kilotonne.

The observatory site already has Pykara Ultimate Stage Hydroelectric Project (pushep) and Pykara power station. "In the early 1980s Masinagudi was a small settlement with a handful of people. But things changed gradually when the pushep project came up bringing thousands of labourers," says Thekaekara. After the project was completed in 2005, most of the labourers settled at Masinagudi. Today the population has crossed 15,000."

A rapid environment impact assessment (eia) of the project carried out in 2007 by the Salim Ali Centre for Ornithology and Natural History (sacon), Coimbatore, also warns that construction of the project can interfere with migration of animals along at least two major corridors.


According to Care Earth, a Chennai-based ngo that prepared the environment management plan (emp) for the project, Singara is the only site where an observatory like ino can be set up. "The physical requirements of the project--seismically stable area, overhead rock cover and not too much rainfall--are available only in the Western Ghats, and that too south of Kudremukh in Karnataka," says R J Ranjit Daniels, managing director of Care Earth. "We had also identified sites at Annamalai hills and Plani hills but both receive very high rainfall." Daniels says he had short-listed 20 sites in the Western Ghats, but building the observatory anywhere else will cause much more ecological damage because other sites are equally or more bio-diverse than the Nilgiris and have no infrastructure. "The ino site situated inside the tneb complex already has infrastructure such as road, electricity and water supply, and competent manpower to drill tunnels," he adds. The Nilgiris are a resilient ecosystem, says Daniel, pointing out that despite tneb having done 55 km of tunnelling in the area in the past 75 years, the reserve still has the largest population of elephants and a healthy number of tigers.

The interim project report of ino had in January 2005 suggested three sites Rohtang Tunnel near Manali in Himachal Pradesh, Rammam Hydel Project in Sikkim and pushep. Rohtang was the first to be dropped because of adverse weather conditions in the winter. The Rammam site is inferior in terms of infrastructure, falls in high seismic zone and receives higher rainfall and is also more expensive to build.


Members of the ino team say most issues raised by conservationists will be addressed in the compliance report, the final draft of which will be out soon. According to Murthy and Indumathi, of the total excavated matter 20 per cent or 608 kilotonne will be consumed in the constructing walls and roads inside the cavern. The rest will be kept in a four-hectare yard to be provided by tneb. The dumping yard will be enclosed by a wall to prevent leaching of the debris into water sources. "We will ensure that vehicle movement is restricted between 6 a.m. and 4 p.m. and the frequency of truck trips restricted to six-eight a day," says Indumathi. Murthy adds that the elephant corridor through Singara is on private land. "We are submitting a proposal to buy this land on behalf of the forest department so that the elephant corridor can be secured," he adds.

Conservationists also complain that the project proponents have been secretive approach. Ajay A Desai, an elephant conservationist based in Nilgiri, alleges that the eia has not yet been made available for public comment.

In a meeting on April 17, 2008, at the district collector's office in Ootacamund the ino team interacted with conservationists and Masinagudi residents. A source present at the meeting says the ino team gave a presentation on the project but did not give anything in writing. The eia was not made available to the public. ino members deny this. In this meeting it was also announced that a study to assess the impacts of the observatory would be carried out by Care Earth.

Initially, the project proponents did not even prepare an eia. "We sent the proposal to the Ministry of Environment and Forests in 2007 for environmental clearance which was denied because none of the relevant documents, including the eia, was submitted," says a member of the ino team. The ministry's expert appraisal committee on new constructions and industrial estate projects, in October 2007, recommended that environmental clearance should not be given to ino because it had not submitted important documents like eia, plans for muck disposal, water use and effluent treatment. "In November 2007, we submitted the documents that the ministry had asked for and in January 2008 the committee recommended clearance for the project," says the ino member. But the clearance is subject to obtaining a no-objection certificate from the state forest department. According to an official who did not wish to be quoted, the department is yet to give this certificate. "We are studying impacts of the observatory on the ecology. Until we are satisfied we will not give a go-ahead," he said.


The Masinagudi panchayat has decided to support the project, but on the condition that all unskilled work during construction must be given to the residents of Masinagudi, all non-technical jobs at the observatory must be given to local people, the site should not be used for nuclear experiments or defence purposes and the granite-rich debris excavated from the site must be given to local people for selling in the market.According to panchayat president Sangeetha Binu, an agreement will have to be signed between ino members and the panchayat before construction begins.

"Unemployment is very high in Masinagudi, so anything that will give us employment is welcome," says P T Varghese, a Masinagudi resident. He says ino members have promised them at least 40 jobs at the project site but the eia says there is provision for only 16 people as auxiliary staff. Varghese also claimed that the promise included hiring nearly 1,000 families of labourers settled in Masinagudi during construction of pushep. Again the eia says that only 70 skilled and semiskilled workers will be hired for the first two years of construction.