WHO links excess mobile phone use to cancer; experts divided on health impact of radio frequencies 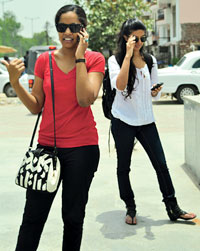 For years the World Health Organization (WHO) maintained that radiation from cell phones is generally safe. But on May 31, it changed its stand and announced that cell phones pose a possible cancer risk.

A panel of 31 scientists at the International Agency for Research on Cancer (IARC), a part of WHO, came to this conclusion after reviewing existing literature on effects of exposure to radio frequency electromagnetic fields, such as those around mobile phones.

Drawing on data from hundreds of studies, the scientists linked long-term use of mobile handsets to glioma, a malignant type of cancer of the brain and the spinal cord. The cancerous tumours originate in the glial cells that help in neuron function, and are difficult to remove surgically. One study of past cell phone use (up to 2004) showed 40 per cent increased risk for gliomas in people using mobile phones for an average 30 minutes per day over a 10-year period. The IARC assessment will be published in the July 1 issue of The Lancet Oncology. The assessment is a part of the IARC Monographs programme for publishing evaluations of scientific literature on the carcinogenic properties of various types of agents.

The IARC working group, comprising epidemiologists, toxicologists and exposure assessment scientists, was chaired by Jonathan Samet, professor in the department of preventive medicine at the University of South California. The panel has classified cell phones under 2B category of the IARC table, which includes lead and banned insecticide Mirex. Coffee, too, has been put in this category based on its weak association with urinary tract cancer. The table includes all those agents “possibly carcinogenic to humans”; agents categorised in group 1 are those with proven risk of cancer; 2A lists agents “probably carcinogenic to humans”, which are more strongly associated with cancer than agents in category 2B. WHO, in its press release on May 31, said the evidence is “limited”, meaning it is insufficient to prove a definite link between mobile phone use and cancer, and called on governments to conduct more studies to monitor the impact of radiation on human health and the environment.

Cell phones emit radio frequency electromagnetic waves in the range of 10 MHz to 300 GHz. These emissions are a type of non-ionising radiation, which cannot break molecules in the human body unlike the potent ionising radiation from X-rays and gamma rays. While low frequency electromagnetic fields from cell phones, radio and televisions are generally considered harmless, there has been growing concern about their ill-effects, especially with the growth of cell phone use. There are an estimated five million cell phone subscribers around the world at present.

Evidence inconclusive: industry Wireless and telecom operators underplay the risks from mobile phones, saying the WHO report does not give any definite conclusions. Michael Milligan, secretary general of Mobile Manufacturers Forum (MMF), an international association of telecommunications equipment manufacturers, says IARC has “only concluded that it may still be possible that radio frequency fields are carcinogenic and has identified areas for further research”. Rajan Mathews, director general of The Cellular Operators Association of India, says the new classification is only a call to international and government agencies to conduct more research in light of increased cell phone users, especially among the young, and increased cell phone density in the world.

Experts are divided on WHO’s assessment. Jitendra Behari, professor at the School of Environmental Studies in Delhi’s Jawaharlal Nehru University, agrees with WHO findings. “It’s a fair conclusion but a bit late. A number of studies we carried out have already revealed there’s considerable risk involved,” says Behari. He cites a 2010 study done by his team in which rats were exposed to mobile phone frequencies ranging from 900 MHz to 2.1 GHz. It was noticed that DNA strands in rats’ cells broke after they were exposed to radiation for two hours daily for several days. The study contradicts the general notion that non-ionising radiation from cell phones is not powerful enough to break living cells.

But Anoop Kohli, neurologist at Indraprastha Apollo hospital in Delhi, says cell phone radiation is not harmful and the evidence evaluated by WHO is not comparable with evidence against tobacco. “Mobile phones have been around for more than 25 years. If there was a definite risk from them, it would have been clear by now,” says Kohli.

University of Manchester scientist Frank De Vocht says there are too many gaps in knowledge to conclusively say mobile phone use causes cancer. Vocht’s study published earlier this year found no significant increase in brain cancer incidence in Britain between 1987 and 2007; his study was a part of the IARC review.

The IARC reviewers relied significantly on epidemiological data for their evaluation, but these are not considered sufficient. “These studies are on human populations where it is impossible to control everything like in a laboratory study on animals. For example, duration of cell phone use may be different in different populations and the type of cell phone may differ,” says De Vocht.

India’s premier medical research institute, the Indian Council of Medical Research, is conducting its own study on the harmful effects of cell phone use. An inter-ministerial committee set up by the Telecommunications Department has said that the vast body of research does not indicate a cause-and-effect relationship between mobile handset use and cancer.

Regulations not in place

The parameter employed to measure emission levels from cell phones is called specific absorption rate (SAR), the rate at which radiation is absorbed by the body. The accepted SAR limit in India is 2 W/kg, which is adopted from the International Commission for Non-ionising Radiation Protection (ICNIRP) and is higher than the American cap of 1.6 W/kg.

The inter-ministerial report, released earlier this year, has called for revising this limit in light of observations that Indians are predisposed to greater harm from electromagnetic radiation—the body mass index of an average Indian is lower than that of a European; so is the fat content. Union minister of state for telecommunications Sachin Pilot has said the final guidelines on emission limits would take into account the best global benchmarks and scientific evidence but did not specify when these would be issued.

Towering danger The WHO report on mobile phone use has not mentioned cell phone towers and their health effects, though they emit significant levels of radiation. In India, citizens across cities have filed public interest petitions against cell phone companies for installing mobile phone towers near their homes (see ‘Warning signal’, Down To Earth, January 31, 2011).

The Indian government has adopted the ICNIRP guidelines for base station emissions—9.2W/sq metre. Countries like China and Austria have stricter norms—0.4 W/sqm and 0.001 W/sqm respectively. The limit prescribed by ICNIRP is only for short-term exposure, says Girish Kumar, professor at IIT Mumbai. “But we have adopted it for 24-hour exposure,” he says.