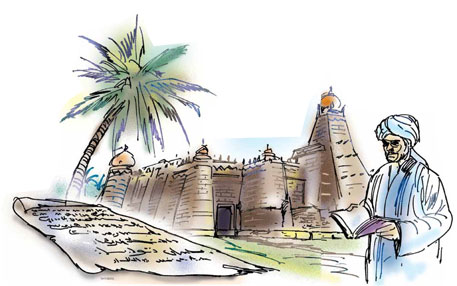 In 1999 an American historian, John Hunwick, came upon a cache of old documents in a family library in Timbuktu, Mali. The discovery was seminal. It revealed that Africa had a sophisticated literary culture. This went against the grain of historical writing then Africa's history was thought of as all oral tradition.

Of course, historians had always acknowledged the cosmopolitan character of Egypt. But interior Africa was different matter. Comments like those made by the British historian Hugh Trevor-Roper held sway till even some years back. "Perhaps in the future, there will be some African history to teach. But at present there is none. There is only the history of Europeans in Africa. The rest is darkness," Roper noted in 1963.

Hunwick's discovery has begun to change such perceptions. "Africa has for too long been stereotyped as the continent of song and dance, where knowledge is only transmitted orally," Hunwick said at the time of his discovery.After Hunwick's discoveries, the hunt for written testimonies of Africa's past has intensified. Private and public libraries in Mali have already collected 150,000 brittle manuscripts, some of them from the 13th century, and local historians believe these are just a fraction of what lies buried beneath sand.

Most of these documents are in Arabic, but some are in indigenous languages such as Songhai and Hausa, written using Arabic script. These include legal reflections, innovative scientific and medical treatises, and even poetry by women. There is a volume on math, a guide to Andalusian music, even love stories and correspondence between traders plying the trans-Saharan caravan routes.
Timbuktu was founded in early 12th century by ethnic Tuareg nomads near the northern-most bend of the Niger River. Their caravans took salt from Saharan mines to trade for gold and slaves and transported them along the river from the south. By mid 14th century Timbuktu was part of the Malian empire. According to one belief, the place name is said to come from a Tuareg woman named Buktu who dug a well in the area where the city stands today--Timbuktu means Buktu's well.

When the Renaissance was barely stirring in Europe, Timbuktu was already the centre of a prolific written tradition. Wandering scholars were drawn to Timbuktu from North Africa, Arabia and even Persia.

At the centre of this intellectual ferment was the University of Sankore where courses as varied as theology, astronomy, medicine, rhetoric, and literature were taught. In his book, Timbuctoo the Mysterious, the 19th century French writer Felix Dubois describes the intellectual accomplishments of this medieval African university "The scholars of Timbuctoo yielded in nothing, to the saints in the sojourns in the foreign universities of Fez, Tunis, and Cairo. They astounded the most learned men of Islam by their erudition. That these Negroes were on a level with the Arabian savants is proved by the fact that they were installed as professors in Morocco and Egypt."

In addition, scholars returning from pilgrimage augmented Timbuktu's manuscript collections over the centuries and study in other centres of Islamic learning, often by copying them with their own hands. According to Hunwick within Timbuktu there existed an active copying and scribal industry that ensured a continual production of manuscripts for the consumption of scholars, students and literate citizens.

It was composed of several independent schools or colleges, each run by a single master or imam. Students associated themselves with a single teacher, and courses took place in the open courtyards of mosque complexes or private residences.
Scholars wrote their own books as part of a socioeconomic model based on scholarship.The 16th century Spanish traveller to Timbuktu Leo Africanus, noted that books were the most valued among the various articles of trade. He noted " hither are brought divers manuscripts or written books. In Timbuktu there are numerous judges, doctors and clerics, all receiving good salaries from the king. The king pays great respect to men of learning."

The profit made by buying and selling of books was only second to the gold-salt trade. Among the most formidable scholars, professors and lecturers was Ahmed Baba. Baba, is said to have written more than 40 major books on subjects such as astronomy, history and theology and his own private library that held over 1500 volumes.

According to the historian Elias Saad, teaching and scholarship seems to have formed a sort of social adhesive serving to cement ties between families. The intellectual ferment seem to have played a city-wide integrative role which transcended the diverse ethnicity of Timbuktu's inhabitants. Ties forged through the student/ teacher relationship resulted in added ties through matrimony and also facilitated joint ventures in commerce. Saad adds that these scholars were the leaders of Timbuktu's urban community and served as its representatives and as regulators of its public affairs.


Timbuktu's fortunes sank in 1591 when it was overrun by a Moroccan army. When Portuguese explorers discovered new trade routes along the West African coast, Mali was sidelined. Under French rule the country continued to slide into poverty and isolation. Families squirreled away the manuscripts behind false walls. They hoarded them in holes in the ground and stashed them in the desert for safekeeping.

A lot of the documents uncovered by Hunwick were in the possession of descendants of Mahmoud Kati, a 16th century scholar who, along with others, jotted intricate notes in the margins of his books. Occasionally Kati commented on the texts, but mostly his notes strayed to other topics, from weddings and funerals to floods and droughts. For example, he wrote of a meteor "In the year 991 (around 1583) in God's month of Rajab the Goodly (August), after half the night had passed stars flew around the sky as if fire had been kindled in the whole sky--east, west, north and south. It became a mighty flame lighting up the earth, and people were extremely disturbed about that. It continued until after dawn."


As the fame of the manuscripts spreads, conservationists fear those that have survived centuries of termites and extreme heat will be sold to tourists at extortionate prices or illegally trafficked out of the country. Some of the texts, written on delicate paper, are already beginning to fray. Timbuktu's leading families have only recently started to give up what they see as ancestral heirlooms. Sean O'Fahey, a professor of Islamic African history at the University of Bergen, Norway, says that part of the problem in Mali, unlike some other African, is that most of the people who own these manuscripts cannot read them because they do not know Arabic. "So what you've got in Mali," he explains, "is a kind of break in the intellectual heritage."

This rift between past and present, he says, could prove to be the greatest obstacle to preserving Timbuktu's cultural legacy. But the manuscripts have now become a symbol of African pride. African countries have thrown their weight behind efforts to preserve the Timbuktu manuscripts.

South African president Thabo Mbeki has shown personal interest. South Africa is spearheading "Operation Timbuktu" to protect the texts, funding a new library for the Ahmed Baba Institute--named after Timbuktu's most well known 16th century scholar. The country is now sharing with Mali its own technical expertise on preserving ancient documents. For Mbeki, the project will "restore the self respect, the pride, honour and dignity of the people of Africa."