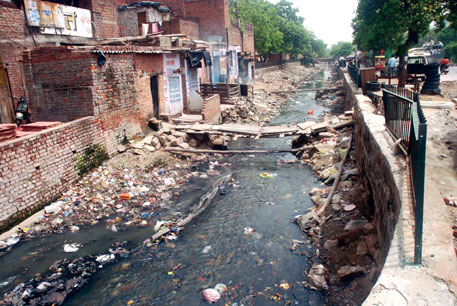 Delhi is notorious for its overflowing drains and poor sanitation. The situation is so bad that just half of the city’s population has sewerage connection. Media reports show that cases of water-borne diseases like cholera are reported more from areas lacking sewerage systems such as Rohini and Shahdara. This underscores the need for connecting every household with proper sewerage system—a task that officials of Delhi Jal Board (DJB), the city’s water utility, say will be achieved soon. “It is just a question of time and the whole of Delhi will be connected to sewers,” says RadheyShyamTyagi, member (water), DJB.

The reason for DJB’s optimism is the recently drafted proposal of Sewerage Master Plan for Delhi 2031. The new plan involves laying 9,807 km of sewer networks and proposes 75 new sewage treatment plants (STPs) at 38 locations. It also plans to increase the city’s total wastewater treatment capacity from 2,700 million litres of water per day (MLD) to 4,383 MLD.

But a closer look shows that the plan, though ambitious, has failed to address the basic issues that have crippled the city’s sewerage system. The DJB’s draft proposal, prepared in collaboration with government undertaking WAPCOSand private consulting firm AECOM, was made public on September 10 for comments and suggestions.

The proposal has been drafted with the assumption that merely increasing the number of STPs can solve Delhi’s sanitation problems. But past experience shows it will not work. At present, the city has 34 STPs at 21 locations. These plants work at only 57 per cent of their capacity. The draft is silent on how to make the existing STPs operate at full capacity. It also conveniently assumes that the 75 proposed STPs will operate at their full capacity. 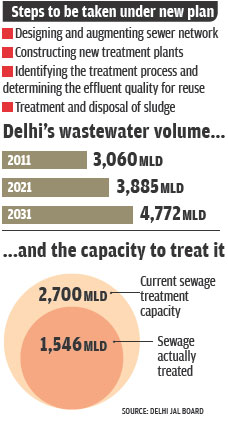 The other problem is that while calculating the amount of wastewater that will be generated between 2011 and 2031, DJB has ignored the groundwater extraction through private bore wells. The water utility has no data on how much groundwater is being extracted in the city. This might substantially increase the city’s wastewater as the general thumb-rule is that 80 per cent of water used gets converted into wastewater.

One of the problems with the existing sewerage system is that treated water from STPs get mixed with wastewater before it reaches the Yamuna. This happens because the drains that are supposed to carry the treated water get polluted with wastewater that is released from unsewered colonies near the drains. Under the master plan, DJB claims this mixing of treated sewage and wastewater will not happen because the entire city will have sewerage connection. But since it is underestimating the actual wastewater output of the city by not including the discharge on account of groundwater extraction, the problem of wastewater finding its way into drains will remain (see ‘A futile exercise’).

“If these assumptions fail, it would be a great blow to the plan,” says Manoj Mishra of Delhi-based non-profit Yamuna JiyeAbhiyan. Mishra says the plan is also silent on the design improvements that are required in the existing STPs. The present STPs need to be upgraded to be able to treat wastewater with high biochemical oxygen demand and total suspended solids. Since the new and old systems would be integrated, only designing new ones to handle the impurities would not serve the purpose. Tyagi says the upcoming Yamuna Action Plan (YAP)-III will look at the design upgradation required in the existing STPs. YAP-I was launched by the Union government in 1993 to improve the water quality of the Yamuna. It was followed by YAP-II. But the two projects have failed to improve the quality of the river. In fact, Central Pollution Control Board data shows that despite the two YAPs, Yamuna’s pollution levels have worsened over the years.

The other major problem is that many of the existing STPs are located in areas where not much sewage is generated. This has happened because finding land for STPs in an already crowded city is difficult, according to the draft of the master plan. Finding land for the 75 new STPs will be a big challenge. Deepak Lakhanpal, deputy chief engineer of WAPCOS, says the plan is effective but needs to be implemented soon. Since DJB is planning to get it implemented in phases, the gap between phases might increase the population and wastewater generation in many areas. “This would make the calculations go haywire,” admits Lakhanpal.

An optimistic Tyagi says DJB will soon hold a workshop and finalise the plan, which he claims “will improve the quality of life”. The Sewerage Master Plan for Delhi 2031 is no doubt ambitious, just like Delhi’s earlier attempts to clean the Yamuna. The trouble is that this too will fail if DJB does not get its focus right.