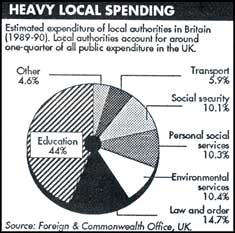 The powers of local government in the UK derive from acts of Parliament -- not from the Constitution -- and can be amended to suit the wishes of the central government.

The future of local government at the district (borough) and county levels is currently under review. The ruling Conservatives prefer a system of unitary local authorities, arguing this would be efficient, less costly and closer to the people. But opponents brand this as another government move to centralise. The review procedure also does not adequately recognise the forms of regional and district governments that now exist in Scotland.

The ruling Conservative party wants local government to stop being merely a provider of services, such as waste collection and housing, and instead become an enabler of services by privatising them and overseeing their quality. Local authorities will no longer have the power to attach conditions to contracts, such as using local labour or ensuring equal job opportunity. The overriding consideration is price -- and the lowest tender must be accepted. While this may be touted as promoting a free market, it inhibits local authorities wanting to place emphasis on the local economy or on sound environmental practices.


The government's new tax policy allows local authorities to raise only upto 16 per cent of the funds needed through a new council tax on private property, at a rate linked to property value. The remaining local expenditure is provided for by the government. By giving local authorities new responsibilities -- but not the authority to raise funds to implement them effectively -- the power of local authorities is more theoretical than real.

Even laws concerning the environment are implemented by "arms of government" -- such as the nature conservancy councils, the national rivers authority and the inspectorate of pollution. However, the legal framework within which these institutions work is being affected increasingly by European Community directives.

England has, in addition to 39 county councils and 296 district councils whose powers are similar to those in Wales, more than 10,000 parish (rural) and town (urban) councils - the lowest tier of local government. Generally they are not found in large towns and cities, where about 75 per cent of the English people live. The parish and town councils have several functions, including providing local amenities, employing local help for minor tasks and supporting local voluntary groups. They also have to be consulted in the planning of local projects.

An example of a parish council at work is from the hamlet of Whitton in northeast England, whose parish members objected to the district council's decision to encourage Unigate Co. to establish major chicken farms in the area. They argued the project would raise the risk of cross-infection between intensively reared chickens and wild birds thronging the two rivers near Whitton. As the parish council lacked the power to veto the district-level decision, Whitton's 146 voters decided to take the matter to court. This persuaded the district council to change its mind and help pay the parish council's legal fees of about L20,000.

The 1990 Environmental Protection Act gives borough councils -- the lowest level of local government for most people -- substantial new responsibilities and pollution control powers. But the local government's difficulties in implementing these controls is illustrated by an incident in Glanford borough, whose residents complained of fumes from a small furniture factory. The environmental health officer (EHO) could prosecute only if the perpetrator was caught in the act, which necessitated many visits taking up much time.

Another flaw in the act is its requirement that borough councils draw up waste-disposal plans that include recycling of household refuse. However, without additional funding from the government, implementation is not possible. The government, for example, has signed various agreements to reduce the use of CFCs (chlorofluorocarbons), which contribute to ozone-layer depletion, but it has not provided councils with the cash needed to recover old refrigerators, a major source of CFCs. The government wants such recovery centres to be established by the refrigerator industry.

Local government is effective only when it is carried on within a clear, constitutional framework, with adequate revenue-raising powers and a duty to provide information. The system operating at present in the UK leaves much to be desired.