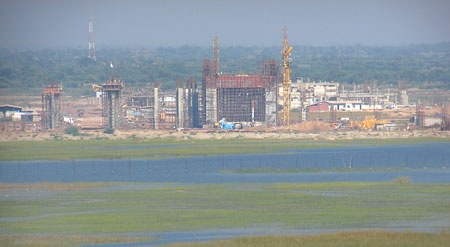 About a decade ago, farmers of 15 villages in Mahuva block in coastal Saurashtra could barely grow one crop a year. This was because the groundwater they used for irrigation was saline. Their fortunes changed in 2000 when the Gujarat government created a reservoir—Samadhiyala bandhara— by building a dam at the mouth of the river Shensuri that flows through Mahuva. The dam prevented sea water from entering the river. The reservoir’s sweet water helped farmers grow up to three crops a year and set up agro-processing units. But the good times were not to last. In 2008, the state government allotted part of the reservoir and its catchment area, totalling 268 hectares (ha), to detergent company Nirma to set up a cement plant.

The cement plant of 1.91 million tonnes per annum capacity, with its 50 MW captive power plant and a coke oven plant, is being built speedily in spite of stiff opposition by area residents. Nirma has also obtained in-principle approval from the state to mine limestone from 3,460 ha in Mahuva’s Padhiarka village to feed the cement plant. A visit to the site in Bhavnagar district revealed the company has raised a road embankment in front of the plant which is blocking the reservoir water from entering adjacent farms.

“We have complained to the collector and are awaiting his decision. If the water flow is not restored, the farmers will remove the barrier themselves,” said Kanubhai Kalsaria, BJP MLA from Mahuva, who has been leading the fight against Nirma and the state’s BJP government.

Samadhiyala and three other reservoirs along the coast—Kalsar, Nikol and Malan—are the lifeline of farmers. Government records show the reservoirs, connected by a 40 km channel, irrigate over 8,500 ha agricultural land. But while obtaining clearance from the Union environment ministry, the cement plant site was mentioned as barren land. The reservoir’s status has been central to the conflict between Nirma and the area residents.

The matter was first raised in September 2008 during the mandatory public hearing that precedes environmental clearance by the environment ministry. The ministry’s record shows only 60 people attended the hearing; residents say close to 400 people were present. Thirteen people objected to the plant’s construction in the water body, but the ministry granted clearance based on a rapid environmental impact assessment (EIA) that described the site as barren land.

People then formed a front, the Mahuva Bandhara Khetiwadi Paryavaran Bachav Samiti, and moved the Gujarat High Court in March 2009. Their petition challenged the land allotment to Nirma and the validity of the environmental clearance.

The court case and growing public protests forced the Gujarat government to set up a high-level committee to examine the matter. Work at the site was suspended for six months. The panel headed by S K Shelat, adviser to chief minister Narendra Modi, accepted the existence of the reservoir in its report submitted in early August 2009.

Of the allotted 268 ha, 222 ha was given to the salinity control division in the year 2000 for building the Samadhiyala bandhara, the panel said, adding 100 ha allotted to Nirma was permanently submerged while the remaining 122 ha was in the catchment area that gets flooded during monsoon. The report noted that the land use was never changed in the revenue records which categorised the site as wasteland.

The Shelat committee suggested three alternatives. One, allow Nirma to construct the plant in the 268 ha that was allotted. Two, allow construction on 214 ha and return 54 ha to the reservoir. (The committee said this option would not improve farmers’ access to the water body because it would be surrounded by the plant complex on three sides and limestone mines on the fourth). Three, allow the cement plant on 168 ha and return 100 ha to the reservoir; the panel did not specify which portion should be returned. The panel said the third option would quieten protesters and improve Nirma’s chances of acquiring land for mining from farmers.

These recommendations were reviewed by a sub-committee of ministers, constituted in late August 2009. It chose the second option and directed Nirma to return 54 ha of the allotted land and asked it to increase the water storage capacity of the reservoir by 21.2 million cubic feet (MCF) to compensate for the loss to the reservoir. For this, Nirma was asked to deepen 40 ha of the peripheral area of the reservoir. The present capacity of the bandhara is 62.31 MCF.

The high court accepted the subcommittee’s recommendation to return the 54 ha, in an interim order in December 2009. The petitioners, meanwhile, obtained satellite images from the Indian Space Research Organisation at Hyderabad to prove the existence of the reservoir. These images were presented in the high court in March 2010 and the court ordered a stay on the construction of the plant till a decision was taken. In its final order in April 2010, the high court ordered the company to give another 46 ha of land back to the state government in addition to the 54 ha (see ‘Court cements Nirma claim’, Down To Earth, October 31, 2010).

Returning 100 ha to the state entailed a change in the layout and design of the plant. Nirma ought to have informed the ministry about it, as specified in the conditions for environmental clearance, but it did not do so. This is another reason the environmental clearance should be scrapped, the people’s front said. Kalsaria said the high court order was not acceptable as the plant was still on reservoir land. “The 100 ha returned is not the land which is permanently submerged. So, what is the point of this alternative?” he asked.

The Samiti then decided to appeal to the Supreme Court where the case is pending. “It was in the apex court that Nirma for the first time conceded that the plant is in the water body,” said Anand Yagnik, counsel for the petitioner. A 2002 judgement of the Gujarat High Court had ordered the state government to identify and notify all water bodies and ensure they are not put to any other use. Yagnik said the “judgement has not been dealt with in the manner required, which was why so many water bodies like Samadhiyala bandhara remain nonnotified.”

The apex court asked the environment ministry for its opinion on constructing the plant in a water body and the impact it will have on the reservoir. The ministry sought time to file a reply and said it plans to send an expert committee to the site. The affidavit is likely to be filed later this month.

An analysis of the project’s EIA report by Delhi non-profit Centre for Science and Environment shows the report did not study the project’s hydrological impact. The EIA is silent on the presence of the reservoir as well as the river Shensuri. Only in a table on land use pattern, based on satellite images, the EIA said that 27 per cent of the study area is a water body.

The EIA was conducted in the dry months between March and May which could be an attempt to hide the presence of the water body. Even the Form 1 submitted by Nirma to obtain the terms of reference for the EIA hid or falsified information (see ‘Nirma said site is barren’), which means the process of obtaining environmental clearance was based on false data.

Industry eyes village commons Nirma’s case is not an isolated one. In Andhra Pradesh, the state government allotted a portion of a wetland in Sompeta mandal in Srikakulam district to Nagarjuna Construction Company Ltd. The proposed 2,640 MW coal-fired thermal power plant on beela (wetland) triggered public protests. Two persons were killed when police opened fire on protesters on July 14, 2010. The next day the National Environment Appellate Authority cancelled the project on an appeal by an NGO, Paryavaran Parirakshan Sangam, working in the area. The cancellation followed a site inspection report submitted by a committee of the Union environment ministry.

The ministry’s panel established the presence of the wetland and said the thermal plant would affect fishermen and farmers in 30 villages in the district. These villages depend on the beela for irrigation and inland fishing.

Nagarjuna Construction Company had not disclosed the presence of the water body at the project site at the time of obtaining environmental clearance. The EIA was carried out in the dry months and the project land was shown as wasteland. “The clearance to the power project in Sompeta was cancelled because the ministry failed to appreciate the real nature of the land and the EIA did not mention it either,” said Ritwick Dutta, counsel for petitioner.

The common link between the Sompeta thermal power project and Nirma’s cement plant is that in both cases the EIA report suppressed and misrepresented facts. The two EIAs did not disclose the crucial information that the project sites are in water bodies. The question then is whether a water body ceases to exist merely because it has not been notified. “In Sompeta, the wetland was classified as tampara in the revenue records which means wasteland. The site visit revealed that the wasteland is indeed a seasonal wetland,” said Dutta. 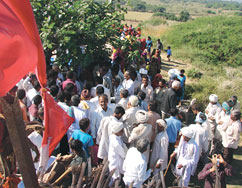 An EIA consultant based in Delhi said government records only provide additional reference. “The most important aspect is the site visit report. So, the EIA should have reported a water body or wetland if one exists at the site even if the revenue records call it grazing or waste land,” the consultant said. Not including correct site-specific information can lead to cancellation of clearances, he added.

In practice what is happening is that government agencies are taking advantage of unchanged land use of water bodies and wetlands to allot them to industries. Non-notified water bodies, usually categorised as waste or grazing land, are the easiest to divert for industrial use (see box ‘Common assets given for exclusive use’).

The environment tribunal’s ruling scrapping the Sompeta power plant is a shot in the arm for Mahuva residents. A January 31, 2011, judgement of the Supreme Court also rules in favour of community rights over natural resources.

The judgement was passed on an appeal against the decision of a division bench of the Punjab and Haryana High Court. In Patiala district of Punjab, two persons illegally filled up a village pond to build houses. The revenue records mentioned the site as gair mumkin toba or village pond, belonging to the gram panchayat. The apex court judgement upheld the high court order to evict the occupants (see ‘Return of village land’).

While doing so, it noted how water bodies are being given away to industries by authorities colluding with them. The court has asked all state governments to prepare schemes for evicting illegal occupants of village commons and return them for community use. The Supreme Court order to protect village common land and water bodies strengthens the plea of the farmers of Mahuva that their rights over water body cannot be alienated, said Yagnik.

Nirma had suggested to the court that it will build an artificial water body to compensate for the loss of the bandhara. The new water body will be fed by three canals (see map below) to keep water inflow intact. This study was done by a private consultant hired by Nirma.

The Gujarat government agreed to the alternative after Water and Power Consultancy Services, an agency under the Union Ministry of Water Resources, said it is technically feasible. Nirma spokesperson Ashish Desai refused to comment on the case saying the matter is sub judice. 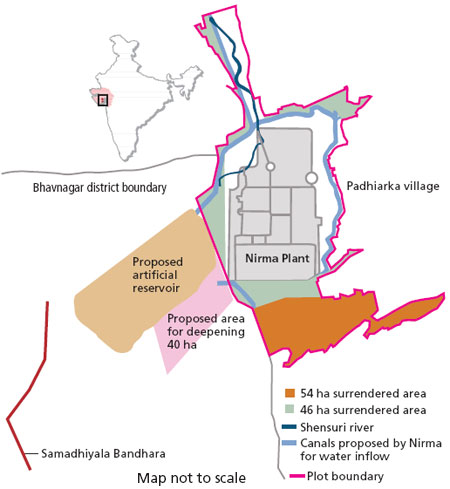