No consensus on vulture census, conservation

No consensus on vulture census, conservation 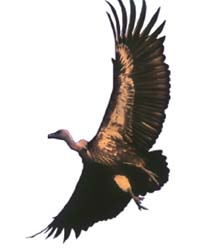 Vulture conservation in India is in a state of flux. The only point that researchers agree on is that it is absolutely vital but there is no consensus on how to go about it. There is a dispute regarding vulture censuses, the causes for their decline and even the measures needed to solve the problem of the bird's relentless progress towards extinction.
The role of vultures as scavengers is vital. According to the Bombay Natural History Society (bnhs), which runs the Conservation Breeding Centre at Pinjore, Haryana, there has been a sharp decline in the number of vultures. The sudden decline started in the 1990s, according to bnhs, which estimates that the two predominant species, Gyps indicus and Gyps tenuirostris, has seen a decline of about 99.7 per cent and 97.4 per cent between 1992 and 2003.The actual population of vultures, however, is debated and the method to track them--through monitoring stretches of roads for vulture sightings--is not correct, says Anil Chhangani from Jai Narain Vyas University, Jodhpur.

Several causes have been outlined and rejected. Until the late 1990s, the debate centred around pesticides. It was reported that only four vultures out of 2,000 remained in the Keoladeo National Park, Bharatpur, in 1998. And the probable reason that was given then was that the carcasses--food for vultures--contained high level of pesticides (see 'What's eating the vulture?' Down To Earth, January 15, 1999). Research thereafter absolved pesticides as the cause of vulture deaths. Some said a viral disease was the reason.

A study, published in Nature online, January 28, 2004 gave a new insight into the debate. It found diclofenac, a commonly used painkiller for cattle, responsible for the decline. Diclofenac was found to lead to gout, kidney failure and the subsequent death of vultures.

Meloxicam, another non-steroidal anti-inflammatory drug, was suggested as an alternative because it was not harmful for vultures but has similar medicinal properties as diclofenac. The Indian Veterinary Research Institute supported research and then came the ban on diclofenac. The drug controller general of India directed phasing out veterinary diclofenac and replacing it with meloxicam by August 11, 2006 (see 'No side-effects?' Down To Earth, March 15, 2006).

But diclofenac has not completely been done away with yet. Nita Shah, who runs bnhs's vulture advocacy programme, agrees that the use of diclofenac is still prevalent. But she sees it as a challenge that needs a lot of work. Chhangani, however, feels there is more to the vulture story. He holds mining, logging and even jatropha plantations--conditions that change the habitat--responsible for the decline.
A possibility perhaps, if we go by what S M Satheesan, honorary member of Vulture Study Group of Endangered Wildlife Trust, South Africa, has to say. He believes that since groups of vultures have been found dead together more often than not, one can rule out disease and pesticides as the causes.

In India, poisoning is held to be a common tool for poachers. Since vultures are scavengers and feed on carcasses, poachers poison dead animals to kill vultures. Their motive for doing this is that forest rangers track vultures when they zero in on a carcass to locate poachers, Satheesan says. Detailed studies, however, are yet to be done to establish this as a substantive cause.

Does it help? bnhs, under its Vulture Conservation Breeding Programme, has two breeding centres, one at Pinjore and the other in Alipurduar,Jalpaiguri district,West Bengal. Chhangani says vultures do not mount in captivity and have, therefore, never been bred in such situations. Chhangani also questions the ethics and protocol of breeding wild animals in captivity.

According to him, rather than catching wild individuals, one should breed the ones that are already in zoos. The first release of vultures from the breeding centres is planned for seven to eight years from now. Chhangani believes that the numbers released will be too small for recovery of populations. Satheesan doubts their adaptability to the wild. But Vibhu Prakash, principal scientist, bnhs, explains that the work is based on mathematical models which have room for externalities.

Satheesan recommends feeding stations as the best solution and Chhangani is all for captive care for juveniles and injured vultures. But Shah says it is not that simple, essentially because feeding stations need to be devoid of disease and toxins and that leaves the option for slaughter of healthy animals. Besides, vulture deaths are rendered all the more difficult to study because, more often than not, they are in inaccessible areas where their bodies disintegrate before experts can reach them, says Shah.

The Worldwide Fund For Nature, India, had framed a project to set up two feeding stations in 2000 but the project has not been implemented yet. There are suggestions that the programme was sabotaged, though no concrete case has been made.

Qamar Qureshi of the Wildlife Institute of India says scientists must work in tandem to tackle the issue. In the present scheme of things, that, however, appears a remote possibility.