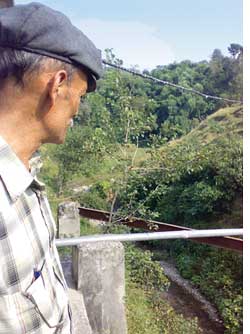 The dejected eyes of Kartar Chand Rana, 52, panned the breached checkdam in his village, Kuhan. As head of the gram vikas samiti he ordered the breaking of the embankment of the very dam that fed his half hectare land until last year. It was the best thing to do under the circumstances. The dam had silted over and the only way to clear the reservoir was to break the wall and let the water wash down all the mud. The immediate cause of the blockage dumping of debris from the construction of a pwd road that connected Kuhan to the highway. Kuhan petitioned the pwd to pay for the reservoir's clean-up, but nothing happened. After many gloomy discussions in the village square the farmers took the tough decision--to breach the dam wall in pre-monsoon of 2007.Now they are collecting funds to install iron gates to plug the breach and prevent similar problems in the future.

Kuhan is tucked far away in the hills of Himachal Pradesh's Kangra district. It is a typical changar--a region that receives high rainfall and yet faces water shortages due to lack of storage facilities. In 2003 the village pooled resources and with some help from a watershed development project constructed a checkdam on Gulana Khad, a nullah that ran across the village. With irrigation now available crop production increased six times; it was now possible to grow vegetables and fruits for cash.

The honeymoon lasted only a year. By 2005 the reservoir collected silt and its capacity halved. The worried villagers looked for a lasting solution. There was no quick formula they could apply here. With help from Winrock International India, a non-profit organization, the villagers diagnosed the problem and came up with a unique prescription.

Most of the silt came from the grazing land of Ooch, a village high up the nullah. How to control it? How to get Ooch farmers to make the effort that will solve Kuhan's problems?

Both villages discussed the dam and its silt and reached a formal agreement. Ooch banned grazing for eight years on its four-hectare common land and planted saplings of fruit, fodder bearing trees as well as bamboo and elephant grass. In exchange, Kuhan paid for these saplings and even worked out an arrangement to sell irrigation water to Ooch as and when required. The silt load in the nullah reduced and the villagers rejoiced again.

That was before PWD entered the scene and destroyed all that villagers of Kuhan and Ooch had achieved. "We entered into an eight-year agreement with Ooch to save our checkdam only to break the dam ourselves," lamented Rana, who won, lost, won and lost again the battle to secure irrigation and therefore prosperity for his people. "The dam opened our eyes to the problem of erosion in our area," said Purshottam Singh, 66-year-old farmer who participated in the project in Ooch. Singh felt the joint project was as beneficial for Ooch as it was for Kuhan, if not more. It stemmed erosion and gave the village more fodder and beneficial trees in the bargain.


The agreement between Kuhan and Ooch still stands. It is an example of how relations between two villages can be reworked to mutual benefit, centred on natural resources. The written agreement as negotiated between the two villages is what is called "payments for ecosystem services" (pes) in contemporary natural resource management parlance. The idea behind pes is to first identify environmental services or ecosystem services. These can be anything, from clean water, clean air, flood control, creation of soil, food production, fisheries, timber production, carbon sequestration to countless other benefits that underpin human wellbeing.

Identification of an ecosystem service implies that people understand its importance and want to preserve it. And they are willing to pay for this. pes creates a market for ecosystem services where users directly pay service providers. This concept has been gaining ground around the world though in India it is relatively new. Kuhan is a classic pes example where water is the ecosystem service and Ooch the service provider for its role in maintaining the health of the nullah. A buyer-seller arrangement was brokered. Since Ooch had to compromise on grazing to save the water from siltation, Kuhan, being the beneficiary, compensated for it. Kuhan generated its own funds to pay Ooch when it delivered an environmental service. To extend the logic of the Kuhan-Ooch joint venture to forests, people will want to conserve them if they were paid to do so.

Kuhan is an important example, albeit on a small scale, not only of a successful pes model, but also what it implies for the future of resource management. There are lessons in it for policymakers.

pes gained momentum with the release of the Millennium Ecosystem Assessment (mea) in 2005. The mea recognized that benefits accrued from natural ecosystems were widely recognized, but poorly valued. "Increasingly it is becoming clear that traditional economic concepts like the gdp only reflect economic values leaving out the state of natural resources. One might know the rate of growth of a country's economy, but still have little idea about whether this growth is sustainable", agrees Rajeev Semwal, ecologist and consultant with the non-profit organization, lead India, a nd a proponent of pes.


Payment for ecosystem services is calculated using a variety of methods by ecologists and economists. One of the areas where India has made progress is Net Present Value (npv) calculator. npv assigns value to forests. It is an additional cost to be paid for the diversion of forest land (See "Diversion Route", Down To Earth, October 16-31, 2008).

Another tool is the mandatory compensation required to be given by project for conversion of forestland as per the Forest Conservation Act. All this money is collected in a central fund called campa, short for Compensatory Afforestation Management and Planning Authority (see "States may get campa money", Down To Earth, April 16-30, 2008). There is at present over Rs 6000 crore lying unused under this head.

The problem with systems like npv is that it is tricky to value most environmental services. For instance, it is easier to calculate the value of trees based on their timer value or fruit value, but it is difficult to fix a sum for other services of a forest like water, beauty, home for animals and plants. Then again, as Vikram Dayal, Associate Professor, Institute of Economic Growth, said, "Collection of npv or campa funds is one thing but there is no clarity on what is to be done with the money". The policy lacks direction, he believed. This could have serious implications if pes was to become a tool for conservation.

Dayal was part of another study commissioned by wwf that examined introducing suitable economic instruments in India, including pes. The study was carried out in three sites--Gangtok, Shimla and Munnar. It calculated costs and benefits of two specific services urban water services and landscape beauty. The results will be used to assess and identify opportunities for broader application of pes.

"In Himachal, pes is already working in the Great Himalayan National Park where communities are paid Rs 5000 annually if no fires occur in the area they patrol; but there is no formal regulatory mechanism to say that you paid for this service", said T R Manoharan, of wwf who co-led the economic instruments project. Clearly, Dayal and Manoharan find the government unprepared to adopt the pes model or the buyer-seller arrangement for resource management.

Sejal Worah, also of wwf was, however, optimistic. She spoke from her experiences in the economic instruments study the private sector was quite happy to pay for these services as it made their access to resources easier but the public sector still seemed reluctant. "The good thing is that nobody rejected outright the idea of paying for using an environmental service."

Valuation of ecosystem services forms the basis for informed decision-making. "One needs to examine both the way numbers are made and how effectively they help shape policy decisions that can be widely accepted," Dayal summarized. On a note of caution he added that some market-based methods were best thought of as coming up with minimum prices of services, as they often did not consider the harder-to-value components of an ecosystem's worth like clean air. Even Semwal felt monetary estimates were easy to comprehend, but hid assumptions, approximations, and simplifications. They measured only certain kinds of value. But they also integrated information about supply and demand, of what is important to people, however imperfectly.

The 12th Finance Commission (2005-10) for the first time recognized the need to invest in resources and earmarked Rs 1000 crore for five years to be given to states for preserving forests. Himachal Pradesh's annual share was Rs 20 crore, a pittance compared to the standing value of its forests. Given the money they can earn by selling forest resources, this is obviously not enough incentive to preserve forests. The state government therefore took steps towards realizing the value of these services by trading them through the World Bank as carbon credits. The credits brought in money equivalent to the amount of CO2 absorbed through afforestation activities. The money that Himachal earns from this will go to the communities working on th project.

Himachal Pradesh Chief Minister Prem Kumar Dhumal, was upbeat when he said "We aim to preserve our forests and the 20 plus-year-old green felling ban is testimony to that". He further stated.that trading in carbon credits provided funds and hence the incentive to preserve forests.


Himachal intends to use cdm as another form of pes. cdm does not consider standing forests and excludes the community from its fold by entering into an agreement with formal institutions like the government. "Untouched natural forests store three times more carbon dioxide than previously estimated and 60 per cent more than plantation forests," said Chetan Agarwal of Winrock International India who brokered the Kuhan-Ooch agreement. Therefore, PES agreements like the one between Kuhan and Ooch, he felt, might just be the right mechanism to save old forests and their services. "Even if one were to engage in cdm projects, fluctuation in the rate of carbon credits would mean uncertainty for the people who invest in these," he said.

"pes, however, requires clear community rights over resources to succeed,"opined Agarwal. Citing the example of central India, he added, that the government has never really engaged with the tribals to settle their rights resulting in large tracts of land being classified as forests. The result today is conflicts. In such a sitution it is not possible to attempt any pes arrangements between users and providers. "Further one needs 'sweat equity', what the community invests in conservation must also be computed in the cost of resources," said he.

Summing up the status of pes, Worah of the wwf study stated that though there was enthusiasm among private parties to pay for ecosystem services the stage was not set as yet. With the governance structure and policies not conducive to pes, value as well as payments for ecosystem services is still contentious. Therefore, small application of pes is possible, but scaling it up is still a far cry.