No headlines, no rehabilitation

Oustees of the Kutku and Auranga dams in Bihar complain media attention is the only way of getting justice from the government, but the media devotes its ink only to big money projects

No headlines, no rehabilitation 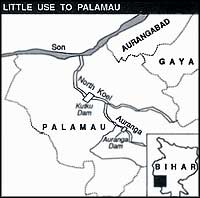 IT IS THE economics of a dam and not the plight of the people it displaces that makes a good news report for national and international media and earns a quick invitation from the government for a dialogue. Citing the Sardar Sarovar as an example, a senior Union government official made this observation recently about the 86 Kutku dam oustees, who are on dharna in Daltonganj, headquarters of Palamau district in Bihar. All 2,000 families facing displacement are still to be rehabilitated even though work on the dam over the Koel river is likely to be completed by June 1995.

Likewise, despite a decade-long agitation by farmers of 21 villages in the submergence zone of the proposed Auranga dam on the Auranga river, Prime Minister P V Narasimha Rao recently cleared the project as a long-term, drought-relief measure in Palamau. Reacting to Rao's action, the president of Auranga Baandh Virodhi Sangharsh Samiti (ABVSS), Bhola Prasad, says, "Given the perennial nature of drought in the district, this was quite expected, but we are determined to carry on with our battle."

The Kutku oustees -- mainly Korba, Oraon and Parahia tribals -- are angered by the media apathy to their cause. Vishwanath Singh, whose village Talwai will be the first of 27 to be submerged, complains: "The regional press is so obsessed with politics, our plight has got no mention so far. The administration is equally callous, putting us behind bars instead of doing us justice. But we are resolved to continue with the dharna until we are rehabilitated."
The villagers first protested in a rather unorganised fashion in early 1979. But when this protest fell on deaf ears, the farmers from 27 villages including 10 within the Betla National Park, agreed to accept the government's terms and conditions, which included Rs 1,350 in cash for immediate compensation, a small plot of land for each ousted household and a job for one member of each such household. The government also promised to pay compensation for submerged agricultural land.

But Badri Pandey of Bhartiya Mazdoor Sangh, a local trade union that has assumed leadership of the agitation, contends, "Only 210 people have been employed so far as peons, sweepers and clerks in schools and hospitals. People from more than 1,700 households are still awaiting employment." Nine villages were compensated last year for loss of land. But now, Suresh Shaw, a Samaya village oustee, complains, "The government has fixed arbitrary rates for our lands. For dhan 1 (best quality land), we got only Rs 75,000 per ha and for dhan 3 (degraded land), only Rs 30,000." The market rates are Rs 1.5 lakh and Rs 62,500 respectively.

The government also concedes the villagers are still to be compensated for 7,800 ha. And, Shambhu Kishore Prasad, superintending engineer of the irrigation department, clarifies: "The government intends to compensate the rest, but not this year because Bihar is financially badly hit."

Even so, completing the Kutku dam is a priority item for the state government because, as a senior district official notes, about 90 per cent of the work is done, and more than Rs 400 crore of the Rs 439 crore allotted to the project has been spent. Chief minister Laloo Prasad Yadav also is reported to be keen to complete the project before his five-year term ends.
The proposal for the Kutku and Auranga dams was conceived in 1967 as a panacea for Palamau's irrigation problems. Work on the 68-metre-tall Kutku began in 1979, but, ironically, experts now say the dam, designed to irrigate Palamau and generate 24 MW of electricity, will irrigate only 20,000 ha in Palamau. The major beneficiaries will be neighbouring Aurangabad district, where 160,000 ha will be irrigated, and Gaya district, with 33,000 ha that will be watered. Also standing in the way of Kutku's conpletion is lack of clearance from the Union ministry of environment and forests (MEF). Warns P K Sen, director of Project Tiger in Betla National Park, "Unless the Bihar government provides land for alternative afforestation for the park's 1,400 ha that will be submerged, the MEF will not issue the clearance." Sen also insists the 10 villages closest to the park's core area must be relocated. But a senior forest official, who asked to remain unidentified, retorts, "Where is the land for the irrigation department to give as compensation? One way out could be making payment for restoration of the forest department's own degraded land."

As for the Rs 300-crore Auranga project, a senior government aide discloses, "The irrigation department has admitted in a secret note to the state government that the hydrological data concerning the Auranga dam is not dependable, because officials were not allowed by the villagers to gather grassroots data."

According to informed sources, the chairperson of the Central Commission on Scheduled Castes and Tribes has written to the Union government explaining the disastrous effect the dam would have on about 1,700 families, of whom 73 per cent are tribals.

A detailed project report prepared by the Dehra Dun-based People's Science Institute has also cast serious doubts on some basic aspects of the dam. Contradicting the government's project report, which states only 21 villages and one forest area would be affected, the institute report estimates 27 villages and three forest areas would be submerged when the maximum reservoir level is reached.

Says tribal Bhola Prasad, "Besides the loss of Palamau Fort, which is the only standing monument to tell us of our history, what would be most traumatic for the tribals would be adapting to a currency-based economy." A district official agrees and points out that most tribal oustees fritter away compensation payments and then lead a pauper's life.

But what many consider most inhuman is the government's decision not to undertake development work in the 21 villages facing submergence, despite the project hanging in the balance for 12 years. Says Somu Bhuiyan of Kamaru village, "Our repeated requests for a school and a link road has failed to move the administration."