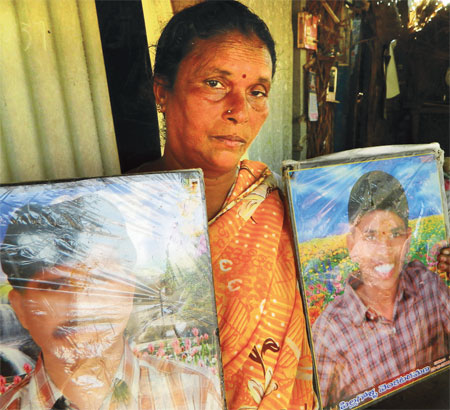 In Tatiparthi village of East Godavari district, Samineedi Vasantharaidu and his wife are holding customary rites on the fifth day of their son’s death. Haribabu killed himself by consuming pesticide on March 12. “He was just 25,” says his inconsolable mother.

Haribabu was in utter distress. He had to shoulder his family’s responsibility since his father suffers from tuberculosis. The family is landless despite farming for generations. Haribabu had taken 1.2 hectares (ha) on lease from a big landowner to grow paddy and cotton, paying annually Rs 15,000 an acre (0.4 ha). His debt to a moneylender had crossed Rs 1,50,000, and the interest rate was 36 per cent. He was left with nothing to harvest after the devastating Nilam cyclone struck the Andhra Pradesh coast in October last year. “The landowner showed no mercy. He insisted on payment of full rent,” says the father. Didn’t the government compensate Haribabu for the crop damaged by the cyclone? “The landowner will get that,” says Vasantharaidu. The family is unaware of the law the state introduced more than a year ago that made tenant farmers eligible for crop loans. Haribabu’s parents have not even informed the police or revenue officers about his suicide. “We are scared of the police and postmortem,” says Vasantharaidu.

Haribabu is the thirteenth tenant farmer in Gollaprolu block to commit suicide after the Nilam cyclone. “Like Haribabu’s, most suicide cases have gone unregistered,” says G Appareddy, East Godavari district secretary of All India Kisan Sabha (AIKS). At least 50 farmers in the district have ended their lives in the past five months, he adds. Almost all of them were tenant farmers belonging to the Backward Class, Scheduled Caste and the Scheduled Tribe. None of them had received any institutional credits (like loan from banks). Since lease agreements are not on paper, it is difficult for the victims’ families to prove the reason for suicide is agriculture distress (see ‘Genuine or not?’).

Andhra Pradesh is one of the five states witnessing a large number of farmers’ suicides. Between 1995 and 2011, a total of 33,326 farmers committed suicide in the state, according to the National Crime Records Bureau (NCRB). Most of them were tenant and small farmers. Tenant farmers are either landless or own less than half a hectare. Since they do not have documents to prove tenancy, their deaths go unnoticed. Rough estimates peg tenant farmers at 2.5 million but AIKS says the number is as high as four million. “Small wonder then NCRB said 2,206 farmers committed suicide in Andhra Pradesh in 2011 and the state said 141,” says S Malla Reddy, state president of AIKS.

Tenancy is high in the coastal Andhra districts, especially in East and West Godavari, which have better irrigation facilities. The two districts together have more than 500,000 tenant farmers who cultivate more than half of the farmland. “The tragedy is that it is the landowners who avail financial assistance, including crop loans, compensation for crop loss, subsidies for inputs and crop insurance, while the actual cultivators are tenant farmers,” says B Balaram, state president of Tenant Farmers’ Union under AIKS. 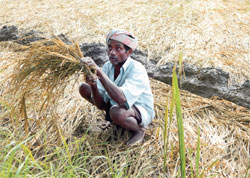 A majority of the big landowners who lease out their land are contractors, industrialists, traders, mill owners, government employees and politicians. Most of them have moved to cities like Hyderabad and Visakhapatnam and many live abroad.

In West Godavari district, 11 per cent of the farmers are big landlords who possess 42 per cent of the cultivable land. The rest of the land is shared by the remaining 89 per cent, which include small, marginal and tenant farmers. Many small farmers also give their land on lease because they are unable to cultivate their land because of escalating input costs.

To look into land distribution matters, the state government constituted a committee, chaired by Koneru Ranga Rao, the then minister for municipal administration and urban development, in 2004. Two years later, the committee submitted a report that notes tenancy is increasing in the state, but there are no revenue records of tenant farmers. The Andhra Pradesh Tenancy (Andhra Area) Act, that came into force in 1980, mandates registration of tenant farmers, but it has not been implemented. The committee urged the state to protect the tenure rights of tenants without disturbing the ownership rights of land owners. Tenant farmers can come out of the clutches of the moneylenders only if they get access to credits from public institutions, it says. The committee recommended providing each tenant farmer with a loan eligibility card.

Following the committee’s recommendations, the state enacted the first-of-its-kind Andhra Pradesh Licensed Cultivators Act in 2011. The aim of the Act is to give legal support to tenant farmers so that they have access to institutional credits. Under it, a tenant farmer is entitled to get a Loans and Other Benefits Eligibility Card which has to be renewed annually. A cardholder can claim crop loan from banks and other benefits like input subsidies, compensation for crop damage and crop insurance. Tenant farmers have to give a self-declaration on their tenancy which is verified by the village revenue officer who then sends a list of farmers qualified for loans to banks. Banks should provide loan to all cardholders without asking for revenue records. Crop loan, which is available to all farmers, is interest-free up to Rs 1 lakh. Those who repay in time are eligible to get a loan of up to Rs 3 lakh at an interest rate of three per cent. 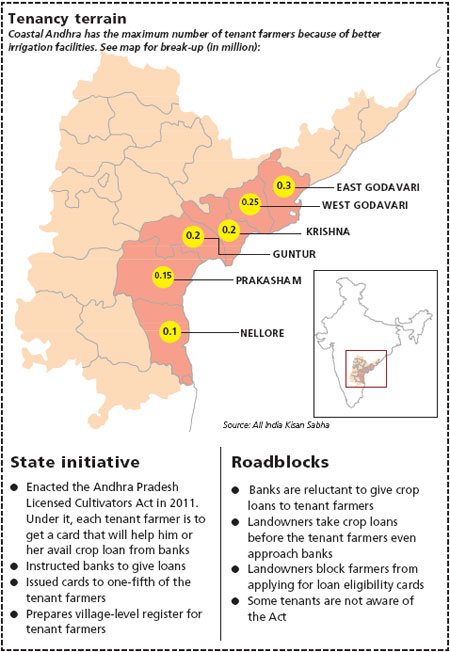 Even if Haribabu of Tatiparthi village had a loan eligibility card, getting financial assistance would not have been easy. The system of issuing cards and disbursing loans is riddled with problems. In 2011-12, the revenue department issued 576,147 cards and banks sanctioned loans worth Rs 393 crore, less than one per cent of the total agriculture loan (Rs 58,000 crore) disbursed that year. Only 32 per cent of the cardholders received loan. In 2012-13, the number of cards issued as well as the loan disbursed reduced. The department issued 423,328 cards against a target of 1,250,000, while banks disbursed Rs 270 crore against a target of Rs 2,000 crore fixed by the agriculture department.

In 2012, only 15 per cent of the cardholders received loans—after a prolonged struggle. “We held agitations for two months in front of banks and revenue offices,” says Pellapothu Reddy, a cardholder from Kothuru village in West Godavari district. He, along with other cardholders, was asked to produce no-dues certificates from all banks in the area. “They asked for written consent of land owners and sureties even when the revenue officials had sent the list of tenant farmers eligible for loan,” he says. He and five other farmers managed to get Rs 1.2 lakh, but only after forming a joint liability group.

In many cases, landowners or small farmers avail crop loans much before tenant farmers do. Since banks do not provide loans to two persons for the same land, tenants have the option of either availing personal loans (interest rate 12 to 14 per cent) or approaching moneylenders. To get personal loan, assets have to be shown which tenants farmers do not have. “Banks are reluctant to give short-term loans. They fear tenants will not be able to repay,” says Parvathy Subramanian, joint commissioner in the office of the Chief Commissioner Land Administration, the nodal agency for implementing the Act. “We have even offered to help banks in the recovery process.”

Since the loan eligibility card is a legal document for tenancy, landowners fear the cardholders may claim rights on the land at a later stage. In many villages tenant farmers could not apply for cards because of threats from the owners. “My landowner said he would give his land to someone else if I applied for the card,” says Gangula Jayaraj of Pothunuru village in West Godavari.

A study by a Hyderabad NGO Rural Development Centre in 22 villages of five districts found that many revenue officials colluded with landowners who belonged to their community to block loan eligibility cards. In some villages, tenant farmers were charged Rs 10-100 for card application forms which are otherwise free of cost. In Palkaveedu village of Nalgonda district, each tenant farmer was asked to pay Rs 5,000 for cards and loans, notes the study. It observes that 80 per cent of the tenants still depend on private moneylenders.

“Due to these roadblocks, tenant farmers do not apply for the cards,” says Malla Reddy, state president of AIKS. In 2012-13, the revenue department received 200,000 less applications compared to the previous year.

State revenue minister Raghuveera Reddy, however, is hopeful the situation will improve. “This is a new piece of legislation and will take time to bring about changes on the ground,” he says.