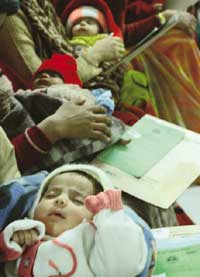 In India, as in the rest of the developing world, the new vaccination regime is taking root. But to blame global players alone would be giving the Indian government’s medical establishment to generous an absolution. The whole system is in a mess. Which means, at the end of the day, as far as vaccines go, you can’t be sure whether what you get is really what you need.

Reproductive and child health rapid household surveys carried out in 1998-99 and 2001-2002 showed that 72 per cent of districts showed a decrease in immunisation rates — evidenced by a marked increase in the number of districts that had a DTP 3 coverage of less than 30 per cent. This suggest that the delivery system needs to be revamped. A comparison between the pulse polio programme and UIP shows why the situation is so bad.

The polio vaccination programme is ‘externally’ funded — meaning donors provide the oral polio drops. But the delivery mechanism is, obviously, the State’s. As the government concentrates more and more on this showpiece programme, UIP takes a backseat. Which means that the success of the polio programme is not being replicated across the board — in 2004-05, US $201 million was spent on the polio programme, while only US $35 million was spent on routine immunisation.“ The way out of this problem is to integrate the polio programme (campaign) into the regular immunisation programme,” says Onkar Mittal, convenor, Swasthya Neeti Samvad, an NGO that works on health policy.

mohfw officials say there is no shortage of funds or vaccines. But given the coverage figures, this does not seem to wash. "If despite poor vaccine coverage against six diseases, the government is saying sufficient money is available to introduce new vaccines, it has misplaced priorities," says Sanjay Chaturvedi, professor of community medicine, University College of Medical Sciences, Delhi. If surplus money is available, it can be diverted to provide essential amenities like safe drinking water in slums and villages, he adds.

There is also a debate about over-intensive anti-polio vaccination that is not being addressed. Mittal recently analysed the data from the polio programme and concluded that repeated doses of polio vaccine are causing increased paralysis in children.

As of now, the private sector is supplying most of the vaccines that are keeping uip going. When uip was launched in 1985, the public sector was not up to supplying vaccines in adequate amounts. As a result, in 1986, the Technology Mission, headed by the prime minister, was launched to involve the private sector. The problem is that market shifts make the role of the public sector crucial. 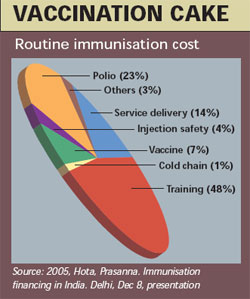 The contribution of public sector vaccine-manufacturing facilities in the country -- primarily the Central Research Institute (cri), Kasauli, and the Pasteur Institute of India (pii), Coonoor -- have played a marginal role in outfitting uip (see table Big capacity, small output). cri produces small amounts vaccine --in terms of targets, capacities and the country's requirements. If abdication is an issue, take typhoid. cri used to make vaccines for the disease, but discontinued. Now, the private sector has taken over the job. iap wants it to be part of uip .

C M Agarwal, the mohfw official responsible for cri, says the organisation employs 1,000 people, but is not forthcoming about what they are doing. Repeated requests for permission to visit the cri facility were stonewalled. Neither pii nor cri has contributed much by way of research into innovation suited to India.

cri has other crucial functions relating to surveillance and research that it seems to have abdicated. Unfortunately, the government does not put out relevant information in the public domain. cri is also a national regulatory authority, which should be able to perform thorough evaluations of all new vaccines and take informed decisions with regard to authorisation of trials, licensing and performance of vaccine after licensing.

But, this work has been reduced only to monitoring whether the vaccine is meeting quality criterion. Specialised functions are going by default -- for instance, tracking salmonella and other diseases for which vaccination is a possibility.

Without any regulation, vaccines are being introduced in the country without data. To make things worse, there is little post-marketing surveillance.