Despite numerous schemes, financial allocations and "election-time" promises, drinking water is still a scarce commodity. Public participation in most government projects is missing, and planners do not seem to look beyond today's requirement 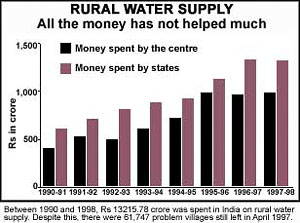 "We have not failed," says S R Hashim, member secretary, Planning Commission, commenting on the country's water woes. "Problems are acute only in a few areas. We are chasing the problem, but it remains ahead of us," he defends. However, he agrees that most political decisions have only short-term gains in mind.

"The people are gullible. The politician promises only for 'tomorrow' while India's water requirements need long-term planning," reasons Henk Norden, director of the water and sanitation programme of unicef . But long-term solutions will take time and people are not ready to wait. This compels governments to invest in handpumps and borewells.

Even the handpump schemes that are implemented with so much enthusiasm become useless soon due to of lack of maintenance.In 1994, a Government of India survey found that more than 33 per cent of the handpumps installed through various schemes required repair, while some 22 per cent required rehabilitation. Some 12 per cent were completely defunct (See chart: Out of order) .

Farmers get electricity and irrigation pumpsets at highly subsidised rates and can drill as deep as they want for water to irrigate their fields. In states like Punjab, Haryana, Gujarat and Uttar Pradesh, 85 per cent of the irrigation is done through groundwater sources. Though the state and Union governments know that subsidised electricity and pumps only encourage indiscriminate borewell digging, very few are willing to cut down on the subsidies for fear of losing their votebank. Says Kanchan Chopra from the Institute of Economic Growth: "Solutions are targeted at the individual farmer and completely bypass the issue of overall scarcity of water."

In Maharashtra , borewells cannot be drilled within 500m of a drinking water source. Gujarat, Madhya Pradesh, Tamil Nadu and Pondicherry, too, have similar laws. However, so far, only Maharashtra has achieved any perceivable impact. Hashim says, "Legislation is all right but enforcing it is very difficult."

Take Chennai for instance. Here, the government introduced a bill, called the Chennai Metropolitan Area Groundwater (Regulation) Act, 1987, to regulate over-extraction of groundwater as well as its transportation to other parts. However, even now, private lorries carrying water from one part of the city to another operate freely.

Then there is Rajasthan, where wheat and sugarcane are flourishing. Rajasthan is suffering from yet another kind of problem. Here, according to experts, dryland agriculture should have been encouraged. "In the beginning when the project is formulated, water is there but the demand is not," Hashim explains. "So the farmer starts growing water-intensive crops. Slowly, the cropping pattern gets established and the entire economy starts depending on it. It becomes difficult to reverse the trend even if the region witnesses water scarcity.


Till even a few years ago, most took groundwater's purity for granted and did not care much about testing its quality before digging wells. Matters are still the same. Planners have fallen into the classic 'quantity, and not quality' trap. Water monitoring facilities in the country are either non-existent or are at absolute infancy. "Testing is done only where there is an outbreak of diseases," says Norden.

Supplying rural populations with clean drinking water often figure low in the government's list of priorities. According to the rgndwm the ministry of water resources ( mwr ) spends almost 80 per cent of its budget on projects involving large dams and canals. The rest, only a meagre 20 per cent, is left for drinking water supply schemes (see table: Rural water supply ). Further, rural water supply is the responsibility of the ministry of rural development. The mwr, which handles the maximum finance for water, has no role in these water supply schemes. These and other bureaucratic hurdles further add to the problem of water scarcity.

"Water-harvesting is an inter-sectional issue where many sectors, including the private sector, are involved. But none of the departments agree to work one another," says Joshi.