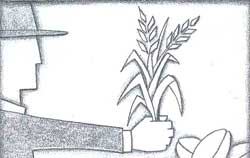 THERE are some in India who believe that the Dunkel Draft (DD) would lead to a reduction of subsidies paid by developed countries to their farmers and this would help agricultural produce exports from India and other developing countries. They are the victims of an illusion created by the DD that it aims to reduce agricultural subsidies. What DD aims to do is to change direct subsidies to indirect, but provide enough room for developed countries to continue to subsidise their agriculture.

The loopholes available to the developed countries are subsidies that are exempt from the calculations of the aggregate measurement of support prices, such as payments to farmers that are unrelated to production levels. This so-called "de-coupled income support" involves environment-related subsidies and subsidies for backward regions. That these indirect subsidies can totally neutralise the effect of any reduction of direct subsidies is shown by the case of "de-coupled income support" in the European community.

In June 1992, the European Economic Community adopted a regulation dealing with the support to be given to some arable crops. According to this regulation, beginning 1995, cereal growers will be paid ECU (European currency unit) 207 per ha (Rs 8,000 per ha) and oilseed growers will be paid ECU 359 per ha (Rs 15,000 per ha) beginning this year. Clearly, with this kind of subsidy, European farmers will be able to compete effectively in the international market even if their export subsidies are withdrawn. It is another matter that the DD is not demanding elimination of export subsidies given by these countries, but only ensuring limited reduction. The point is that even the limited benefit from these reductions is going to be taken away by such subsidies as "decoupled income support".

This change in the form of subsidy allowed by the DD means, in effect, that European farmers will continue to be competitive even when their production cost is higher. Indeed, the texts on European agricultural reform make it clear the aim is to make exports competitive while protecting living standards of farmers. It is no one's position that European farmers should not be compensated for loss of income. The problem is that the indirect subsidies are also applicable to exports and this will mean international agricultural markets remain as distorted as they are now. Developing countries would be sadly mistaken if they expect the DD to level the playing field for them. Criticism of the DD's indirect subsidies should not be construed as a brief for free trade or support for the policy of exporting agricultural products from hungry developing countries. It is made to show people willing to accept the DD's unpalatable aspects in the hope of gaining dollars by exporting agricultural products, have not thoroughly analysed the Dunkel proposals. The lure of earning foreign exchange has made the Indian government accept in principle the opening up of Indian markets to import of agricultural commodities, the application of international discipline on domestic agricultural policies and the introduction of plant breeders' rights (PBR).

Of these, PBR has gained the most attention, as a form of monopoly rights similar to patents and applicable plants. The government has been trying to make PBR acceptable to Indian people by insisting that the right of farmers to their seed stock will not be compromised. While the DD does not demand a regime immediately that would take away the farmer's seed rights, this might happen after the policy is reviewed in four years.

What will happen immediately is that the new seeds that come into the market and are covered by PBR can be commercially multiplied only with the breeder's permission. This legalised monopoly will result in an increase in seed prices. In the US, such monopolies have doubled the price of soya bean seed. In situations where competition is lacking with publicly bred varieties, seed prices could increase higher.

Today, farmer-to-farmer sale of seed plays an important role in the spread of new varieties in India and the stress should be on improving these sales. But PBR will wipe out such farmer-to-farmer sales and severely affect small seed companies, of which there are hundreds in India, supplying seed that is healthy, uncontaminated and productive.

Supply of good-quality seeds plays a crucial role in agricultural development, but an obsession for new seed varieties should not blind us to the enormous need for the services provided by the small seed companies. Under a PBR regime, these seed companies would be forced to close or be taken over by big companies, especially multinationals. The fact is that instead of seeing PBR as an instrument to promote innovativeness, it should be seen as an instrument to establish the hegemony of multinationals over the Indian seed industry.

Usha Menon is a member of the National Working Group on Patent Laws.