...although the now bald pate of Iceland was once resplendent with grass and verdant willow, rowan and birch forests 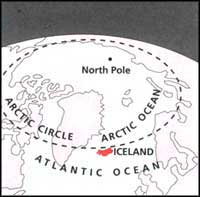 QUESTION: What do you do if you get lost in an Icelandic forest?
ANSWER: Stand up

You've got it right, because how do you get lost, when there is no forest? Less than 1 per cent of this Arctic Circle island's expanse of 102.776 thousand square miles is wooded, and less than 25 per cent has vegetation. Sparse grazing lands occupy 1/5th of its land area. The rest is mostly glaciated or covered with peat bogs and lava desert. Only 5 per cent of Iceland's population is engaged in agriculture because its soil requires heavy fertilisation. The centre of Iceland is uninhabited because more than half its population lives in Reykjavik.

But medieval accounts of Iceland's settlement or landnam (landtaking) speak of an island fully forested till the 8th century AD. The "Book of Icelanders" (Islendingabok) compiled by a prominent settler, "Ari the Wise", in the mid-12th century, as well as the "Book of Settlements", a 13th century work, unfold the histories of 400 Norse settlers and how they parcelled out a pristine ecosystem among themselves.

Iceland's medieval texts say the island was discovered around AD 860 by sailors from western Norway who were blown off course while sailing to the new colonies in the Faeroes. They found the land suitable for farming, fishing and stock raising. Uninhabited forests stretched from the shoreline to the mountains. A few exploratory voyages gave them a better picture of the island's resources and it was colonized.

Icelands's 1st permanent settler, Ingolfur Arnarson established his farm at Reykjavik in AD 870-4. Gradually, rebel chieftains in Norway resisting the King, Harald Fairhair's intensified efforts at creating a united Norwegian state, found a safe haven in the wilds of Iceland and settled there. The first few of them settled close to the coast and gradually moved inward, making claims on more territories, living off fish and Iceland moss (cetraria islandia). By AD 930, all of Iceland had been settled.

"Medieval texts are really political statements meant to create a sense of identity among settlers," states Smith. Early Norse settlers composed immensely moving and poetic family sagas, but these are biased accounts. Those who came first owned the land, and family histories were manipulated to prove their claims to disputed property.
For instance, the rebel chieftain Kveld Ulf and his son Skallagrim sailed for Iceland, but Ulf died enroute. Skallagrim established a farm at Borg, near the river Borgarfjodur, in western Iceland. He claimed extensive tracts of land and began doling out portions of it to his slaves and kinsmen. Skallagrim's family soon became the nucleus for a dynasty exercising political authority over the area. But Snorri Sturluson, a rival chief, challenged him. And Sturluson's saga contradicts all of Skallagrim's claims.

Archaeological evidence suggests that in AD 850, sixtyfive per cent of Iceland was vegetated and birch woodlands covered at least 25 per cent of the land. Lowland areas were covered by woods with shrub-sized birch, willow and rowan. Birch woodlands consisting of crowberry, blueberry, heather and recumbent willows mixed with grasses, sedges and forbs, would have sloped into heathlands near the coastal regions. Low-lying waterlogged areas would have been covered by wetland ferns consisting of sedges, bogbeans and cinquefoil. At higher altitudes the woodlands would have thinned, leaving the coast clear for hardier, cold-tolerant grasses, sedges and forbs. The only land-mammal privileged to live here, the arctic fox (Alopex lagopus) survived by raiding the nests of migratory birds and scavenging the carcasses of marine animals. There was walrus, now extinct in Iceland, and polar bears. During Iceland's brief summers the seas, cliffs, woodlands, lakes and heaths teemed with flocks of migratory birds from Europe, North America and Africa. Falcons, swans and sea eagles stayed during the winters too. Rivers teemed with trout and salmon, and coastal waters with pelagic fish.

Human settlements in Iceland transformed its ecology as early as 9th century AD. The introduction of cattle cereals and sheep meant the emergence of weeds and insects. Earthworms also arrived as stowaways in the ballast and dunnage of Norse ships. Norse settlers burnt large tracts of forests in order to convert them into farms.

What can be gauged through the foggy historical sequence of settlements is that erosion and deforestation had set in by the 12th century: a farmer had to walk 5 km to find a smithie because there was no wood available locally. Ships could not be built and there was a premium on what remained of the birch forests.

But this is just half the story. According to Smith, pollen analysis records provide a vital clue. They show an abrupt rise in the pollen of grasses and sedges, alongside a dramatic decline in birch pollen. This suggests a rapid assault on the woodlands. In many locations the decline of the birch is accompanied by a rise in the pollen from indigenous forbs and heathland species before pastures of grass and weeds took over. This means that birch forests were destroyed much before farmsteads were established, or intensive grazing took place. Destruction of the birch forests was, therefore, due to another set of activities. The site of Hals says it all. Hals is located 40 km inland in western Iceland. It used to be a small farmstead dating back to the mid-10th century and was abandoned in the 13th century. Test excavations, systematic coring and soil phosphate tests were conducted between 1987 and 1991 across the 2.1 ha area of the medieval farm's core. Large fragments of charcoal, an iron producing complex covering 0.2 ha were found near a marsh.

Birch and willow charcoal from the slag heaps and charcoal pits indicate that the ridge and bog-edges were forested when iron production began. Birch charcoal has been radiocarbon-dated to the late 9th century.

In addition, 3 slag heaps, a furnace pit, hammer scales and a Norwegian schist whetstone were identified. Hals was a smelting centre, producing and repairing tools. "The volume of slag estimated was 1650-3000 kg and produced 300-650 kg of iron. Just 1 of Hals slag heaps contained enough iron to satisfy the needs of a single farm for 30-40 years. It destroyed about 10 ha of forest. And this is a conservative estimate," states Smith. Iron production, plus charcoal burning were responsible for destroying Iceland's forests even before farms were established.

Slag and charcoal concentrations have been found beneath walls and floors of 10th century farm sites across south, east and north Iceland. In coastal sites, such as Reykjavik and Grelutottir these smithies are small in size and are cramped into tiny spaces within farmsteads. They produced modest amounts of slag, about 250 kg. But inland sites were large open air complexes and located at some distance from the farmsteads. It is hard to say whether small amounts of iron were produced over short periods of time or whether sites like Hals specialized centres of iron production.


Two-thirds of the permanently settled sites in the 10th century show that farms were established after burning the woodlands. Some 40 per cent of these also have iron residues. Forests cleared for iron production or intentional burning would have been lucrative farm sites, requiring no labour to clear the land.

The livestock browsing which followed made it almost impossible to regenerate the birch forests. The hairy white birch, when protected, grows to a length of 8-12 metres. But fire, felling, livestock browsing and soil acidification stunted its growth to 3 metres. At this height the tree is easy fodder for goats and sheep.

Deforestation also reduced the extent of the subcanopy snow beds which provide ideal conditions for the survival of birch saplings throughout winter. It led to the expansion of the heathlands, blanket bogs and erosion of fields. Erosion, in fact, began within a century of land clearance and settlement. Use of upland areas for iron production, fuel gathering and sheep pasturage, all led to the early spread of erosion. As pressure from humans and livestock increased it would have been harder to revive the forests even in their shrubby forms.

The environmental fallout arising out landnam finally affected Icelandic society too. Conflicts between 5 powerful godur or chieftains, over land capture, their eventual subjugation by Norway, the ruin of the shipbuilding industry and the need to look to Norway for timber and cereals now reigned in a once fiercely independent people.