Not par for the coarse

Not par for the coarse 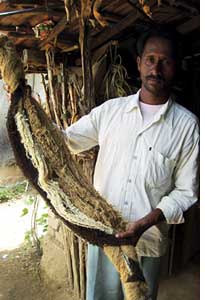 In Maharashtra, the market is deserting weavers of traditional water-proof blankets

Elderly Anglu Kannawar would rather have his sons use the wool from his sheep as stuffing for mattresses than take to his beloved loom again. "There was a time when I was famous in surrounding villages for the fine weave of my ghonghdis (blankets)," said he. "But it is not worth weaving any more. A lot of labour goes into making a ghonghdi, and the price it fetches is the same Rs 125 per piece (Rs 400 for a double size) it would 15-20 years ago."

Pandurang Kannawar, Anglu's elder brother, who still weaves out of sheer habit, can't sell more than seven ghonghdis a year. "What else can I do? This is what I have done all my life," he said.

The Kannawar brothers belong to the semi-nomadic community of sheep rearers called Dhanghars.For generations they have woven ghonghdis out of the coarse wool of mendhi sheep found in the Vidarbha region of Maharashtra. Two decades ago ghonghdi was an essential possession of every rural household in eastern Vidarbha. It was more than a blanket; it was a raincoat and a doctor too. Over time cheap, machine-made blankets have driven ghonghdis out of the market.


But the Dhanghars vouch for the wool's distinct qualities. The coarseness of the wool makes it water-proof. "Since it does not soak water one can remain dry under it in a heavy shower," said Kannawar senior. "You have to give it just one good shake to dry it."

The Dhanghars, who spend nine months a year in the open, use ghonghdi to ward off chills and bodyache. Being warm and coarse, ghonghdi stimulates blood circulation, and its regular use can cure joint pain, bodyache and arthritis, they believe. Ghonghdi also comes handy as covering for mules, drapery and shelter. The very coarseness of the wool makes ghonghdi three to four times as durable as an ordinary blanket, claim the weavers. Ghonghdi looks virtually new even after 15 years of vigorous use; it only softens with use.

Its many qualities could not save it from the onslaught of colourful, synthetic blankets. "Those are not as warm and durable as ghonghdis," said Ramesh Ammawar of Bhangaram Talodhi village in Chandrapur. "But they are eye-catching and fashionable."


Ammawar said people are aware of the benefits of ghonghdi but they hesitate to pay its actual cost. "We receive many enquiries every year, but most people end up not buying because they are unwilling to pay more than what they pay for the other variety." As a result, the price of ghonghdis has remained static for over 15 years.

Making ghonghdis is labour-intensive. The wool known as bura has to be washed several times to remove dirt--not an easy task considering it does not soak water. Since the wool is coarse ginning and spinning are tough. "Ginning has to be done at least four times, and spinning, which is done with a wooden spindle against the bare skin of the thighs, causes sores on the thighs and hands," said Durgabai Yarewar of Khedi village in Chandrapur. Durgabai's family is one of the four in her village of 200 households who still weave ghonghdis. The spun yarn is coated with tamarind seed glue to make it fit for weaving.

In all, it takes no less than 30 man-days of labour, the wool of at least eight sheep (each sheep yields around 500 gm wool twice a year) to produce one double-size ghonghdi.

"Considering the labour and the quality of the product, we need a selling price of at least Rs 500 for a single blanket and Rs 1,000 for double," said Durgabai.


At one time, there was a loom in every Dhanghar household in the Gadchiroli-Chandrapur area. Elderly members of the household would make ghonghdis, while the younger ones went out with herds, said Bira Pochu Ammawar of Bhangaram Talodhi. "Now you will be lucky to find one loom in a village," he said. Of the 18 villages of Dhanghars in the two districts, only Navargaon in Gadchroli has a functioning loom in every household. But even here clients, mostly Dhanghars themselves, are not able to pay more than the market price. "There is no profit in the business," said Rekhabai Medpalliwar of the village. "We do it because we are able to sell 50-100 blankets a year, which yields some income; it is better than none."

The Dhanghars have tried to use the wool differently. Four years ago a few young men in Chandli Budruk village of Chandrapur began making mattresses of bura. "It needs less labour," said Vilas, Anglu's son. It also takes less time since the wool is not ginned or spun. The mattress gives all the benefits of a ghonghdi without its prickliness. It drew the rural clientele but soon problems surfaced. The sheer amount of wool consumed by each mattress (ranging from 7 kg to 12 kg) and quick manufacturing rule out the possibility of every family benefiting from this innovation. "The demand in the neighbourhood is 400-500 mattresses a year, and four-five families can supply that much," said Vilas. The remaining 100-odd families sell their wool to these families.

About three years ago labour union Shramik Elgar trained some weavers in making decorative and utility items on the lines of jute handicraft. Bura comes in shades ranging from white to buff to coffee to grey, which can be combined to produce a striking effect. But after the initial enthusiasm, people lost interest. Today only two families make these items for a very select clientele.

Neither the art of ghonghdi weaving nor the blanket's health benefits are recognized by any government handicraft or health agency, and this makes it difficult to find urban markets for the products, said Paromita Goswami, president of Shramik Elgar. With shrinking market and pastures, the art of ghonghdi weaving is on the verge of disappearing. "We want the government to provide us secure pastures and markets for our wool," said rearer and weaver Lingaji Durtiwar of Bhangaram Talodhi. "Our wool is not inferior, it's different."