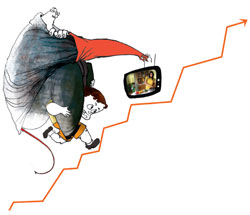 The junk food industry is once again in the eye of a storm. This time not just for its unhealthy content but for trying to mislead the public through advertisements which link its food with physical exercise.

Sample this. A recent ad for Maggi Atta noodles featuring actress Madhuri Dixit shows children playing a video game sitting inside a house when they hear screams of “goal”. They rush out to see a fit and healthy mother playing with other children. She inspires them to start playing outside. Hungry after their activity, they want to eat something as interesting as a football game. What else but Maggi Atta noodles, the so-called “wheat version with nutrition of three rotis and vegetables”. Since the commercial was released in early June, Nestle has aggressively campaigned with it on the social media with the tagline “health is enjoyable”.

Yet another ad, of Nada Maida (a brand popular in South India), tries to portray that consuming maida (white flour) will make young children energetic. Linking junk food with health is not restricted to India. A youtube ad of Coca Cola, meant for the western audience, makes it seem a fun exercise to earn a can of coke. The ad, which received more than 200,000 hits in one-and-a-half months, asks participants to burn 140 calories to win a can of coke. Burning that much calories requires 23 minutes of physical exercise, the ad claims. It ends with the audience cheering for the people who “earn” their coke.

The industry’s linking of physical exercise with junk food can hardly be construed as a responsible response to criticism of selling unhealthy food for decades. The question being asked is whether these ads or foods even inspire a culture of physical exercise. Rahul Prakash, a XII standard student and a volunteer with Delhi non-profit Uday Foundation, says: “This (Atta Maggi) ad is like surrogacy. They are just trying to sell the pack in the name of health. Promoting physical exercise when children are addicted to in-house games is just a mask.”

The target audience in such advertisements is mothers of young children. Deepti Patil, mother of two, now gives Maggi Atta noodles to her children because she thinks it is healthier. “My children are fond of Maggi and eat it at least four times a week,” she says.

Nestle’s justification for calling the product healthy is that it matches international standards. “codex guidelines that are followed internationally require 3 gm dietary Ã”Ã‡Â¿fibre per 100 gm as adequate threshhold. We state on the pack that Maggi Vegetable Atta Noodles contains 5.3 gm of dietary fibre Ã”Ã‡Â¿per 100 gm (of the noodles) and the fssai-accredited laboratory has confirmed that the products tested by them contained more Ã”Ã‡Â¿than the declared fibre value,” said Nestle in an email response to Down To Earth.

But while atta noodles might be healthier than white flour noodles, they are not a healthy diet. A 2012 study by Consumer Education Research Centre (cerc), a non-profit working on consumer rights, showed that atta noodles are among the highest Ã”Ã‡Â¿sodium-containing instant noodles. “The devil lies in the tastemaker. Most of the salt content is in the seasoning. Flavour enhancers are unhealthy too,” says Pritee Shah, chief general manager of cerc in Ahmedabad.

The cerc study also found that fat in atta noodles was actually 17 per cent against 13.4 per cent claimed on the packet. “These people are shifting focus from healthy to something marginally better than the worst, like white flour products,” adds Shah.

Junk food has other harmful ingredients too. For instance, Maggi noodles are high in not just sodium, but carbohydrates and food additives as well, and low on essential elements like fibre, vitamins and minerals. Atta noodles, despite claims, are no exception.

“The commercials create the impression that fat and calories are the only problems with junk food and exercising can solve the issue. But junk food contains harmful contents,” says Ashim Sanyal, chief operating officer of Ã”Ã‡Â¿consumer magazine voice.

In the US, the Coca Cola commercial has provoked outrage. Public health activists there called it a tactic to score brownie points in the name of promoting a healthy lifestyle. “A 12-ounce (350 ml) bottle of Coca Cola provides about 140 calories. Coca-Cola would like you to think that 140 calories is trivial to compensate for with physical activity. But those calories come with no nutritional value and should be thought of as candy in liquid form,” says Marion Nestle, professor of nutrition, food studies and public health at New York University.

Linking health and nutrition with junk food has, however, become a necessity for the industry if it has to survive. In the US, sales in the soda industry are already on the decline in the last few years. They fell by 3 per cent in 2013, compared to a decline of 1.2 per cent the year before, according to Beverage Digest, a trade publication in the US.

“Companies like Nestle and Coca-Cola are desperate to distract attention away from their unhealthy products by pretending that exercise is the solution to a poor diet,” says Michele Simon, president of a US food Ã”Ã‡Â¿industry watchdog Eat Drink Politics. “Science shows that exercise cannot counteract eating junk food. Such ads only serve to confuse the issue and make the junk food companies look good,” she adds.

Another category of products misleading consumers with claims of healthy food is digestive biscuits. voice conducted a test on four types of such biscuits—Anmol Tejus Digestive, Britannia NutriChoice, Horlicks Nutribic and McVitie’s Digestive. The products were tested for total fat, saturated fat, sugar and salt content against the standards set by Food Standards Agency of the UK.

All biscuits were found undesirable for saturated fat and sugar, three were neutral for total fat while one was undesirable. Only Horlicks fell in the category of desirable for salt, which means it had a salt content of less than 0.3 gm per 100 gm.

In India, the Advertising Standards Council of India, a self-regulatory voluntary organisation of the advertising industry, receives maximum complaints under the personal and healthcare category. In June this year, 46 of 124 complaints fell in this category alone. In all, 84 of the complaints, including Nada Maida, were upheld by the council.

Currently there is no mechanism to prevent misleading advertisements in India. “The manufacturers have to only abide by the provisions made in Sections 24, 52, 53 of the Food Safety and Standards Act. The provisions are broad and generic, so advertisers/manufacturers are getting away with all types of false claims,” says Shah.

“We are demanding that if an ad is objectionable and makes misleading claims, then the celebrities endorsing it should also be held responsible,” she says. Activists also suggest that if a commercial is found misleading, then the company should be asked to run a corrected ad for as much time and space as it ran the previous one. “Right now, companies are only asked to withdraw the objectionable ad,” Shah adds.

The government is planning to amend the Consumer Protection Act, 1986, to Ã”Ã‡Â¿establish a consumer protection authority. Ã”Ã‡Â¿It will take action against misleading ads.