Three months after Gujarat was flattened by an earthquake, the state government goes in for a relocation plan to satisfy the builder's lobby 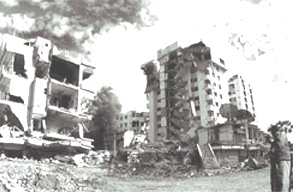 "Uncleared debris is a grim reminder of the tragedy. It stops the mind from functioning, prevents action on part of the people. It is a hurdle to moving ahead."

more than the earthquake that ravaged Gujarat on January 26, it is the slow pace of the relief operations that is devastating the lives of the quake victims. It is now more than three months and the government is yet to come up with a rehabilitation package. Rather, the state administration is making a mockery of the situation by organising Kar Sewas -- volunteers from the ruling Bharatiya Janata Party ( bjp ) -- to rebuild the quake-affected areas.

The landscape is at a standstill and the debris is yet to be cleared. In the temporary shelters, people suffer a scorching summer with temperature touching 46 c . Pathologically inert state machinery now wants these people to work under Gujarat's third consecutive drought to clear the debris. If the debris is not cleared, there will not be any new construction. If new houses are not built within few weeks, one million families will have to spend the four-month monsoon without a roof.

Without a rehabilitation package, the state government is still pondering over how to remove the debris. In April, the state's chief minister, Keshubhai Patel, claimed: "Before June 15 (when the monsoon arrives in Gujarat), 800,000 new houses will be built and debris will be cleared within a month." "That is a cruel joke," says Digant Ojha, the spokesperson of Citizens' Initiative, a federation of some 100 non-governmental organisations working in the relief operations. If the past is of any indication, in the Latur earthquake, the delay in clearing the debris led the government to abandon the rehabilitation process and settle for relocation.

To cover up its incompetence, the state government has come up with an idea to relocate four towns -- Bhuj, Bachau, Anjar and Rapar. Experts feel that the government is trying to shy away from the enormous task of removing the estimated 20 million tonnes of rubbles. But local residents and organisations working in rehabilitation oppose the government decision vehemently. In fact, the World Bank, that is funding some rehabilitation projects, has put the condition that there should not be any relocation of any village or town.
The issue of relocation is now being seen as a move on the part of the government to please the influential builder lobby. The state government, that is alleged to have a nexus with this lobby, has been trying to shield powerful builders from legal action arising out of the several cases that were filed in Ahmedabad where around 70 high-rise apartments collapsed killing around 700 people in the earthquake. Experts feel that by trying to relocate the towns and villages, the government has gone against the wishes of those people who want to rebuild their own houses. According to official figures, the government will build around 800,000 houses.

In a letter to the chief minister, the Ahmedabad Study Action Group ( asag ), an ngo working on rehabilitation and policy issues said: "If the government has to rebuild thousands of houses within a few months, it will only generate one kind of organisational response: big contractors, fast-building technologies, massive procurement, high flying professionals." It added, "If 200 panchayats are to rebuild the houses, and more importantly that each family is to rebuild or repair their own houses, it would generate an entirely different kind of organisation response: local people, small contractors, indigenous materials and technology. "

Experts feel that this is the worst thing that these organisations can expect from such a government decision. "By constructing 800,000 houses on its own, the government is ignoring the people's wishes," says Mihir Bhatt, director, Disaster Mitigation Institute, Ahmedabad. "In Latur, the government built and relocated villages but now the people use them as cattlesheds."

There are no panchayats in the state at present. Therefore, the government, after making a half-hearted effort to involve the people through village meetings, has gone ahead with the relocation process. Government claims consensus on this move, but there are protests everywhere, particularly in the worst affected areas, observe experts.


The state has been polarised between supporters of relocation -- led by the tainted industry minister Suresh Meheta -- and others led by prominent ngo s supporting rehabilitation. In fact, ever since Suresh Meheta came out in support of relocation, the government never thought of clearing the debris. As there is no consensus now and the reality of the typical caste-based society confronts the leadership, the government finds itself in a helpless situation. "When the government has not been able to come up with a rehabilitation package even after three months, it only reveals a sheer lack of vision and understanding of the seriousness of the problem," says Bhatt.

Relocation of a town means that areas have to be acquired and large-scale construction work must be taken up on a war footing. ngo s allege that many politicians and builders own the lands that will be acquired by the government to relocate the towns. In fact, the state government's urban department's records reveal that the builders who stand accused in Ahmedabad own large plots around these towns. "The government has to buy these lands at premium in the case of relocation," says a high level official of the Ahmedabad municipality corporation. He claims that there have been pressures on government engineers and urban planners to recommend relocation.

An assessment of the urban development ministry shows that in the case of Anjar, hardly 50 per cent of the people agreed for relocation. Even those who supported relocation wanted the government policy to be made clear. The question of ownership of the land and the amount of land to be given are the crucial issues that haunt the state government. Similarly in Rajkot, the ministry assessment says that 90 per cent of the affected villages do not want to be relocated, as they believe that debris clearance is easier in rural areas and the rural people can't relocate due to their unique socio-economic structures.

Various expert reports and past experiences show that relocation efforts have always failed and led to further problems. In fact, relocating families under different welfare programmes where the government has built houses has also not proved effective. It gets even more ineffective when the process is not participatory as is being witnessed in Gujarat. For example, under the Indira Awas Yojana and the state government's village rehabilitation under Sardar Sarovar Yojana is virtually abandoned within one month of being allotted. Similarly in Latur, which was partially relocated, new colonies have been abandoned.

Relocation causes problems in getting back the same socio-economic environment. Relocation is a common, immediate response of the affected people as the devastation always forces them to get out of the place. However, in very few cases when the place at the centre on some major fault lines, relocation seems to be the safer option. Though the state government has conducted a survey on the major, medium and low fault lines and found that some of these places are on major fault lines, relocation to just a few kilometres away from the old place does not make much sense.

The other problem with the rehabilitation programme is that the government is succumbing to more and more offer of adoption of villages. Under this, a department or an organisation adopts a village and implements its own rehabilitation programme. "This hijacks people's own initiative to rebuild their life, thus making all these schemes short-lived," says Mihir Bhatt. Says Digant Ojha: "The government should not allow the adoption of villages and the rehabilitation should be in partnership with the people with the government as the facilitator." Agrees Sudershan Iyengar of Gujarat Institute of Development Research: "The best role for the government is to facilitate not to be a doer."