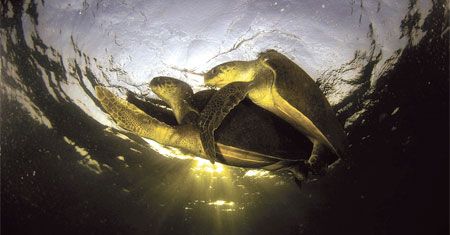 On February 26, as night fell on the tranquil Gahirmatha beach in Odisha, thousands of Olive Ridley turtles crawled in. Using their rear flippers, they dug pits in the soft beach sand and started laying eggs, more than 100 at a time. Then they skilfully covered the nests with sand and zigzagged their way back to the ocean as if to confuse predators about the exact location of the nests.

Two days later, another group of turtles arrived. When they began to dig pits, many of them destroyed the existing nests. Reason: the beach has shrunk to less than one kilometre and as many as 350,000 Olive Ridleys nested on this small stretch in a span of 10 days. The impending result: hatchings will be fewer this year.

The endangered Olive Ridley turtles are known for their mass-nesting behaviour. Between December and March, they emerge from the ocean waters on to the flat beaches to lay eggs at night. The phenomenon is known as arribada— Spanish for the word arrival. The once abundant Olive Ridleys are now rapidly declining in numbers as their habitats are disappearing. Beaches in tropical eastern Pacific, central America and three adjoining beaches of Odisha—at Gahirmatha and the mouths of rivers Rushikulya and Devi— are the remaining arribada sites. Among the nesting sites in India, Gahirmatha is under severe threat due to erosion. An ongoing study by the government’s Wildlife Institute of India (WII) reveals the Gahirmatha beach—part of the marine wildlife sanctuary in the Bay of Bengal—decreased to 950 metres in 2010. In 1975, it was 32 km long. This implies five to six turtles are jostling for space in a square metre area because of which many of the 350,000 turtles that nested this year were unable to find space and ended up digging other turtles’ nests.

What are the reasons behind this phenomenal decline in the size of Gahirmatha beach? A 2009 research compilation by WII says successive cyclones have eroded the beach. Besides, a host of industrial projects are to be blamed (see ‘Attack from all sides’).

For instance, Essar Steel Orissa Ltd has been dredging sand from the Mahanadi river delta in large quantities since 2008 from a site eight kilometres from the river’s mouth. This has affected beach building. The sediments flushed from the Mahanadi’s mouth are deposited on the shores of Gahirmatha by the ocean currents that flow northwards eight months a year—a process critical to beach building (see map). Essar is using the dredged sand for land filling at its project site near Paradip port where it is building a six-million-tonne steel plant and a captive power plant. An estimated 2.2 million cubic metre of sand has already been removed. 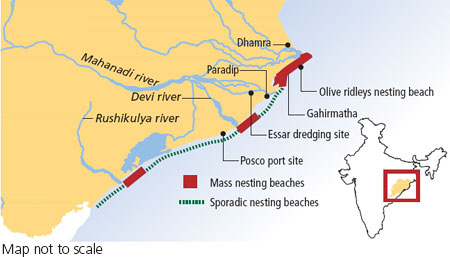 Biswajit Mohanty, secretary of the non-profit Wildlife Society of Odisha, says prima facie there appears to be sufficient grounds to link the beach erosion in Gahirmatha with the sand extracted by Essar from the Mahanadi delta. “We have asked the Union environment ministry to conduct isotope irradiation studies (nuclear isotopes are mixed with sand and tracked to the place where they are deposited) that will determine how much sand is carried from the Mahanadi to the nesting beaches.” The dredging is illegal, too.

“The place where two dredgers are sucking sand continuously falls within the confluence of the ocean tides. Essar was required to take Coastal Regulation Zone (CRZ) clearance which it has not,” says Mohanty.

Essar denies it has violated environmental laws. “We have all the necessary clearances and took permission from the water resources and irrigation department to dredge sand,” says Harendra Singh Sethi, director (projects) with Essar Steel. He adds the government should be simplifying rules rather than heeding complaints of “rogue local elements”. The “rogue local elements” Sethi referred to is Toofan Swain who lost his land to Essar’s steel project.

He accompanied this Down To Earth correspondent to the plant site and pointed out the violations. Essar is constructing a four-km-long conveyor belt that links the plant to the Paradip port. For this, it has destroyed portions of a mangrove forest on the coast. The company never applied for CRZ clearance for the conveyor line. From the Mahanadi bank one can hear the faint groaning of the dredgers. “When night falls, the dredgers move to the banks of the Mahanadi near the plant to dredge more sand. This has eroded the banks; the river is now wider by over 500 metres,” says Swain.

Essar obtained environmental clearance for the project from the Union environment ministry in May 2008 without disclosing the project involved CRZ areas. After the Paradip Krushak Mancha, a farmers’ association, and the Wildlife Society brought this to the notice of the ministry, it sought a report from the state. Odisha’s special secretary for environment, Bhagirathi Behera, says his department had sought a report from the Jagatsinghpur district authority. In January 2010, the state steel secretary asked Essar to obtain CRZ clearance. Essar is yet to apply for it.

About 45 days after the Olive Ridleys nest, the hatchlings emerge from the sand and find their way to the sea with the help of moonlight and stars reflected by the shimmering ocean water. They might lose their way once the Dhamra and POSCO ports start operating (see map). The artificial lights from the ports are likely to distract and confuse the hatchlings. Instead of heading for the the ocean, they may head for the port. As for the older turtles, they will have to find another nesting ground.