In the second week of March, activists, academics, policy-makers and experts in various fields came together in Delhi to throw light on the neglected subjects that play a critical role in climate change and are crucial from the point of view of the poor. For two days they debated four key issues-black carbon, luxury emissions, brick kilns and cook stoves-at the annual conference, Anil Agarwal Dialogue, organised by the Centre for Science and Environment in the memory of its founder. The late Agarwal was among the few environmentalists in the 1980s who argued that the poor have a higher stake in the protection of the environment. The theme of this year's dialogue, "The poor in climate change", was thus in keeping with his key message. The lowdown on the dialogue. 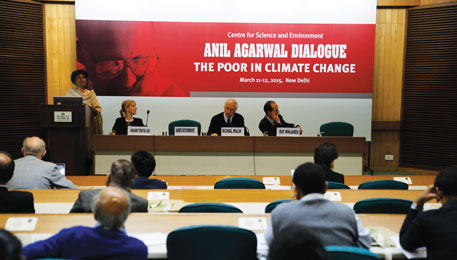 The understanding of black carbon has evolved since the 1970s, when all that the world understood was that it is suspended particulate matter—a local pollutant released due to incomplete combustion of fuel. It is now understood that black carbon comes from all combustion processes, all dust generating activities, secondary particulates (nitrates and sulphates), and from condensation of gases into liquid droplets. Unlike carbon dioxide and other greenhouse gases that remain in the atmosphere for years, black carbon’s life spans three to 10 days. Despite its short life, black carbon has claimed 1.15 million lives worldwide. But health is just one factor. There are concerns that focus on black carbon can change the geopolitics of climate mitigation responsibility. Since developing countries use poor technologies that burn fuels inefficiently, they can be blamed for climate impacts and pushed for tougher climate action. Industrialised nations, that are the biggest emitters of carbon dioxide, may delay action on reducing greenhouse gas emissions.

The transport sector is responsible for about 25 per cent of global black carbon emissions, of which 20 per cent come from diesel. Particulate air pollution is one problem that India has been trying to curb for decades, but with little success. The health costs of air pollution are quite high. More than 627,000 people die prematurely and 18 million healthy life years are lost every year in India due to ill health caused by air pollution. When CSE started its “Right to Clean Air” campaign in 1999, diesel cars were only 2 per cent of new car sales and no one believed CSE’s forecast that their numbers would explode. But the trends in diesel use in the transport sector since then have proved what CSE has been saying all along. Explosive increase in diesel vehicle numbers, use of high-sulphur diesel, outdated vehicle technology and expansion in road-based freight traffic have added to local health risks as well as global climate risks.

Brick kilns not just pollute the air, they also consume the fertile top layer of the soil. India is the second largest producer of bricks in the world and manufactures nearly 200 billion bricks a year. About 65 per cent of these bricks are made in the Gangetic plains, which have one of the world’s most fertile alluvial soils.

The reason this sector continues to be extremely damaging to air and land resources is that it still uses traditional raw material and inefficient technologies to manufacture bricks. Most of the kilns are in small towns and villages, and fall in the unorganised sector which is difficult to monitor. The Ministry of Environment, Forests and Climate Change has notified particulate matter emission standards and minimum stack heights based on the production capacity of the kiln and the technology they use. But implementation of these rules remains poor. Since the market for bricks made from fly ash or construction and demolition waste is virtually non-existent, the industry continues to use soil.

Estimates show that every year 1.5 trillion bricks are produced globally, of which 87 per cent are produced in Asia. China heads the list with 67 per cent of the global production.

About 42 per CENT of the world’s population is exposed to indoor pollution caused primarily by cook stoves. On an average, cook stoves run on solid fuels release smoke equivalent to 400 cigarettes every hour. Household airpollutants were responsible for the death of more than 4.3 million people in 2012; over 50 per cent of these were women and children.

In India, cook stoves run on dung cake and firewood cause 1.15 million premature deaths every year. Experts say there is an urgent need to shift to better stoves and clean cooking fuel. What makes the mater worse is the fact that toxic emissions from stoves are adding to the climate change burden of the world.