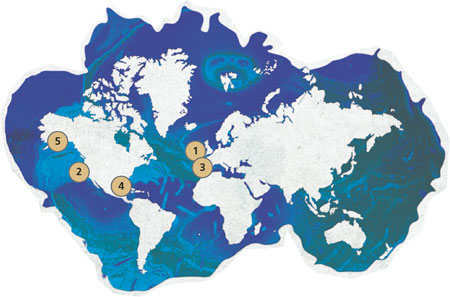 1 - March 18, 1967
The supertanker Torrey Canyon ran aground at the western entrance of the English Channel. The supertanker’s cargo of 100,000 tonnes of crude oil spilt into the sea. Four hours after the grounding, Royal Navy ships sprayed detergents on the oil to disperse it.

But small concentrations of the detergents were acutely toxic: an estimated 15,000 birds died, as well as untold numbers of fish and shellfish, and hundreds of kilometres of seashore in both England and France were contaminated. In the following years green weed grew prodigiously.

Some 3.4 million tonnes of oil washed up on a 60-km stretch of popular beaches of Santa Barbara in California. The problems began a day earlier at an offshore drilling rig, where Union Oil extracted oil from a 3,500-foot-deep well. Rescuers counted 3,600 dead seabirds; a large number of poisoned seals and dolphins were removed from the shoreline.

The spill is considered a major factor in the birth of US’ environmental movement. Arent Schuyler, lecturer emeritus in environmental studies at University College Santa Barbara, says, “People began forming environmental groups and started fighting for legislation to protect the environment.”

The accident was debated in US policy circles and in 1981 prompted a Congressional moratorium on offshore oil leasing, with exceptions in the Gulf of Mexico and parts of offshore Alaska. The moratorium remained in effect until 2008 when Congress did not renew it in the wake of the oil crisis and economic meltdown. Proponents of removing the moratorium argued America “could not turn away from a homegrown energy source at a time when the country is dangerously dependent on foreign oil and technology has made offshore oil drilling safer than ever”.

The oil tanker Amoco Cadiz got caught in a storm off the coast of Brittany, France, at the southern end of the English Channel. Within a week, the tanker split into two; its cargo of 220,000 tonnes spilt into the sea. The French government realized legal action in France would not ensure much indemnity.

It appealed against Amoco’s parent company, the US-based Amoco International, in a New York court. The French case was backed by a dozen scientists and a few lawyers. Amoco lined up hundreds of defence lawyers and experts, including Nobel Prize winners. In 1992, the French were awarded a compensation of US $220 million.

Oil poured from a well into the Gulf of Mexico at a rate of 60,000 tonnes a day. The slick surrounded Rancho Nuevo in Mexico, one of the few nesting sites for Kemp’s Ridley sea turtles. Thousands of baby turtles were airlifted to a clean part of the Gulf of Mexico. This spill has a close affinity to BP’s recent Deepwater Horizon accident (see: ‘A new dead zone in the making’, Down To Earth, June 1-15, 2010).

Exxon Valdez ran aground on Bligh Reef in Alaska. The tanker was travelling outside shipping lanes to avoid ice. It spilt about 7.5 million tonnes of oil, affecting 2,100 km of coastline. Three hundred thousand seabirds were killed.

People living close to the spill area suffer bronchial ailments even today. The ship was repaired. Banned from Alaskan waters, it carries oil from West Asia to Europe under a new name, Sea River Mediterranean. It’s captain John Hazelwood became a teacher at a maritime academy and then a consultant at a New York law firm.