The mustard oil industry is in severe crisis. vibha varshney finds out why 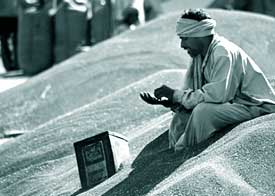 Prem Chand Goyal, proprietor, BR Oil Mills in Bharatpur, Rajasthan is usually quite a phlegmatic character. But any talk of his trade is enough to ruffle his placid exterior. "My unit can crush 1,000 sacks of mustard seeds every day, but it is functioning at only half its capacity," he says. Smaller factories are doing much worse. "The demand for mustard oil has fallen in the last few years. We are just not able to compete with imported edible oil," rues Goyal. More than 50 per cent of India's edible oil requirements come from imports. The technology mission initiated in 1986 by the Union ministry of agriculture did ensure that the country met 97 per cent of its edible oil requirements in 1992-93. But then things took a turn for the worse in 1998.

That year, close on the heels of a government order raising tariffs on edible oil imports, dropsy struck Delhi: 60 people died and around 3,000 fell sick. Mustard oil laced with argemone was blamed for the malady. Sale of loose mustard oil was banned, packaging increased prices, small manufacturers suffered and imports increased. The domestic mustard oil industry suffered in spite of the rise in import tariffs. It therefore smells a conspiracy in the dropsy episode. That the disease had struck in the wake of a World Bank report arguing for the liberalisation of the oil seed sector adds weight to their argument. "Why would manufacturers add poison to their products?" asks Krishan Kumar Agarwal, proprietor, Shree Om Industries -- another mustard oil manufacturing unit in Bharatpur. "In any case, argemone seeds used in traditional medicine are very costly and are not even available easily," he adds. Scientists also rule out accidental contamination because argemone seeds mature much after the mustard crops are harvested. "I have seen thousands of mustard fields but have rarely come across argemone plants there," says Arvind Kumar, director, National Research Centre on Rapeseed-Mustard, Bharatpur.

Conspiracy or not, edible oil imports increased from 2 million tonnes in 1997-98 to 4.5 million tonnes in 1998-99 and by 2002-2003, they were up to 5 million tonnes. As oil importers prospered, fortunes of the mustard farmer fell. The government does have a minimum support price for mustard and the National Agricultural Cooperative Marketing Federation of India (nafed) is enjoined to procure seeds from farmers in times of duress. But nafed rarely steps in and the farmers say they are left to the mercy of the open market. For example, in 2000 the minimum support price for mustard was Rs 1,100 per quintal (100 kilogrammes) but farmers in Rajasthan had to sell the seeds at the open market for Rs 900-950 per quintal.

With the once-ubiquitous mustard oil out of favour, palm oil and soybean oil emerged as replacements, respectively accounting for 38 and 21 per cent of total consumption in 2001-2002. Palm oil makes up 70 per cent of India's edible oil imports. According to a November 2003 report of the United State's Department of Agriculture (usda), 44 per cent palm oil imported into the country is sold loose and 30 per cent is used as blended oil. The major companies blend palm oil with other edible oils. For example, Adani Wilmar Limited, Ahmedabad sells its Fortune Shakti refined oil as a combination of soy and palm oil. One of the few companies that sell unblended palm oil is the Pune-based Parakh Food Limited. It has recently entered into collaboration with the us multinational, Cargill Foods. Palm oil has also become a favourite of food chains such as McDonalds and Pizza Hut, because of its colourless and odourless qualities. More significantly, these qualities makes it amenable for making vanaspati. According to usda, 24 per cent of palm oil imported into India is used to make vanaspati.

All this is much cause to worry. "The use of vegetable oils has compromised the health of Indians," contends H B Singh, executive director, Mustard Research and Promotion Consortium, New Delhi. A study by researchers at the department of medicine, Safdarjung Hospital, New Delhi links increases in heart diseases and diabetes (type 2) to increased consumption of refined vegetable oils. These oils contain more polyunsaturated fatty acid (pufa, the number 6 variety ). Mustard oil, in contrast, is low in pufa and high in monosaturated fatty acid. What's more, pufa found in mustard oils is the omega-3 variety. According to researchers of the College of Pharmacy, South Dakota State University, usa, such pufa reduces chemically-induced cancer. However, according to Singh, "No agency promotes mustard oil". For example, the Union ministry of agriculture passes on the buck to the Union ministry of health and family welfare.


"The least the government can do is to increase the import duty of vegetable oils, so that they don't end up cheaper than indigenous oils," says Agarwal. The current duty on palm oil is 65 per cent of the cost price; there are good chances that even this might go down with the Malaysian government lobbying hard against import duties on palm oil -- of course, it's another matter that the duties can go up to 300 per cent, as per strictures of the World Trade Organization. R S Pandey, project director, Technology Mission on Oilseeds and Pulses (tmop) tries to allay fears: "We have negotiated with the Union ministry of finance for higher import tariffs in the new budget," he says. Agriculture policy expert Devinder Sharma does not place much hope in the tmop, however . "The government seems to be very confused. On the one hand, it has the tmop to promote mustard and on the other, it lowers imports duty on edible oil -- the two cannot go hand in hand."

Meanwhile, mustard oil entrepreneurs such as Goyal and Agarwal have another worry. Tobacco major, itc Limited has thrown its hat into the mustard oil business. The company has set up choupals in villages all over Rajasthan -- and in many other parts of the country -- to buy the mustard crop directly from the farmers instead of them having to take their produce to the grain markets (mandis) . " The farmer can save up to Rs 2,000 per trolley of mustard; they save on labour, travel and commission," says an itc official. This has upset the commission agents and the mustard oil industry. " itc can afford to pay farmers more than local traders. They won't mind losses in the short-run, if it eliminates competition. But after local traders have been outcompeted, itc will procure the mustard seeds at a low price and sell them at a higher price to the oil industry," charges Laxman Prasad, a commission agent at the Bharatpur mandi. itc representatives pooh-pooh such charges and argue that the recent marketing reforms in agriculture have made it easier for the industry to buy seeds from farmers.

If low imports duties and the itc were not enough, there are other big competitors looming. With its small-scale status slated to end in April this year, the mustard oil industry could attract a host of big players including multinationals. According to J S Khan of the Council for Scientific and Industrial Research, "Manufacturers should enter into contracts with farmers, ensure them fair prices and buyback the mustard crop." Others feel we should rethink our import strategy. Kumar contends, "It would be prudent to import seeds -- instead of oil -- so that crushing units are gainfully employed." But the tariffs on seed imports remain more than that on edible oil imports. So, isn't it high time, the industry get its act together?