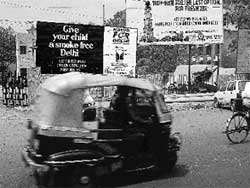 on february 12, Delhi Chief Minister Sahib Singh Verma's phone lines were flooded as citizen's of the city called his office continuously and told him clearly that he could not barter their health for votes. They were responding to a call by the Centre for Science and Environment (cse) to call the chief minister's office and express dissatisfaction over the withdrawal of the ban on old and polluting vehicles.

The chief minister was not available till late evening to comment on the action he plans to take. However, the staff at his office said that the calls had been recorded and would be heard by the minister. The staff at the chief minister's office started banging down the phone on citizens who called later in the day, though earlier they put up their best election behaviour and politely took the calls.

The Delhi government had decided to withdraw the ban on old and polluting commercial vehicles a fortnight before the elections, in order to soothe the ruffled feathers of the Federation of Transport Unions Congress (ftuc). The organisation had warned that if the vehicles were banned, the ruling Bharatiya Janata Party (bjp) would lose 20 lakh votes. ftuc held the entire city to ransom by calling a transport strike on February 11. The strike, which was organised a mere five days before the elections, was aimed at making sure that the government sticks to its promise of issuing fitness certificates after rigorous inspection, instead of banning the vehicles. This promise had been extracted from the government earlier, when ftuc organised a chakka jam on February 6.

Anumita Roychowdhury of cse had written to M S Gill, the chief election commissioner (cec), on that day highlighting the serious lapse on part of the bjp government in confirming with the code of conduct. "We hope that the Election Commission has taken note of the media reports that the decision to withdraw the ban was issued on February 4 in wake of the agitation by the Federa-tion of Transport Unions Congress ...with the Delhites increa-singly falling victim to air pollution-related diseases, the government should take its pollution-control decisions more seriously, particularly in the inte-rest of public health," she had written.

The withdrawal of the ban violated the guidelines issued by the Election Commission of India (ec) on the Model Code of Conduct for Political Parties and candidates this year. This states, "The party in power whether at the Centre or in the state or states concerned, shall ensure that no cause is given for any complaint that it has used its official position for the purposes of its election campaign." However, the ec had refused to take action against the ruling party when contacted by cse. Gill had responded by saying that he did not have the time for such "trivial" matters.

Citizens expressed rage that the health of 9 million citizens of Delhi was being termed "trivial". "Is our health being weighed out with 20 lakh votes and being found less important?" asked Akhil Kishore, a civil engineer who contacted cse after reading about the campaign in the newspaper.

Doctors of the Indian Medical Association and the Delhi Medical Association expressed their disbelief at Gill's cavalier attitude in a "Statement of Concern" sent to the cec on February 13. "Does the health of Delhi's 9 million citizens seem 'trivial' to you? How can you allow a hasty decision such as this one, so obviously motivated by political ambition, to be taken 11 days before the election? Is this not in violation of your very own Model Code of Conduct," they asked. "We strongly urge you to take action today, the last day of campaigning," the statement added.

On the same day, citizens suffering from respiratory diseases wrote to the chief minister to express their concern over the government's disregard for their health. "We, who have signed this statement, are among the 60 lakh people in this city who suffer from respiratory illnesses because we breathe the polluted air that is the creation of the dirty politics that your party plays. Do you know that while you may have lifted the ban on polluting commercial vehicles to pacify 20 lakh people and to get their votes, you have at the same time signed our death warrant?" the people asked Singh.

"Mr Minister, you cannot take air pollution lightly. If your government does not have the strength to stand up to the pressure applied by the transport unions, or to come up with solutions to ensure that their livelihood needs are looked into while our health is kept in mind, then, sir, we assure you that you and your party have lost our vote in future," they warned.

A study by cse released on November 1, 1997, had found that while more than 52,000 people in Indian cities die prematurely because of air pollution, the figure for Delhi alone is an astronomical 10,000. Respiratory diseases are on the rise, particularly among school children. In Delhi, more than 42 per cent of all taxis, 28 per cent of all goods vehicles and 27 per cent of all autorickshaws are at least 15 years old.

While the issue is intricately linked with the livelihood of autorickshaw and taxi drivers, the Delhi government should use fiscal measures, including a tax on road users, to fund the phasing out of old vehicles. At present, people who buy cars worth several lakh pay a ridiculously small amount for the use of the already-scarce road space in the city.

cse had taken up the issue up with the ec after it became apparent that the Delhi government was withdrawing its decision to appease a certain section of the electorate. The cec was requested to intervene immediately to take this matter up with the state government. In a Press statement issued in the last week of January, cse director Anil Agarwal had pointed out that "the imminent election has spirited away the political will to implement the decision".

The bjp government is under pressure to yield to commercial lobbies because of the forthcoming elections, Agarwal said. He pointed out that a notification issued by the Delhi government in October 1997, under section 20 of the Air Act, had stated that no commercial vehicles - including buses, trucks, and taxis - can ply on Delhi's roads after March 1998. This notifi-cation also came with a detailed plan to phase out old commercial vehicles in stages - 15-year-old vehicles by March 1998, 12-year-old by March 1999, 10-year-old by March 2000, and all medium and heavy vehicles more than eight years old by March 2001.

cse is convinced that the state government is dithering over the decision because they are fearing a major backlash from the transport lobby, the January statement had said. Agarwal had argued that if the bjp government gives in to such lobbies at the expense of peoples' health, then all environmental groups and public-spirited citizens should ensure that nobody votes for the party.

The government is likely to do a volte-face based on such benign arguments that not all old vehicles are polluting due to good maintenance and getting annual fitness certificates is good enough to justify their existence, the statement said. This completely ignores the fact that in 15 years, all vehicles outlive the specified life after which the engine needs to be junked. Besides, the inspection regime of the government is so weak that it is unlikely that offending vehicles will get weeded out.

The severity of the economic impact, the statement said, can be mini-mised by providing a one-time rehabilitation package that includes loans on easy terms, a buy-back arrangement or other fiscal incentives. The government can raise funds to finance this package by raising the ridiculously low one-time taxes on scooters and cars. But the government cannot disregard public health, the statement asserted.

The state government should also realise that it is very important to mobilise public opinion to create constituency for difficult decisions, in order to resist lobby pressures. Crores of rupees are being squandered by the Delhi government today to check emissions of vehicles. A more effective campaign would be to inform the public about how much the old and poorly-maintained commercial vehicles pollute. Only politically misguided leaders can ignore the public health issues to pander to the economic interest of a few, cse had said.