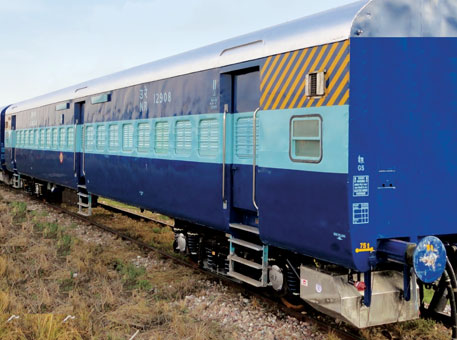 Do not wrinkle up your nose in disgust. Railway tracks littered with human excreta may soon be a thing of the past. On September 1, the Indian Railways proudly flagged off the Uzhavan Express, which is fitted with bio-toilets.

The bio-toilets, which have been developed by the railways and the Defence Research & Development Organisation (DRDO), have a colony of anaerobic bacteria, kept in a container under the lavatories that convert human waste into water and small amounts of gases. The gases are released into the atmosphere and the water is discharged after chlorination on to the track. The railways currently uses flush toilets in trains, in which human waste is dumped directly on the track. This makes the environment unhygienic and railway stations an eyesore, apart from the fact that the faecal matter corrodes the tracks.

Southern Railways officials say that except for the first- and two-tier AC coaches of Uzhavan Express, the remaining 34 coaches have been fitted with bio-toilets. “These toilets aim at zero defecation on the ground,” says Vinay Srivastava, former director-in-charge of the bio-toilet project who is currently working as director, Ministry of Environment and Forests.

“The IR has been trying out various technologies and designs for a long time to avoid corrosion of tracks due to faecal matter,” says Nitin Chowdhary, executive director, Mechanical Engineering (Development), Railway Board. Chowdhury explains that the first effort towards proper disposal of human waste on passenger trains was made in 1975.

“Subsequently, we experimented with technologies using aerobic bacteria, imported from a firm in the US, solid-liquid waste separation, controlled discharge systems. During the course of these developments, the IR held meetings with DRDO to understand how they managed the sanitation of Indian troops deployed at Siachen Glacier. With this meeting started our association with the DRDO that culminated in the development of the bio-toilet,” says Chowdhury.

The first bio-toilet-fitted train, Gwalior-Varanasi Bundelkhand Express, has been running since January 2011. The bio-toilets in the Gwalior express ensure that the undercarriage is clean and without any faecal depositions. The other advantage is that single bacteria recharge works for nearly a year. The anaerobic bacteria used in the green toilets can withstand extreme climates and common disinfectants. They are resistant to normal cleaning solutions used by the railways.

The bacteria used in the bio-toilet have been collected and analysed by DRDO from Antarctica and the efficiency of this system has been tested in extreme climates and conditions. The bacterial inoculum used by the IR for initiating the bio-degradation process is a combination of different groups of bacteria involved in the decomposition of cow dung and human excreta. “Typical composition of biogas is 55–75 per cent methane and 25–50 per cent carbon dioxide. The pH value of the final discharge is near-neutral (approximately 6.5-7.5) in most of the cases; it may vary depending upon the number of passengers using the bio-toilet,” says Indrajit Singh, executive director, Research Designs and Standard Organisations of IR, which is responsible for the maintenance of bio-toilets. According to DRDO, microbial inoculum contains anaerobic bacteria belonging to four different clusters namely hydrolytic, acidogenic, acetogenic and methanogenic groups.

Chowdhury says the cost of a single module of bio-toilet is between Rs 75,000 and Rs 80,000. He says retro-fitting bio-toilets is a challenge and can be expensive. “The welding required to fix these tanks and brackets is of exacting standards. The old parts on which this assembly has to be welded also need to be removed if they are corroded, which is a labour-intensive job and can be done only in specialised workshops.”

“Hence the cost of retrofitment goes up substantially depending on the quantum of work involved and quantity of parts needing removal and replacement. However, the decision to adopt bio-toilets is not cost based, but to make our stations and tracks clean,” says he. The bio-toilet tanks or digesters are made of stainless steel and have a dimension of 1,150 mm x 720 mm x 540 mm. The weight of empty tank is 110 kg and that of full tank is 410 kg.

The digester tank has multiple chambers that enable efficient biological degradation by providing maximum pathway to anaerobic bacteria. The digester has a provision for bacteria colonisation to cope with sudden washouts by accidental pouring of large amounts of water in the toilet. It also takes care of the occasional adverse conditions created by the accidental use of excessive detergents and antiseptics. DRDO thinks the design is simple and the system, once installed, can be in operation for years.

The maintenance of bio-toilets includes visual inspection of the toilets, clearing of the toilet chute in case of chocking and charging of chlorine tablets in the chlorinator. The bio-toilets, which are welded to the passenger coaches, have an inlet for human excreta and an outlet for biogas.

According to Srivastava, the inspections and field reports have confirmed that there is no odour due to faecal matter as the design prevents odour if any, from rising up. However, the odour of urine may remain if passengers do not flush the toilets after urination.

Railways officials say that the success of the model rests on the cooperation of passengers, who are expected not to use the toilet pan as a garbage bin. Bio-toilets get easily clogged by plastic bottles, tea cups, cloths, sanitary napkin, nappies, plastic bags and gutkha pouches.

Srivastava says that the IR is working on designs for flushing to keep the area around the toilet seat clean. Apart from this, the toilets are frequently cleaned by air-water jets at Clean Train Stations, he says.

Chowdhury says currently over 4,000 bio-toilets are in use in trains. With a view to completely switch over to environment-friendly toilets by 2021-22, all new coaches are being fitted with either bio-toilet systems or brackets which can hold bio-toilets. Bio-toilets had faced a lot of criticism during the trial phase on the system’s inability to treat the waste fast enough, but railway officials say that the problem has been fixed. They say bio-toilets, in the long-run, will be cleaner and economical.