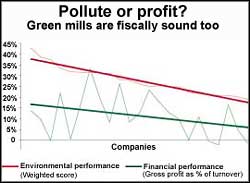 The best performers environmentally are financially sound too. Take, for instance, J K Papers, the mill with the highest grp score. The company enjoys a profit of 14 per cent (gross profit as percentage of turnover).

On the other hand, companies like Amrit Papers, Nath Pulp and Paper Mills and Rama Newsprint, which are in the bottom of the rating, are also running in losses. It's time they realised environmental performance goes hand-in-hand

The more the variety of products a pulp and paper mill manufactures, the higher the pollution it generates. At least, this is what happens in India where the level of technology is very poor. Most of the Indian mills are small and they change their product type depending on the demand in the local market. However, the small-size of the mill does not make it profitable to switch to a technology which is best suited to make the required type of paper. Ill-suited and obsolete technology adds to the pollution load.

The problem of product diversity is not just limited to production technology. Most of the Indian mills do not have adequate technology to recycle their wastes. Effluent treatment plants ( etp s) are capable of handling discharges and emissions emerging from single-product paper plants only. With an increase in the types of paper produced, the efficiency of the etp s plummets.

Production of single product gives competitors an edge in terms of optimisation of processes. Global giant International Papers and Indonesian major Asia Pulp and Paper, which is the parent company of Sinar Mas-India, are both producing single paper. Besides, their production is not dependent on the vagaries of a local market, but on the global market, where there is comparatively less variation in the demand for a product-type. Besides, their large size gives them the opportunity to adopt cleaner technology, which also includes a factor of safety for product variations.

But, in India, small, unregulated mills usually cut into the pockets of bigger mills, forcing the latter to move away from limited number of products to a variety of products.

In search of fibre...
... mills have now reached the rich bamboo reserves in the country's Northeast

The paper industry has literally come a long way with respect to raw material sourcing, specifically fibre. When paper mills were first set up they were able to procure most of their wood from forests in the vicinity. However, over a period of time the forests were depleted with no sustainable forestry practices being adopted. This forced mills to extend their search for wood to neighbouring states. As these forests have also met with a similar fate, paper units are now moving to the veritable treasure trove in the country's Northeast.

For instance, Andhra Pradesh Paper Mills Limited ( appml) located in the East Godavari district. Almost 80 per cent of the total raw material comprises hardwood, 19 per cent bamboo and the rest wastepaper and market pulp. Although appml has been able to meet most of its hardwood demand from its farm forestry programmes and open market, it still depends on natural forests for bamboo. The unit's bamboo consumption varies between 15-20 per cent of the total requirement. Till recently, appml procured its bamboo needs from Andhra Pradesh government forests. After protests by local ngo s, the government was forced to withdraw the allotment in 1998. This has forced the mill to turn to the neighbouring states for bamboo, or even the distant Northeast - the only region in India which still has bamboo reserves (see map: Bamboo travails ). Going by appml 's and other mills appetite for fibre, soon those reserves too might not be worth talking about.

Dubious dealings
neeri is a consultant of opm . It also acts as a regulatory body

Nagpur-based National Environmental Engineering Research Institute ( neeri ) has been a consultant to Orient Paper Mills ( opm ). The mill is located on the western bank of the river Sone at Amlai in Madhya Pradesh. In 1969, the mill approached neeri for the first time to conduct research on effluent treatment plants ( etp s). Since then, neeri has been directly involved in the planning and implementation of etp s (installation and modernisation), the most recent being the implementation of the High Rate Transpiration System ( hrts ). hrts entails the use of liquid effluents for irrigation purposes.

A public interest petition was filed against the mill on environmental grounds. In response, the Supreme Court asked neeri to submit a report on the efficiency of the ETP and the pollution generated by the mill. Later, on the basis of this report, the case was dismissed.

This is a clear case of conflict of interest where neeri is acting both as a consultant to the company as well as a regulatory body. Hence, doubts about an impartial opinion naturally arise.

Meanwhile, the local community and the media have been extremely critical of the mill. One of the most serious allegations is that the mill builds an earthen dam across the river Sone to block water for most part of the year, except for three months during the monsoons, which leaves people downstream facing an acute water shortage. A little water seeps through the earthen dam, but this is not enough. Way back in 1966, a five-member committee of the state legislature concluded that the pollution of the Sone was caused by opm. There are several allegations that the mill is polluting the Sone. A media report also says, apart from the massive discharge of wastewater from opm , Hukumchand Mill, a caustic and chlorine plant which is operating just to supply chemicals to opm , finishes off whatever life is left in the river.

It is possible to estimate the amount of pollution generated by a pulp and paper mill, but whether the pollution gene-rated by the mill is within the carrying capacity of the local environment is not easy to quantify as the estimation is based on various subjective parameters. Here, community perception is the only indicator to ascertain the impact of the mill on the local environment.

At the secondary data collection stage of grp , the perception of the local communities were also taken into account to rate the mills. The quality of those perceptions can be divided into the following three categories:

l Where there is only one mill in the area: In this case, public perception can be fairly accurate. If the pollution load surpasses the carrying capacity, the number of complaints against the mill will increase. People's anger against South India Viscose ( siv ) Ltd in Coimbatore, Tamil Nadu, comes in this category. A local community group, unhappy with the pollution of the river Bhavani, filed a petition against the mill in the Madras High Court in 1995. The court issued a closure order to siv in 1997, but thereafter the mill got its act together. Now the mill's pulp unit has been allowed to operate on a trial basis.

Local communities living around West Coast Paper Mills ( wcpm ) Ltd in Karnataka, Central Pulp Mills in Gujarat and Chaudwar unit of Ballarpur Industries Limited in Orissa also voiced their grievances against the mills concerned. In fact, cse received a complaint against wcpm from Hemant Naik of Parisara Samrakshana, a local activist group, complaining about the pollution of the river Kali. In his letter, Naik said, "The mill is discharging high amounts of untreated effluents into the river."

l Where the mill is located in an industrial belt: In such a situation, the local community is not able to peg the blame on a single industrial plant. For example, people living around Pudumjee Paper and Pulp Mill ( pppm ) in Maharashtra talked about pollution of the river Pawna and air pollution, but were hesitant to pinpoint the source, u nsure of whether the culprit was pppm or a nearby sugar factory.

l Where social issues dominate environmental concerns: When social issues like unemployment prevail over environmental problems, the local communities' perceptions are shaped by their own needs. Their viewpoint on Sinar Mas-India appears to fall in this category. People of the surrounding area showed their unhappiness about the mill's operation. But environmental problems aside, it was noticed that the concerns centred around unemployment and the fact that the mill had hired outsiders in place of the local people. The mill itself is not a holy cow. Though it has started interacting with the local people, overall it has been reluctant to include them as stakeholders.