On the trail of the hungry herd

A stray herd of elephants in West Bengal was hounded by villagers and government officials, who feared destruction of their crop. The incident brought to the fore the tension between the animals and the villagers.

On the trail of the hungry herd 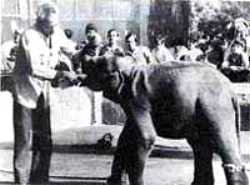 DURING the last few days of 1993, about 60 pachyderms were chased and tormented over 400 km in southwestern West Bengal. The episode dramatically highlighted the increasing tension between human being and beast in various parts of the state.

The elephant herd migrates from Dalma Reserve Forest in Bihar to Jaypur forest in Bankura every year (See map). After about two months, the herd returns to Dalma. For residents of several villages in Bankura district, encounters with elephants have been a routine affair for almost a decade now. Says Kishore Sahu of Patpal, "In our area, the fight between us and the elephants may soon become a battle of survival." Since 1988, at least 55 people have been killed by elephants in Bankura and Medinipur districts.

However, the migratory route varies to some extent every year. Says a local forester, "All we can do is try and ensure that the elephants stay within a broad corridor." Foresters try to keep the herd on course by a sound and light show, using drums, tin cans, crackers and flaming torches.

The villagers of Bankura have developed other ways of regulating the elephant traffic. Says Krishna Medda of Patpal, "The forest officials always come too late -- when the beasts are already in our homes and fields." So, as soon as the elephants are sighted, the villagers gather with stones and rocks. They also have indigenous weapons such as the hula -- a 2-metre iron rod with a sharp tip at one end. The pointed end is heated until it is red hot and used to jab the elephants.

However, such tactics do not stop the herd from straying. On the evening of December 28, 1993, the pachyderms travelling towards Jaypur made a diversion and headed towards Hugli district. They reached Senai village the next morning. The initial reaction of the villagers was one of curiosity. Recalls Sriraj Panda, a resident of the village, "In the early hours of the morning, we just gathered around the herd, attracted by its shrill trumpeting. A couple of us started throwing stones and the crowd would cheer when a hit was scored."

However, the villagers soon realised the mammoth animals would be a threat to their potato and mustard crop and became determined to chase the elephants away. They moved closer to the animals and one of them was crushed to death when he ventured too close. For some time, the crowd was stunned but within a couple of hours, it worked itself into a frenzy and started stoning the herd with renewed vigour. When the police arrived that afternoon, the elephants had already been forced out of the village's fields.

As the elephants lumbered through fields of other villages, rumours about the destruction wrought by the herd spread quickly. Officials of Arambagh subdivision, under which Senai falls, alleged the elephants had destroyed 35 houses in Senai, although the villagers deny this.

The main concern of the Hugli district administration was to quickly drive the herd out of the district. The officials planned to push the herd north towards Babla forest in Barddhaman district. The plan succeeded only partially. The herd entered Burdwan late on 29th night, but by the next afternoon, after rampaging around, it was pushed back into Hugli.


When the herd re-entered Hugli, an angry exchange of messages broke out between the officials of the two districts. Said Hugli district magistrate A P Singh, "Barddhaman has a forest as well as a long river bed. The (Barddhaman) district administration had no justification in allowing the herd to be pushed back into Hugli."

As the officials bickered, utter confusion prevailed among state forest officials. This was compounded by a lack of information that hindered attempts to control the movement of the herd. When a team of 52 mahouts was brought from Bankura on December 31 morning to turn the herd back to Jaypur, they were deployed at Chandanagar, from where the elephants had been chased out five hours earlier. The mahouts had to chase the herd on foot.

Meanwhile, the humans and the beasts continued to hurt each other. The elephants trampled to death two people near Mogra and left a trail of destruction in their wake. On their part, the villagers kept up the assault on the animals. The calves that lagged behind the herd bore the brunt of the villagers' attacks. Dadpur villagers captured a three-month-old calf, whose life was saved only because village elders intervened.

By the morning of the 31st, the herd was close to Chinsuriah, near the banks of the Hugli river. It was only at this stage that the state government officials felt the situation needed immediate review. Said state home secretary Manish Gupta, "There was a danger of the animals crossing the river and coming to Calcutta."

Reports that chief minister Jyoti Basu had asked to be constantly updated on the situation induced a sense of urgency in the forest department and brought new players into the drama. Among them was Prabir Sengupta, minister of state for small-scale industries and a prominent politician of Hugli district.

Sengupta created a three-km roadblock of lorries on the Grand Trunk Road. Police personnel were deployed at Mogra with abundant supply of crackers. Sengupta hounded the herd to ensure it was kept moving.

The harassed herd was pushed continuously and re-entered Barddhaman district in the wee hours of January 1. The herd found no respite and some members had been separated, but the state authorities were determined not to allow the herd to reunite. By the next afternoon, the herd had reached Jaypur forest.

The authorities feel they have successfully tackled the problem of the runaway herd. However, it blames the Bihar government for failing to check the entry of the herd into West Bengal. "For years we have asked the Bihar government to provide land along the border with Bankura and Medinipur districts to set up an electrified fence to restrict the movement of the elephants. So far, we have been greeted by an absolutely lackadaisical response," said West Bengal's principal conservator of forests, B K Bardhan. The state's forest department had also sought funds from the Union government to set up a sanctuary for elephants in Medinipur district.

A positive response is still awaited. Bihar officials say the proposed fencing would run through reserve forests, requiring the intervention of the ministry of environment and forests. Ministry officials refused to comment on the matter.

The incident of the stray herd revealed that the migration of the Dalma herd has not been studied. In recent years, Dalma has seen much deforestation because of the timber requirements for industrial and residential use in nearby Jamshedpur. The foresters of Bihar and West Bengal say feed shortage caused by deforestation is what forces the elephants out of the area. Says Shantanu Guha of the Zoological Society of India, "It is obvious that the Dalma herd is working out a new corridor to take it to better feeding grounds in Jaypur. But it will be a long time before the route is finalised."


However, Guha and other experts like R Sukumar of the Bangalore-based Centre for Ecological Sciences emphasise feed shortage does not completely explain elephant migrations. Says Guha, "We still have to understand why elephants stray into cultivated fields." According to him, this may be "more because they have come to find crops more tasty and nutritious than jungle grasses and leaves". Sukumar adds, "This problem has been noticed in the south, where elephants routinely raid coffee estates and sugarcane and paddy fields despite ample supply of grass and leaves in the forests."

Going by this argument, the plans of the West Bengal forest officials to create artificial corridors and sanctuaries to restrict the movements of the Dalma herd may come to nought.