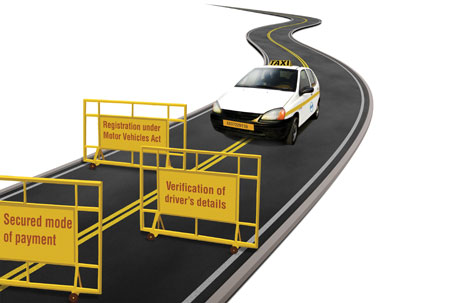 AMERICAN TAXI service company Uber’s dream ride in India came to a halt following rape accusation by a passenger in Delhi against its driver on December 6. The incident highlighted how Uber failed to do background checks on its drivers, and how it operated purely as a virtual entity in the country, skirting laws that govern taxi services and ensure safety of passengers. On December 8, the Centre issued a diktat banning Uber and other taxi services, which operate through cutting-edge mobile or online applications, until they get themselves registered with the government under the Motor Vehicles Act of 1988.

This is not the first time an app-based taxi service has been pulled up. Since these start-ups have come into being in the past four to five years, they have been criticised in the US, UK, Brazil and Belgium for failing to abide by local rules and for lack of safety provisions. Yet, they have been a favourite among the tech-savvy population worldwide, who find the ride-sharing service of these start-ups as another mode of public transport. After downloading the company’s app, customers can book a taxi of their choice by using GPS location data tracked by their iPhones or Android phones and connect with other passengers, registered with the app, who are travelling in the same direction. This helps passengers bring down the cost of travel.

Before the tragic incident in Delhi, Archit Patel, a young filmmaker from Mumbai, experienced a joyride with Uber during his visit to the city. Premier radio taxi operators charge Rs 69 as starting fare; that of Delhi Taxi Cabs Association (black and yellow cabs) is Rs 55. Patel travelled from the Indira Gandhi International Airport to South Extension at Rs 40 as starting fare. Later that week, he attended the screening of his favourite director in a Gurgaon theatre. Using the app, he found two other people going towards Gurgaon from his location. He sent them request, which displayed his profile along with the fare and details of the driver. One of the passengers accepted his request. The fare turned out to be much cheaper.

The concept has also been quite a hit among drivers and taxi owners. “It is easy to register with Uber and payments are made on time,” says Rakesh Dhingra, who joined Uber as a driver in November. So far, 15,000 drivers have joined Uber-India that provides services in 10 metropolitan cities. Bhavik Rathod, General Manager of Uber-India, says the company runs an attractive vehicle finance scheme which allows drivers to purchase cars along with iPhones that provide GPS backup and access to the app by which drivers get paid. 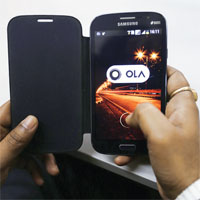 Uber has a homegrown rival, Ola cabs, which operates in Mumbai and Bengaluru. To expand their customer base and compete with auto-rickshaws, Uber and Ola have recently launched mini-car versions that will provide services at 25-30 per cent cheaper rate than traditional taxis, such as radio cabs.

Small wonder that since 2013, when Uber launched its services in India, it has generated US $1 billion through bookings, according to a survey by Thomson Reuters. The company counts India as its second largest market after the US. In such a scenario, the sudden ban on the companies has evoked mixed response.

Law yet to catch up

An analysis by Down To Earth shows that even if these app-based taxi services comply with the diktat, they might still be above the ambit of the law, which has failed to keep up with technological advances and emerging business models. “There is considerable ambiguity about the applicability of the Motor Vehicles Act, 1988, on app-based taxi services,” says Rahul Bajaj, a transport expert and lawyer in Mumbai. For one, Bajaj explains, according to the Act, operators must possess a fleet of at least 500 taxis and establish a control room for round-the-clock radio communication with their taxis plying on the road. In addition, the operator must have enough parking space and necessary infrastructure for running the cabs. But Uber does not own or manage any cars. Since the Act does not have any provision to regulate taxi aggregators, “it is difficult to clearly delineate Uber’s functions and rights under the existing legal framework,” he adds.

Transaction of payment also remains a huge concern. The customers need to submit their credit card or debit card details while installing the app on their mobile. This enables it to offer a cashless ride and deduct the fare from the customer’s account. In August, Radio Taxi Operators’ Association approached the Reserve Bank of India (RBI) and pointed out that Uber is skirting RBI’s mandatory credit card security norms. In case of card-not-present transaction, which is the case in most online or in-app payments, RBI requires customers to key in a verification code sent to him or her via text message or email. They pointed out that Uber was also routing its payments through its Dutch subsidiary, Uber BV, and used the same subsidiary to pay its drivers in dollars. After being pulled up by RBI, Uber has forged partnership with an Indian e-commerce service, Paytm. Under the new set-up customers have to create a virtual wallet with Paytm and put money in it using a debit or credit card. After every ride, Uber will deduct the fare from the wallet. Uber and Paytm are yet to find a way to deal with overdrafts.

Complaints against Uber, however, continue to pour in. A scrutiny of its Facebook page shows there have been hundreds of cases in which the company, despite promising free first ride, has deducted the fare using their credit card or Paytm wallet details. Uber collects sensitive financial information. Bajaj says it has to be ensured that its privacy policy and security practices are in accordance with Information Technology (Reasonable Security Practices and Procedures and Sensitive Personal Data or Information) Rules, 2011. Besides, there is no legal contract between the driver and the company. How can this be safe for the passenger? asks Kunal Lalani, president of Radio Taxi Operators’ Association.

Transport authorities in other countries have begun strengthening laws to regulate the new business model. In Washington DC, local bodies have proposed amendments to the Taxi Act, which restricts Uber’s ability to charge competitive prices. In Los Angeles, Uber and two other app-based taxi services, Lyft and Sidecar, were issued cease-and-desist letters from transport authorities to shut their businesses, following which Uber struck a deal with the transport authorities.

App-based taxi services might go a long way to decongest roads in Indian cities by offering shared ridership. The government should consider amendments in the laws so that the customer is not taken for a ride.