Since the 1950s and 60s, India's efforts to tap wind energy have seen many ups and downs. The mid-1990s saw a boom, with Tamil Nadu taking the lead in wind power generation. But nothing has moved since 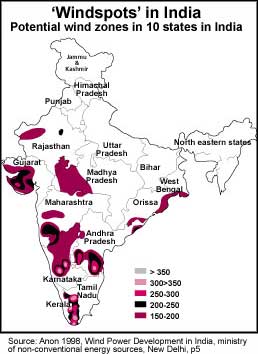 In 1891, an innovative teacher called Poul la Cour of Denmark discovered that the traditional clapboard-sailed windmill, used to grind, corn could produce electricity, too. For many years, his discovery helped in lighting his high school and village houses.

During both the world wars, dozens of crude wind turbines based on la Cour's design were used to keep power flowing to rural areas hit by fuel blockades. But when coal and oil began to flow again, interest flagged. Nobody thought much about the environment.

Finally it took the West Asian oil crisis of the 1970s to show that wind turbines had a potential far beyond creating self-sufficiency in power generation. Rising prices and uncertain supplies exposed the vulnerability of fossil fuels. At the same time, even before the Chernobyl radioactive leak, nuclear energy was beginning to lose its attraction.

Wind power offered an alternative which would score over all the existing sources of energy. The Danes were quick to refine the design of the windmills. Today, windmills of Don Quixotic fame have given way to tall, sleek, tapering structures topped by large fibreglass blades.

Present day wind technology can be broadly divided into three types. First, wind pumps which use mechanical energy derived from wind energy and, second, wind energy generators ( weg s) which convert wind energy into electricity with the help of turbo generators; and, lastly, wind-electric battery chargers which produce electricity and store it in batteries. In India, a systematic approach to harness wind energy was made by the Council of Scientific and Industrial Research at the National Aeronautical Laboratory ( nal ), Bangalore, mainly in the area of water pumping and wind mills, during the early 1960s. The focus was on preparation of a wind velocity map of India, and to import, adapt, test and develop water-pumping windmills.

The scientists also tested two imported wind-electric battery chargers. nal set up a wind power equipment test laboratory in 1962 at Muppandal in southern Tamil Nadu. However, the work slowed down after 1966, when the first nal wind power programme was abandoned amid hopes of cheap electricity generated by a number of mega-hydel projects.

Interest in renewable energy sources was rekindled only during the oil crisis in the 1970s. The National Council of Science and Technology set up an expert committee on wind power in 1972. In the second phase of development, the department of science and technology ( dst ), New Delhi, took the initiative for technology development. Finally, in 1982, the department of non-conventional energy sources ( dnes ) took charge of wind energy development. The dnes was converted into a full-fledged ministry, the ministry of non-conventional energy , in 1992.

During the Sixth and Seventh five-year plans, the stress was on development of wind pumps. By 1997, about 3,000 of them had been installed all over the country. In addition, about 120 wind-electric battery chargers had been imported, tested and installed. By mid-1980s, the focus shifted to weg s, set up under government demonstration projects.

Thereafter, in 1993, the government opened the wind energy sector to private enterprise. Lured by the incentives, wind farms were set up by major industrial houses, including Madras Cement Limited and Dalmias, all over the country. With weg s requiring huge investment (Rs 4.25 crore per mw of installed capacity), small players got squeezed out. There was a virtual boom in the wind energy sector. But, after 1997, when many incentives were withdrawn, the growth rate of weg installations came down drastically.

"In 1997, the government made some amendments in the incentive package. Since then, the investment rate has shown a declining trend," says Kamalanathan. However, he says, the slump is temporary. "In the long run, we will back only those producers who are committed to wind energy development."


In India, the use of windmills dates back to 1879. Endowed with an extensive coastal tract and several windy regions along the coast as well as within the mainland, India's wind power generation potential is considerable.

The most prominent feature of the wind climatology in India is the monsoon circulation. Winds in India are influenced by the strong southwest summer monsoon, which starts in May-June, when cool, humid air moves towards the land and the weaker northeast winter monsoon, which starts in October, when cool, dry air moves towards the oceans. During the period March to August, the winds are uniformly stronger over the whole of the Indian coast. Wind speeds from November to March are relatively weaker, though stronger during a part of this period on the Tamil Nadu coastline.

Though there is no dearth of windy sites in India, the country has so far harnessed only a little over 5 per cent of the total wind energy potential of 1025 mw. With 725 mw of energy generation capacity, Tamil Nadu has the lion's share in the wind energy sector, followed by Gujarat and Andhra Pradesh, but the number of installations are one-fourth of that in Tamil Nadu. The other wind power generating states are Karnataka, Kerala, Madhya Pradesh, Maharashtra and Orissa but their installed capacity is far short of their gross potential (see table: Latent energy ).