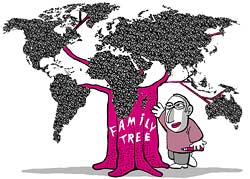 As we peek into our past, the number of our ancestors seems to double in every generation. For every human being has two parents, four grandparents, eight great-grandparents, 16 great great grandparents and so on. By this yardstick, the number of ancestors that each of us had about 50 generations back, or around 1003, must have been two multiplied by itself 50 times. This works out to more than a million billion! But, the population of the Earth today is something like six billion. If we repeat the same calculation for each of the six billion human beings, the population of the Earth in 1003 ad should have been six billion million billion. Clearly something is terribly amiss, because it is an established fact that there were far fewer people alive at any time in the past than there are today.
Our mistake is not difficult to see. We were wrong in assuming that everyone on Earth has different sets of parents, grandparents, etc. Brothers and sisters share the same parents and cousins share grandparents (or at least a set of grandparents). We overlooked this, and counted the same people more than once. In order to do the counting correctly, in each generation we must club together those who have the same parents. On doing so, we find that the number of human beings on Earth was indeed lower in the past than it is at present. It therefore follows that the human population has been growing through its history.

While carrying out this procedure, we stumble upon an extraordinary finding. I will illustrate this with an example. We begin by assuming that the human population has been doubling once about every 100 years. Strictly speaking, this is not true: the rate of growth was much slower in the distant past and is significantly faster today. We are using this premise only as a rough estimate. By assuming a doubling of numbers every 100 years, we find that the Earth had three billion people 100 years ago, 1.5 billion people 200 years ago, 750 million people 300 years ago, and so on. If we go all the way back to the year 1000 bc, the human population works out to about six and those six would have been the ancestors of those alive today. This is absurd. We know for certain that there were far more people on the planet in 1000 bc. In fact, if we go back further into the past we are down to two persons. One of them would have to be a man and the other a woman. The logical implication of this is that everyone alive on earth today is a descendant of that man and woman.

In this case too, the origin of the mistake is easy to trace. As we count back into the past, we have taken it for granted that everyone who is alive in one generation must be the ancestor of someone in the next generation. But many people live and die without having children. Also entire lineages die out. Such persons do contribute to human population in their time, but their impact is not felt in the long run because they do not leave behind any descendants. In our method of counting they must remain faceless. It must be kept in mind that our aim is not to calculate the population of the Earth in the past but that of our ancestors.

In this regard, the figure of six points to something noteworthy. We have concluded so far that if we go back to about 1000 bc, all humans of the current generation can trace their ancestry back to the same small number of people. If the assumption that we made in the deduction is dropped and the correct calculation carried out, the result is more impressive. In order to do so we need to take into account a couple of facts. Firstly, many people left behind no descendants. And secondly, some had unusually large numbers of descendants. We therefore find that our last common ancestors belong to a period that dates back to less than 3000 years. We are all distant cousins, literally.

Vidyanand Nanjundiah is professor in the department of molecular reproduction, development and genetics, Indian Institute of Sciences, Bangalore, Karnataka