One dollar, one language, one world

Ram Chandra Biswas rode 627,500 km on a humble bicycle and witnessed the world change, warmth giving way to suspicion. Sayantan Bera catches up with him in Hooghly

One dollar, one language, one world 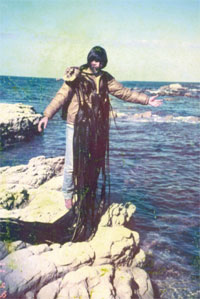 Sometime in the late 1980s a lanky man from Hooghly district in West Bengal was fast asleep on a hammock deep inside the Amazon forest. He had been crossing over to Peru from Brazil, a 15-day journey on a ship. While the ship was being repaired, he walked with fellow travellers to meet the Amazonia tribes. Tired after a long walk, the group laid hammocks under a giant tree, a little distance away from the tribal village. Ram Chandra Biswas, in his mid-thirties, woke up next morning and found himself wrapped by two boa constrictors, heavy bodied snakes known to coil around and constrict their prey.

“I woke up terrified and knew they could crush my bones to bits. I waited patiently,” Ram tells me on a drizzly afternoon at his home in the small town of Uttarpara. A few hours later they uncoiled and left Ram to live and continue his journey. Before I could adjust myself to this horror story, he adds with a smile that human warmth attracted the boas to him. They didn’t mean harm!

Few years later when Ram was travelling on his India-made BSA cycle through El Salvador he was picked by the guerrilla forces. They took him for an American spy. A smattering of Spanish could not convince them that he was on a world tour. Ram was given a preview of his impending death: another captive was brought whose throat was slit in swift strokes and his tongue stretched out. As a last wish before death, Ram asked for an audience with the captain. “I hoped the captain would be more educated and managed to convince him that I was not an American spy. He offered me food and cried after I told him the story of my travels.”

Till the April of 1982 Ram Chandra Biswas was a helping hand at a post office in Uttarpara by the banks of the Ganga, an hour’s journey from Kolkata. He moonlighted as a gym trainer in a club and learnt magic and jugglery, skills that proved to be indispensable to his travels. At 28 he cycled to Delhi with a friend to seek the help of the then prime minister Indira Gandhi on their grand plans of a world tour. “Gandhi cautioned us never to beg for money and portray India in a poor light. We started with a dollar in our pocket and a flight ticket to Nairobi. The plan was to begin with Africa as it would be the most challenging terrain.” Thus started a journey that spanned 627,500 km, 157 countries and 29 riveting years.

Language has never been a barrier, more so at the homes of the poor than the rich. “I have never received more hospitality than in Africa. In a poor country you will find humanity hospitality, love, peace .... In a rich country you’ll find anger, jealousy, fear and selfishness,” he says, struggling with his English. This is one of his nuggets of wisdom he has repeated time and again. “It is more important to respect the culture of the people you are visiting. I have gone hunting with the Masai, have drunk the warm buffalo blood they offered me. I ate everything I was offered except lions and tigers. If you ask me why? No one offered me,” he bursts out laughing. On his return from tribal escapades, he would turn a pure vegetarian with ease, to please his Gujarati and Marwari hosts, traders in port towns of Africa.

While in Africa, Ram’s companion Somnath Mukherjee decided to stay back in Guinea Bissau for a month. Somnath never came back to Senegal where they were supposed to meet. The loss of a friend did not stop Ram from continuing his journey. I get a sense of his wanderlust while taking his photograph in a room spilling with memorabilia—countless certificates from police chiefs and embassies, honorary medals from the Olympic and Nobel Peace Prize committees and newspaper cuttings. While looking at a photo on the display of my camera that caught his wrinkles and dark patches under his eyes Ram becomes pensive. “Look what these two years at home have done to me.” At 60 he wants to set foot on the countries he is yet to visit but is held back by an ailing 80-year-old mother. 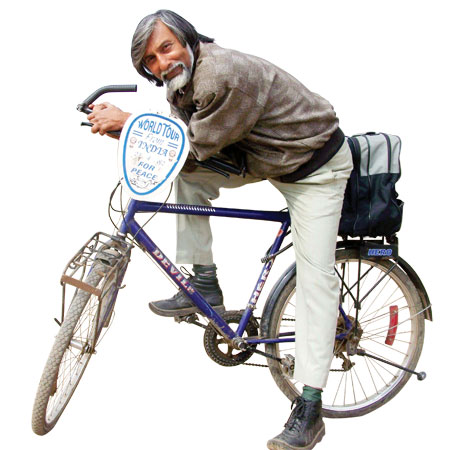 Africa keeps coming back while he speaks of his journey. While in a village Ram would perform juggling and magic shows in return for food and a place to stay. “I got a lot of respect and was even feared to some extent in villages. That’s because black magic is popular in Africa.” In cities like Mombasa, where Bollywood superstar Amitabh Bachchan is well known, people would joke with Ram and say, “Here comes Amitabh Bachchan,” referring to his tall and lanky figure topped with a hairstyle that matched the actor’s. Ram has visited the pygmies in Congo and the Bushmen in Botswana. He particularly remembers how entwined the tribes are to the forest. When I tell him, that the Bushmen are no longer allowed to hunt inside Kalahari reserve, he is surprised and asks, “How will they survive then?”

At the turn of the century Ram was the first Indian to set foot on Spitsbergen, a frozen territory in the Arctic Ocean known for its midnight sun. He was surprised to find coal mining by Russia at such a remote corner of the earth. At Yellowknife in Canada, known for its gold and diamond mines, Ram vividly remembers the spectacular display of light on the high altitude sky, known as aurora borealis. “It cleanses your soul from within,” he tells. A certificate from Raymond the Raven, the business association of Yellowknife, reads, “This is to certify that Ram Chandra Biswas has been to Yellowknife, the most modern frontier city in Canada and has become a blood brother of Raymond the Raven.” The certificate, which has a splattering of red colour across it, jokingly adds in small letters, “Sample of Raymond’s blood is included.”

“Did the world change in the three decades you were travelling?” I ask. “I saw the arctic ice melting, the forests of Amazon chopped mercilessly ... all for human greed,” Ram pauses and then continues, “it is a dreadful sight to see a kilometre-long chunks of ice floating in Antarctica. In the Arctic I saw the exploration bases but now drilling for oil and gas will destroy it.”

“The world is a different place after 9/11. There is just too much suspicion. Getting a visa is difficult. You can no longer travel freely without being asked questions.” Ram says, stroking his beard. But his spirit is indomitable. He recites the names of all the 157 countries he has travelled while I record it on camera. I can barely see him pausing for a breath. It is like a holy chant to him. He ends it with his own translation of Tagore’s words: “Whole over the world you have a house, when you found out, you can find it.”