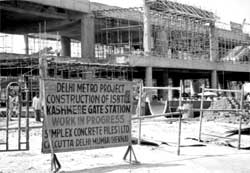 DELHI'S ambitious metro rail system is losing track. The choice of gauge - broad or standard - has snowballed into a major controversy. The players: Delhi government and the Delhi Metro Rail Corporation (DMRC) on one side pushing for standard gauge and the Union ministry of railways, which wants status quo, broad gauge. For those pursuing standard gauge, it is an initiative to keep pace with the international trend (over 80 per cent of metros worldwide run on standard), but the railways ministry cites technological difficulties and wants broad gauge, which is the uni-gauge in India. On August 4, 2001, the Union government has decided in favour of broad gauge. But Delhi chief minister, Shiela Dikshit, has written to the prime minister to reconsider the decision.
Launched with much fanfare in 1996, the Rs 8,150 crore-Mass Rapid Transport System, as it is called, was meant to ease Delhi's transport woes and also control the air pollution levels from an increasing vehiclular fleet. It was supposed to usher in state of the art metro systems into the country and also serve as a model for other cities. Though construction is in progress, the choice of track gauge has plagued the project.

Track gauge is the distance between the rails; 1.435 metres is 'standard gauge'. It is widely used in Europe and North America and has been accepted by the International Union of Railways as a standard. Anything beyond this is considered broad. Broad gauge size varies from country to country - in India, it is 1.676 metres.

Differences over the choice of gauge have led to a bitter fight between DMRC and railway board. Since India does not have the state of the art technology for metro systems, it has to import it. "We want standard gauge as all the advanced metros in the world run on this gauge," says a senior official of DMRC. Even in countries such as Spain and Brazil - which have some of the older metros running on broader gauges - the newer metros are now coming up only on standard gauge. "Since research and development is focused only on standard gauge, it is easy to import them," says O P Jain, former director-general of Research Design and Standards Organisation, Lucknow.

"Most rolling stock (coaches and bogies) all over the world is manufactured to standard gauge specifications," says Luis Ferreira, professor at the School of Civil Engineering, Queensland University of Technology, Australia. "Most systems stick with standard gauge because equipment and civil engineering techniques are widely available," says Ralph Harrington of the Institute of Railway Studies, University of York, UK. "By going for standard gauge, one can virtually buy the latest technology, rolling stock and track components from anywhere in the standardised world market," says the DMRC official. "Standard gauge is cheaper - both in the short and long run. The extra few centimeters in width (for broad gauge) would not offer offsetting advantages," says Tom Judge, editor of Railway Track and Structures, a US-based magazine.
What is worrying is the issue of upgradation of Delhi metro at later stages. "Initial adoption of technology for any gauge may be easy, but subsequent upgradation to keep pace with advanced technologies may prove difficult," says an expert from Rail India Technical and Economic Services (RITES), New Delhi. "By going for broad gauge, all future developments in technology for metro systems will have to be adapted to our requirements," rues the DMRC official. Herein lies the problem. With technological advancements, metro systems designs are finalised for manufacturing. But when the sizes are different, the new technology has to be completely redesigned. "If we adopt broad gauge today and later want to go in for a newer technology, we will have to repeat the entire sequence of redesigning, modifications and re-testing for safety clearances. This is because manufacturers will have their patterns, dyes and systems only according to standard gauge specifications," says O P Jain. This will increase upgradation costs.

The Kolkata metro is a case in point. "Kolkata's metro, which runs on broad gauge, is facing a number of problems. The project stands isolated as far as technology is concerned and has not been able to upgrade," says Jain. Rolling stock is old and lags behind most advanced metro systems in the world. Kolkata metro is now hardly 16 km.


The railway ministry says that since broad gauge has been adopted as uni-gauge in India, the metros should also come up on this gauge. "There is no reason why the metros should not run on it," says S K Jain, executive director (Delhi metro), railway board, railways ministry. But many experts say that since metros are "stand-alone" systems, they can run on a gauge different from the existing system. "A metro as an independent "stand-alone" network is free to chose its optimal gauge unless it is intended to be connected to an existing network," says an expert of International Union of Railways, Paris, France.

This will involve a lot of redesigning including bogies, wheels, traction motors (which run the train), shell or the body of the coaches and pentograph (which collects current from overhead wires). "Even small things such as door closing devices will have to be redesigned to suit broad gauge. Mismatch can often lead to a number of problems," adds Jain. It will also delay the project and escalate costs.

Indian Railways has, in fact, experienced such problems in the past. It bought 24 state of the art lightweight coaches under a technology transfer pact, worth over Rs 1 billion from Alstom LHB, a German firm, this year. But the new generation coaches reported many glitches. Due to break in coupling, the coaches were unhooked from moving trains on three occasions. The coaches were grounded and the firm was asked for replacements. It is possible that these problems are linked to standard gauge technology being adapted to broad gauge specifications as Alstom caters mostly to the standard gauge equipment market in Europe.

Some railway ministry officials say that they will easily achieve indigenisation and start manufacturing if they import technology for broad gauge. "But they do not realise that since majority of world metros run on standard gauge, there will be no buyers. But indigenisation of standard gauge can definitely open a huge market," says another official at DMRC.

For the Delhi metro project, out of a total of 240 coaches, 100 will be completely manufactured in India. Standard gauge manufacturing can be indigenised by the Indian Industry and then components can be exported. "As compared to other countries, component manufacturing is cheaper in India. So a lot of sourcing can be done from India by the firms from world over," says Arvind Gemini, director, Kalindi Rail Nirman (Engineers) Limited, New Delhi.


Delhi metro will play a pivotal role for entry of metro systems into the country.Cities like Kochi, Hyderabad, Bangalore and Ahemdabad are also planning to go for metro systems and are closely watching Delhi to move towards advanced standard gauge technologies. And they seem to be learning from the Delhi experience. "They know that they should not register their metro corporations under the Railways Act, as this will leave the scope for interference from the railways ministry. Rather, they should register under the Tramways Act and take autonomous decisions," says the DMRC official. Take the case of Bangalore or Hyderabad. They wanted to go in for a standard gauge metro system, but the ministry of railways insisted on a broad gauge system. The project never took off.

"While other countries are fast moving towards newer technologies, we are struck with our bureaucratic system," rues O P Jain. And going by the bureaucracy's reputation, it seems highly unlikely that technological considerations will be given the green signal.