An Army Captain-turned-farmer traces the silk route to success 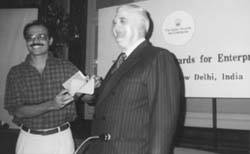 a combination of high-yielding seed varieties, fertilisers and state-of-art production practices has resulted in an increases in agricultural productivity in India over the last few decades. However, there is growing realisation that over-dependence on chemicals to boost food output has an alarming, and wholly unwelcome, effect: deterioration of soil health. Excessive use of fertilisers and pesticides has also led to an increase in pollution level. Not surprisingly, there is a renewed interest the world over on recycling organic materials to ensure sustainability in crop production. Among the handful of successful organic farmers in the country is Captain G R Gopinath of Karnataka whose techniques gained international recognition when he was awarded the Rolex Award for Enterprise (Associate Laureate) for 1996.

Gopinath, who retired from the Army to take up farming in Javagal has developed natural farming techniques for mulberry production and silkworm with an eye to the environment, output and cost. India is the world's second largest silk producer, after China, and the three southern states -- Karnataka, Andhra Pradesh and Tamil Nadu -- account for 90 per cent of silk produced in the country.

After retiring from the Army voluntarily in 1979, Gopinath returned to his native village of Gorur, about 15 km from Hassan, on the banks of the river Hemavathy. The family situation was rather bleak. Following the construction of a dam across the Hemavathy, Gopinath's family land was submerged. The family was compensated with some 30 acres of land in a village 5 km from Javagal. When the family were contemplating selling it off, it occurred to Gopinath that it wouldn't be a bad idea to try his hand at farming. He persuaded his family to let him have possession of the tract, agreeing to pay more than market price for the land after 3-4 years.

The new "promised" land was a stretch of undulating brush skirted by a stream. There was no electricity, not even an approach road. For the first two years, Gopinath lived in a canvas tent, then moved to a mud hut which served as his home for the next 10 years. After 15 years of living close to nature, he realised the truth of the maxim: what is ecologically unsound is economically unsound. "I am convinced that in farming, methods which are not environmentally benign and integrated will not be economical and sustainable," he says.

Unlike traditional farmers, Gopinath does not plough the fields. He covers it with a thick carpeting of mulch of mulberry twigs that remain after the silk worms have fed off the leaves. This obviates the need for using fertilisers for cocoon production and also helps retention of moisture. He is particularly critical of monoculture -- growing of any one particular plant variety over a large tract. Each plant extracts particular kinds of nutrient from the soil, he says. Some minerals, for instance, are absorbed by plants in minuscule quantities, but it is these traces that ensure the well being of a plant. This aspect of plant-soil relationship is lost wherever monoculture is practised.

Gopinath has not lost a single crop so far. He ensures that the mulberry leaves are nutritionally rich. The rearing house for silkworms is protected against infection. No two crops overlap which means spread of any infection from one batch to the other is eliminated. To keep out rats, he has installed an electrified fence. Mosquito nets guard access to the rearing house which is designed to maintain humidity and temperature at desirable levels. Water channels prevent ants from invading the premises.

But Gopinath's most ecologically innovative idea was to find a substitute for the bamboo trays used as cocoon mountages where the silkworms spin cocoons. He uses paddy straw instead which, he says, reduces cost. On an average, one acre of mulberry garden needs 15 bamboo mountages, therefore 3.5 lakh hectares would require a staggering 11 million bamboo mountages. And, paddy straw can be recycled. Finally, unlike bamboo mountages, straw is disposable after the harvest. This eliminates the risk of infection.

The former Army Captain now plans to produce a video film about his experiences as a farmer while he continues to develop new techniques, paving a silk route which other farmers may like to tread.