Contract farming is increasing in India, but laws are not in place to protect farmers 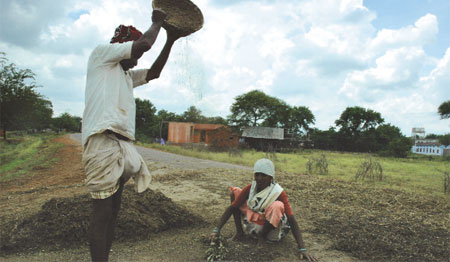 Contract farming is charting a rapid growth trajectory in India. Within a decade, it has grown by about 15 per cent. Almost 4,000 hectares are annually added to the area under this farming arrangement. While industry is aggressively making forays into this field, farmer leaders fear exploitation.

Under contract farming, companies strike a deal with the farmer to grow crops at pre-determined prices or as per the current market index.

These companies, be it food processing firms, hotels or exporters, used to earlier grow sugarcane, cotton, tea, coffee and potato. With changing demands, organic vegetables, grapes and millets like barley and oats are also being grown.

Better profit margin and steady supply of crops as the raw material for food processing and textile industries are the reasons for new players to enter the sector. Companies like Field Fresh, Mahindra and Global AgriSystem are among the new entrants.

Contract farming will get a big boost when foreign direct investment (FDI) in retail becomes a reality, say industry watchers. “Volatility in market prices of crops is a big reason for the processing industry to enter into such arrangements,” says Gokul Patnaik of national taskforce on agriculture marketing in the Confederation of Indian Industry (CII). He owns Global AgriSystem, which started contract farming in 2005.

“While contract farming ensures quality, kept in check by the firm itself, it also provides agricultural products at prices cheaper than the retailer,” he says.

The farming arrangement helps bring down inflation, says CII. “Prices of fruits, vegetables and cereals are high because they exchange five to six hands,” explains a CII member requesting anonymity. Contract farming reduces this chain. “This is why supermarkets can sell farm products cheaper,” he says.

For farmers too, it works as a lucrative proposition. Many small and marginal farmers have now entered this sector. But companies find it cumbersome to engage too many farmers to produce one crop. At an average, a farmer holds less than 1.6 hectares.

“The government does not allow aggregation of farm land into one block,” says Patnaik.

Exploitation is what the farmer fears most. In India, contract farming is legal in 18 states and union territories. Leasing out land for farming is legal in Punjab and Rajasthan. “Farmers in Punjab get about Rs 50,000 per hectare when they lease their land. This is just Rs 20,000 in Uttar Pradesh, where leasing land is illegal,” says the CII member.

A farmer is also at the receiving end when food prices drop. During these times, companies reject crops branding them poor in quality, says G V Ramanjaneyulu, executive director of Centre for Sustainable Agriculture. There have been instances when farmers have grown exotic plants that give a company monopolistic control over the market. At these times farmers have received much less than deserved.

“With FDI in retail, exploitation is sure to increase,” says Ajay Jakhar, president of Bharat Krishak Samaj, a farmer organisation in India. “The government should make it mandatory for the FDI companies that enter the Indian market to buy 75 per cent of the total retail of agriculture produce directly from farmers,” he says. Moreover, 50 per cent agriculture produce should be purchased directly from the farmer from within 100 km of each store, he adds.

Suggesting amendments in the law, P S Pangli, president of Punjab Agricultural University Farmers’ Club, has written to the state government, but to no avail. “State governments have failed to formulate strict laws for contract farming to protect farmers,” he says.

With stringent laws, both the industry and the farmer will stand to gain, says the CII. In September, it made a representation to the agriculture minister asking the Centre to formulate a model land leasing act to facilitate contract farming. In its approach paper for the 12th Five Year Plan, the Planning Commission too laid stress on contract farming, saying it is one of the ways to connect the farmer to the market.