The ways of optical camouflage 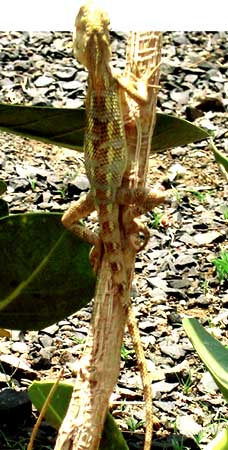 Do you know what is common between a recently taken patent in the field of nanotechnology and a publication on animal behaviour in the journal Science, a little while ago? A report in January 2006 from the Interfax News Agency, Russia, which some greeted with enthusiasm and others dismissed with scorn, noted that Oleg Gadomsky from the Department of Quantum and Optical Electronics of the Ulyanovsk State University in Russia has patented a method of making things invisible by optical camouflage. Gadomsky had been long experimenting on nanoparticles of gold. He now claims to have invented a sub-micron stratum of microscopic, colloidal gold particles that makes an object placed behind it invisible to an observer. The scientist believes that though only static objects can be made invisible for the time being, but soon it will be possible to create a cap of darkness and a magic cloak like Harry Potter's.

Equally amazing is a report in the March 2005 issue of Science. Written by researchers of the University of California, usa, the report talks about an octopus that looks like a sea monster scooting along the sea floor on two legs in the tropical waters of Indonesia and Australia. There is also a film by us film film maker Bob Cranston that shows an Indonesian coconut octopus tiptoeing backwards along the ocean bottom on its two legs, six of its arms wrapped tightly around its body. Normally, an octopus crawls over the ocean floor, pushing on its eight arms, or jets backwards through the water. The octopus's bipedal movement is a neat trick to avoid predators. The creature moves away along a path, and this makes it seem stationary to its predators.

Only time will show if humankind spurred on by experiments such as those of Gadomsky will be able to acquire powers of invisibility. But many animals seem to have mastered the power since yore. Camouflage (technically, cryptic colouration) -- blending with the environment -- is a major survival strategy deployed by both the predator and prey. A different survival strategy is used by many other animals which lace their bodies with toxins and advertise this in a rainbow of easy-to-remember warning colours. If a predator has had the misfortune of tasting one of these toxic-coated animals, it will never try out another of its ilk. Brilliantly coloured pufferfishes in coral reefs, fluorescent poison dart frogs in the Amazon forests are adept at these stratgies.

You do not necessarily have to visit some remote place to watch these strategies in action. If you are a bit patient, you can see a live show during your morning strolls or evening walks. And for those losing patience easily, there are several plants offering these strategies as a 'package deal'. One such plant is aak, Calotropis procera, a common wasteland shrub occurring almost throughout India. Its purplish-white blossoms produce copious amount of nectar and thus attract countless pollinators, nectar thieves, and other animal life. If you venture out on a spring afternoon and keep your eyes open, you won't miss the colourful life on aak. And it's almost certain that you will come face-to-face with a butterfly fluttering over the aak flowers. But don't go for its resplendence. Many a wise bird would vouch that under those iridescent colours is a store of deadly cardiac poisons, which the butterfly acquires at its larval stage while feeding on aak. This is equally true for the grasshopper, which perches on the aak leaf and advertises its toxins by the display of warning colours. Any foolish predator that ignores this warning and devours this beauty may do so at its own peril. The tiny, orange-coloured oleander aphids and the lygaeid bug on the aak flower, are equally dangerous to any potential predators not well equipped to detoxify their body poisons.


These stories could, however, be biased and one-sided. This is because human beings are completely insensitive to many signals that animals can perceive so well. For example, humans are blind to light. Hence, it may be baffling to watch a hawk suddenly getting air-borne from a treetop and diving with a ferocious speed to grab a field mouse well hidden in the grass below. While it may have actually spotted the mouse, it's equally likely that it might have tracked the victim following its urine trail which strongly reflects ultraviolet (uv) light to which tetra-chromatic eyes of birds are quite sensitive. Indeed, in addition to birds, many insects, fish, reptiles, and some rodents can also see uv light. Therefore, the butterfly caterpillar, which looks so brilliantly coloured to the human eye, might possibly appear a dull, obscure object to the uv ight-sensitive eyes of a lizard. In contrast, the weevil, which is almost invisible to us, might be probably as much conspicuous to a predatory bird as a neon signboard is to us against the dark city line.

In order to understand the cognitive accomplishments of an insect, lizard or chimpanzee, we need to evaluate how they perceive their world. Indeed, our anthropomorphic view might seem as untrue to other animals as their view would appear to us. Perhaps the following slightly modified version of a story by J A Rivas and G M Burghardt of the University of Tennessee, us, might clarify the point a little bit: "In a jungle, a pit viper and a man confront each other suddenly. The shock and fear cause in the man an outburst of adrenaline, a natural physiological response to stress in humans. The hormone reduces the flow of blood to the man's arms and legs, which as a result becomes cooler and therefore dull to the infrared sensing 'eyes' of the pit viper. The viper concludes that the biped is trying to escape by matching the cooler background -- it's using camouflage".

Ridiculous. Isn't it? But don't we also err similarly while interpreting animal behaviour? Anthropomorphism by omission -- failure to consider that other animals have a different world than ours -- is a natural tendency of humans. By abandoning this trait, we can perhaps overcome part of our natural bias and develop a more balanced view of nature.