Nagpur orange’s survival hinges precariously on its return to sustainable cultivation. Farmers have woken up to this, but will the government? 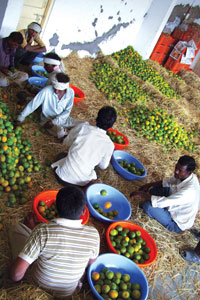 A beaming Uday Wath hugs the trunk of his sturdy, disease-free Nagpur orange tree. All around him are trees drooping with the fruit, large and healthy. The tree trunks are singularly free of both telltale gummosis wounds and bluish white bordeaux paste, the chemical meant to prevent them.

Not more than four years ago, these trees were on the verge of death. The cause: gummosis, a lingering disease caused by one or more species of the fungus, Phytophthora. As gum oozes out of the trunk, the tree weakens and eventually dies. “There was a time when I was actually thinking of felling the orchard,” he says. That’s when Wath turned organic.

“As a last ditch effort I gave up chemicals,” he says. He regularly started spraying jeevamrut on the trees. This is the fermented extract of cow dung, cow urine and neem leaves, known for its anti-fungal properties and high nitrogen content. He applied its solid residue to the wounds. He also began mulching the weeds.

It took not more than a year for the trees to recover. The yield has now grown to 2,000 fruits per tree per season. “There is no trace of Phytophthora in my orchard, though all the orchards in my village are infected,” he says proudly. Wath is one of a small group of organic orange cultivators in Vidarbha. Organic cultivation has helped them cut cost, improve yield and find practical and cost-effective solutions to the intractable problem this world-famous crop is riddled with.

In the early 1960s, chemical fertilisers started replacing farmyard manure and peanut cake (peanut oil pressing residue) in a rush to enhance production. Distance between trees was reduced from 20 metres to 10 metres. Sweet lemon was replaced by jamberi (rough lemon) as preferred rootstock to bring down the bearing age of trees from 9-10 years to 5-6 years (see ‘Nursery scam’). The consequent drop in the tree’s lifespan, from 65-70 years to 30-35 years, took decades to come to light.

The great orange rush began in earnest in the 1970s as markets opened in Howrah, Delhi and Kanpur. Traditional cash crops like turmeric and chilli were forgotten as farmers scrambled for orange. Cash began to flow and rags to riches stories spread. Orchards multiplied in several districts of Vidarbha.

But a silent devastation was occurring simultaneously. “Borewells followed orchards everywhere,” says Karuna Futane, organic farmer and writer, among the first ones to draw attention to the environmental damage caused by oranges. Shendurjana Ghat, one of the best orange producing areas in Warud, already had at least 19 borewells per square kilometre. By the 1980s, groundwater levels in Warud and Morshi had dropped from three metres below ground to 120 metres. Mango, neem and babool trees were felled fast for making orange packaging cases, denuding Warud’s green hills in a decade.

The crop has been buffeted by crisis after crisis for decades now. Acute water crunch, pest attacks, wasting diseases, rising temperatures and repeated bouts of large-scale tree deaths have brought it to a point of vulnerability where just a couple of bad years could wipe it out altogether, says Suresh Ambulgekar, joint director of agriculture, Amravati division.

The intense heat of the 2010 summer came as yet another big blow. Temperature remained above 46° C for more than a month and above 48° C for seven days at a stretch. This wiped out 25 per cent of the trees in the region.

In Nagpur and Wardha districts, where oranges are grown on 30,000 ha, 1.76 million trees died due to heat. In Amravati division, which has a 75,000 ha cultivation area, 2.9 million trees died. In an all-time low, only 20 per cent of the region’s orchards yielded.

Good monsoon in 2011 came as a brief respite. But a failed crop in February and attack of a new pest, Citrus psylla, underlined the continued danger. In face of this multi-layered crisis, agriculture department has no recommendation but more irrigation and more pesticides. This is not the real solution, admits Ambulgekar.

Phytophthora: no solution in sight

Excessive chemical use, waterlogging and extensive monoculture are the prime reasons for repeated pest attacks and diseases in oranges, says Mantri. Chemical fertilisers cause trees to start bearing fruits too early. This weakens their immune systems, he says.

Mantri has been growing organic oranges for four decades. 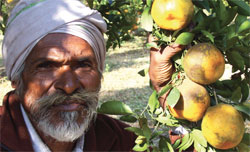 As of now, Phytophthora has permeated the soil in the region. Hundred per cent orchards are infected, says Hargovind Rathi, Amravati division technical officer, responsible for horticulture crops. To prevent the infection, NRCC, just like the agriculture department, recommends more chemicals—Bordeaux paste and fungicides like Redomil and Elite. “If this treatment is given on time, Phytophthora can be controlled,” says Shivankar.

Treatment with fungicides costs Rs 120 per tree per application and Rs 33,240 per ha. Farmers prefer felling orchards to the expensive and endless rounds of treatment, he says.

Organic cultivation requires Rs 15-20 per tree per season. Organically cultivated trees yield fruit late, at seven-eight years. But they are healthier and more disease-resistant, says Ghanshyam Chopde, zero-budget farming guru in Mandwa village, Wardha district. The tree lives longer and yields better, he adds. Manoj Jawanjal has done organic cultivation in his orchard of 1,800 trees for the past 10 years in Katol town. “The intensity of Phytophthora in my farm is 70 per cent less than elsewhere,” he says.

But neither the agriculture department nor NRCC take cognisance of this. “Chemicals do not produce diseases, pathogens do,” says Shivankar. “We have experimented with both organic and chemical cultivation in the NRCC farms, and are yet to see any significant difference,” he says.

Farmers contend that NRCC scientists should conduct study in actual farm conditions instead of experimental plots. Also, in the initial days of conversion to organic cultivation, it is essential that frequent spraying of jeevamrut and application of farmyard manure is coupled with heavy mulching and balanced water supply, says Dilip Kalmegh of Jamgaon village in Nagpur. “NRCC’s cut-and-dried organic measures do not yield results,” he says.

Despite the water crisis, misuse of water is rampant. Excessive irrigation and resultant water-logging has exacerbated Phytophthora. Hard and brackish water from borwells has caused soil salinity. 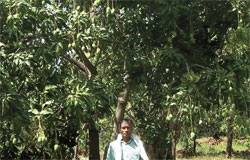 The government’s only response to water crisis till date has been a 50 per cent subsidy on drip irrigation. This does not work as the government recommendation of six drip points per tree is still excessive. Wath, who reduced the supply to two points per tree to suit the soil in his farm, says most farmers remove the drips when waterlogging persists. Drip irrigation failed miserably in the summer of 2010 because many areas did not have enough water even to run the drips.

Water is the biggest question mark on the sustainability of orange crop. Yet, there is no clear understanding on how much water an orange tree needs. NRCC recommends a high 150-180 litres per day per tree and more for fruit-bearing trees. Organic farmers say 20-35 per cent of that is enough if mulching is combined with contour bunding and judicious water supply.

In the summer of 2010, Chopde saved his orchard by covering the ground with a thick layer of mulch when his well dried up completely.

Government agencies do not wish to recognise monoculture as a problem. Orange gives quick cash and every farmer wants it, says Shivankar. Therefore, monoculture is bound to happen, he says. As much as authorities hate to admit, farmers are rejecting orange to grow vegetables or conventional cash crops like cotton and soy bean. With less water, there is no option, says Rajesh Jivtode, orange cultivator from Kalmeshwar taluk. “I lost 2,200 of my 4,000 trees in three years. I may fell another 800 so that I can properly manage the remaining 1,000,” he says.

In recent years, orchards of mango, jamun, ber, amla, custard apple, guava and karwand have come up in the region (see ‘Sweeter options’). And the number is growing. The verdict is clear: farmers want alternatives to orange that are rainfed and require less inputs.

Ram Gopal Malvia, farmer in Wardha’s Dhadi village contests this. “In the 14 years of chemical cultivation, my 400-tree orchard did not yield a single crop. But in the very first organic year I earned Rs 1.5 lakh,” he claims. Manoj Jawanjal says his trees yield an optimum 3,000 fruits per season.

Chemical farming gives an illusion of better yield because it causes exaggerated flowering, says Wath. But shedding of flowers and young fruit is high. “In organic cultivation, flowering is realistic and shedding low,” he says. Farmers agree that crunch in availability of organic material—farmyard manure and oil cake—is making transition to organic difficult. “Research institutes should work to remedy this situation, not use it as an excuse,” says Mantri.

While it is true that Nagpuri santra is part of the region’s identity and cannot be wished away, there is no contesting that the crop has inflicted considerable ecological damage and is in a serious crisis itself.

“Till date, orange has survived by tearing down everything else in its environment,” says Futane. But the limit has been reached. Now, the orange must learn to survive in harmony with everything else. Its survival will depend heavily on how well it can effect a return to sustainability. Remedies may involve harsh steps like reduction of acreage of orange and introduction of mixed orchards to restore environmental balance. Farmers are waking up to the reality, but will the government machinery wake up and smell the coffee?