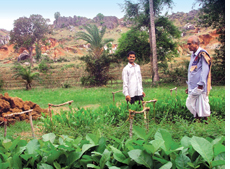 A hill in Orissa's Ganjam district used to be barren about 20 years ago. In 1985, the state forest department planted saplings, including Acacia and Eucalyptus, as part of its state-wide social forestry programme. Villagers of Sasan Ambagaon took it upon themselves to take care of the saplings and are now reaping benefits of a 'forest' there. The forest is spread over 32 hectares in the village. Under the banner 'Radhakrushna Pathgar', the villagers planted more samplings on what was once called the 'barren hill'. "We decided to nourish the growing plants and not cut them for money," says Bipra Charan Sahu, president of pathagar. Sahu says that "summers is now accompanied by cool breeze instead of the intense heat generated from the rocky hill". "The forest has survived amidst human habitation and the credit should go to the villagers," he says. Pathgar also issued forest produce distribution cards to every household in the village comprising 842 families.The cards enable villagers to get forest produce at a price much less than prevailing market rates. For example, 250 kg of firewood is given at Rs 50, while the market rates are over Rs 500. Tirupati Balaji Patra, vice-president of Pathagar, says they charge Rs 5 to initiate members to be a part of the conservation programme. Then they are given the card through which they get bundles of leaves and dry twigs for free. Pathgar has earned Rs 1.75 lakh through sale of forest produce, says Pitabas Biswal, Pathgar secretary. "Illegal felling of trees is history," he says adding they have asked the state government for a rainwater harvesting project at the foothills of the forest. Even the forest officials acknowledge the villagers' efforts. "The people are very enthusiastic," says S N Mohapatra, divisional forest officer, Berhampur. The forest department is now contemplating to develop the area into a natural forest by adding other varieties of trees and encouraging villagers to plant cashew, bamboo and other medicinal plants. There is also a plan for increasing the area by another 10 ha, including a water harvesting structure, says Mohapatra.