Has the state over-committed itself? Why has delivery become so fraught? 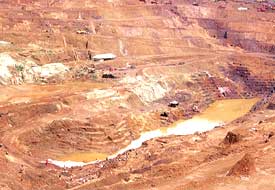 zashipur perfectly demonstrates possible overdrive in the state government's passion to liberalise mining, or industrialise all over again.

And how. In Orissa, projects worth Rs 2,50,000 crore are likely to be implemented in the next five to ten years, a majority of them mining projects. In the last two years, Naveen Patnaik's government has also signed memoranda of understanding with 25 steel industries; if all of them go through, the state will produce a whopping 24.91 million tonnes of steel each year During 1995-1996, Orissa received the largest amount of private investments in India, both foreign and domestic, and now ranks among the top ten states in terms of investment.

To attract this investment, the state has been the perfect facilitator for entreprenuers. It acquires land around mining sites, however truculent the population may feel. It manages permission for companies from the Union government. The lease procedure has also been simplified for quick processing. In fact, it has committed 18 rivers and reservoirs for exclusive use by industry for its water-intensive activities!


Consider the scale of water use: In 2002-2003, Orissa produced over 52.21 million tonnes of coal, using up 10 million cubic metres of water, 50 times the total urban water supply in the state. How much will the new projects guzzle? The proposed production of steel, for instance, will require 1.2 million cubic metres of water every year, or 3,287.7 million litres per day. More than five times the total water supply to the state's 104 urban bodies, which is also mostly sourced from Orissa's 11 rivers.

Steel industries are now coming up in the river basins of the Mahanadi, Brahmani and Baitarani. According to a report by the state water resource department, by 2051, the Brahmani river system will have to import 2,288.47 million cubic metres from the Mahanadi to meet water demands. The Mahanadi's water needs for industrial use will double by that date. So it's doubtful Orissa will be able to meet water needs as committed to the steel sector.


A consistent reason the state government produces in favour of its industrialisation overdrive is it will provide employment. State rhetoric, however, is belied by hard facts. The Orissa Economic Survey , 2002 shows that the employment potential of the mining sector has actually reduced. In Dhenkanal, Jajpur and Keonjhar districts, chromite mines employed 8,886 people in 1995-96 but only 6,679 in 1999-2000. This is also the case in the coal mines of Angul, Jharsuguda and Sundergarh districts.

At present, 20 lakh people in the state are unemployed while another 20 lakh are underemployed. Will mining and industries change things? The entire investment in Orissa will create an employment potential of only 1,75,000. Consider the proposed refinery at Kashipur. It has an employment potential of only 1,000; that too for only 20 years. Yet it will affect the lives of nearly 20,000 people in 82 villages.

Indeed, mines and plants are symptomatic of outsider incursions. Baha Kisko, a community leader of Pachwara, says, "They will never create jobs for the tribal people. Compensation money will finish in two years." Also, as Samarendra Das, an Orissa-based activist and author of a study on the political economy of mines, puts it, "A Rs one crore investment in mines results in only 7 employment opportunities. The same investment in big and medium industries creates 40.In contrast, this investment in small and cottage industry would generate 4,475 jobs."

Manas Jena, convenor of the Orissa Mines Area People Action Network, worries that mines will create huge imbalances. He says, "Our study has found hundreds of families displaced from forests are landing up in urban slums." The percentage of Scheduled Tribes (st) in Orissa living around forests has gone from 95.39 per cent in 1981 to 80 per cent in 1990. Correspondingly, urban st s increased in percentage due to deforestation that came with the establishment of various plants.


The state's focus is on captive use and mineral processing. Specifically, the policy stipulates a) that an application for allotment of mining lease will be considered after the applicant invests substantially in a value addition project within the state; and b) that the lease will be allotted only after the promoter has committed 50 per cent of the proposed investment.

But consider the arrangement in the joint venture that the Orissa Mining Corporation Ltd (omc) signed on with Vedanta Alumina Ltd, on October 5, 2004, to install an alumina refinery plant that would produce 1 million tonnes of the metal per year. The bauxite would be sourced from mines located in the Niyamgiri hills in Lanjigarh block, Kalahandi district. omc's stake in the joint venture is a mere 26 per cent, its share of profits restricted to mining bauxite. Vedanta will oversee the day-to-day operations of the joint venture, which is the raising contractor for the mines. In case of a rise in mining costs, omc will reimburse the joint venture. It will also pay all taxes, including sales tax and statutory duties payable in relation to the mining operation. In short, while Vedanta will run the venture, omc will shoulder all revenue obligations.

What exactly is the government getting from its projects? Take bauxite. The state-based partners in joint ventures will receive a meagre royalty of Rs 60 per tonne of bauxite mined. The alumina produced at the Kashipur refinery after it starts up -- it is a 100 per cent export-oriented venture --is to be sold at us$85 per tonne. The reserves here are estimated to last 22-23 years. By that time, uail would have earned Rs 2,88,000 crore. And the government? Rs 1,300-Rs 1,400 crore.

But state minister for steel and mines Padmanabh Behera isn't worried about being undercut. Indeed, replying to questions in the Orissa state assembly on November 2, 2004 -- the questions were related to the Lanjigarh joint venture -- the minister said the bauxite mined here would earn the state Rs 100 per tonne. At this time, bauxite from Gujarat, of lower grade, was being sold at Rs 700-Rs 800 per tonne.

In its latest report, the Comptroller and Auditor-General of India (cag) has sharply pulled up an iron-ore based joint venture. In 1995, state-owned omc entered into a joint venture with uk -based multinational mining giant Rio Tinto to set up an integrated iron ore project of 15 million tonne per annum at an estimated cost of us$800 million- us$900 million. A joint venture company was incorporated on September 18, 1995 as Rio Tinto Orissa Mining Pvt Ltd. The project was aimed at meeting iron ore requirements of new steel plants to be set up in the state and to export surplus quantities. The project involved mining lease of Gandhamardan and Malangtuli iron ore mines, a dedicated rail line to Paradip Port and the port's development.

omc duly chipped in with its equity contribution, Rs 4.26 crore in two phases. But the Malangtuli lease never saw the light of day; nor did the rail line or a better port. The report says omc's investment was not approved by the company board. It was, simply, a "futile investment".


But all the flaws, deliberate or otherwise, pale before the following questions: what of tribal interests? How are these projects to be implemented in tribal areas, in forests and lands constitutionally protected from exploitation by non-tribal entities? The government's answer is univocal: twist the law of the land, beyond recognition.

This is exactly what it did at Lanjigarh, inhabited primarily by the Kondhs, a scheduled tribe. The joint venture was formally signed on October 2004, violating the original memorandum of understanding omc had signed with Sterlite Industries India Ltd, which was to set up both a refinery and operate a mine. Now, it looked as if two different companies were partners for the two different operations. In truth, Vedanta was an offshoot of Sterlite.

A year before the formal joint venture was signed, the chief minister had already laid the foundation for the refinery project. By that time, a reign of terror similar to that in Kashipur had descended upon villages such as Basantpada. Miraculously, the company had acquired land and begun on-site work.

As a subsequent on-site investigation by the Central Empowered Committee (cec) found out, the land was forcibly taken away from tribals in Bandagudha and Rengopali villages. Similarly, tribals cultivating land in Jaganathpur were summarily evicted, and the land transferred to Vedanta. Such actions flew in the face of state-level laws to protect tribals, such as the Orissa Scheduled Areas Transfer of Immovable Property (by Scheduled Tribe Regulation) Act, 1956 -- it forbids transfer of land to non-tribals.The atrocities committed clearly contravened Scheduled Caste and Scheduled Tribes (p revention of Atrocities) Act, 1989. And in providing land to a private company, the state had also violated s chedule v of the Constitution.

• Work on the refinery began without seeking clearance for 58.93 hectares of forest land that fell within the project site. This violated Union ministry of environment and forests (moef) guidelines on seeking Central clearance for such projects

• The land acquisition notice issued by the district collector on June 6, 2002, clearly stated that 47.7 hectares of forest land had been included in the project site, a gross contravention of the Forest Conservation Act, 1980 (fca)

• The rehabilitation package violated Schedule v of the constitution, for it had rendered tribals landless

• The Niyamgiri hill, which was to be mined for bauxite, was a biodiversity-rich area, and the state government had already planned to make it a part of a new elephant reserve

• Bauxite was also to be mined from nearby Karlaput, near an existing sanctuary

But, if the chief minister is to be believed, "no one, but no one" can come in the way of Orissa's dream to develop. This state is ready for war against its people.