'Ours is a model of natural farming'

A couple in Kerala demonstrate that barren land can be brought back to life without using any external inputs.

'Ours is a model of natural farming' 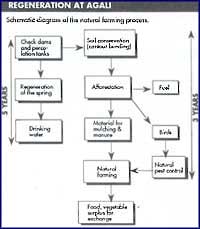 A BARREN hillock in Agali village in Kerala's Palakkad district is now verdant with forests worth lakhs of rupees, as a result of natural farming -- farming without any external inputs -- by two school-teachers, Vijayalakshmi and Balakrishnan.

They have made 8 ha of degraded land cultivable through mulching, water conservation and silviculture, without any ploughing, fertilisers or pesticides. In 1983, when the couple bought the land in the Attappady region of Mannarghat taluka, "not even a blade of grass could be seen in the highly eroded topsoil", recalls Vijayalakshmi.

The first step was soil and water conservation: contour bunding, excavating four percolation ponds and constructing 20 check dams. Initially, drinking water had to be fetched from the foot of the hill, but now plenty of water is available as the check dams and percolation ponds recharged the dry spring on the hill in five years. The next step was afforestation. Bamboo, silver oak and rosewood were planted on 7.25 ha and watered by burying earthen pots of water around the saplings. By 1986, the trees were big enough to check soil erosion considerably.

Says Balakrishnan, "We wanted to conserve water and obtain green manure and loppings for mulching, before we planted vegetables, cowpea and paddy."

"Soil erosion has been checked and we cultivate vegetables such as carrots, chillies and spinach and tubers such as tapioca and turmeric. We get one kg turmeric from a single plant," says Balakrishnan. Tapioca shoots are just put under the mulch. Sunflower, paddy, samai and cowpea seeds are broadcast on the mulch and intercropped. Cultivation of bananas not only yields fruits, but leaves as well for mulching and manure. Many of the crops are not sown again, but allowed to regenerate naturally.

"We are not doing organic farming. Ours is a typical model of natural farming. Our fertilisers come from the trees and the excreta of earthworms. Instead of burning weeds, like most farmers in this area, we use them as mulch. This is not only good manure, but also a good breeding ground for earthworms," emphasises Vijayalakshmi. The forest is a veritable bird sanctuary and the many birds keep pests and vermin under control, thereby eliminating the need for chemical pesticides, the couple explains.

"Our main objective is to be self-sufficient in fuel, food and vegetables," says Vijayalakshmi. Now the couple not only grow sufficient food for themselves and their children, but have enough left to exchange with their neighbours for consumables such as coconuts, which they don't grow on their farm. Motivated by their success, they now plan to take up regeneration of other areas and training of the villagers in natural farming.