After visiting hospitals and slums VIBHA VARSHNEY has found that asthma makes poor children suffer far more than their rich counterparts. And a complete lack of policy, or official action, compounds their affliction 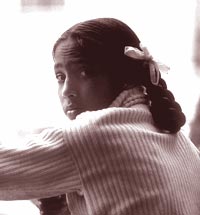 The shanties in Yamuna Pushta are packed tight. A dusty and torn curtain hangs over the entrance to Sabina's house. Trunks and cupboards leave little space for Sabina and her family. A kabadiwala has spread his polythene bags and plastic ware at their doorstep. A neighbour's goats roam nearby.

"This place is very cold because of Yamuna; I shiver even in my warm clothes. Sunlight does not reach our house," she says. Her jobs at home are to wash clothes, clean utensils and fetch water from the community tap.

Sabina's father is a rickshaw-puller and her brother a kabadiwala. Sabina, who has been asthmatic since childhood, takes medicines given by a non-governmental organisation (NGO) near her home. An inhaler is an extravagance, she says. "We cannot afford it. It will cost what my father and brother earn in an entire day.'' She once persuaded her father to buy her an inhaler but some children stole it. "What a big waste," says Sabina.

She used to visit Kasturba Gandhi Hospital near Delhi's Jama Masjid for treatment. Doctors gave her tablets and syrups and told her to take steam at the hospital if there was an emergency.

No national data on asthma in India is available but the World Health Organization (WHO) estimates that 10 per cent to 15 per cent of 5- to 11-year-old children suffer from the disease in the country. A study done by the paediatrics department of National University of Singapore found that asthma is the most common chronic illness in that country in childhood. The Indian government hasn't bothered -- asthma isn't a priority.

It costs an average Rs 333 every month to buy a child's medicines for asthma, says a recent study done by S K Kabra, R Lodha, M Puranik and N Kattal of the paediatrics department of All India Institute of Medical Sciences (AIIMS). This is about one third of the monthly per capita income of the people studied.

Ten-year-old Arti needs medicines worth Rs 350 each month to prevent an asthma attack. Arti's mother Sunita, a textile factory's worker, can hardly afford them. Her salary is Rs 2,500 on which she has to raise another daughter.

Two years ago, Arti caught pneumonia and could hardly breathe. A doctor near her home gave medicines that helped her but she fell ill again the next year. "I feared Arti would die that night," says elder sister Neelu.

"At around 10 pm, Arti said she could not breathe and felt as if someone was strangling her. We had to take her to AIIMS," says Neelu. The neighbourhood doctor took Rs 350 but was of no help. That night cost Sunita Rs 1,000. She had to leave her factory in Okhla for a month and all her savings were used up. Arti risks another such night.

A narrow muddy road leads to Arti's one-room house. Around 100 m of this muddy road in front of her house is a puddle. Sunita and her daughters share the toilet with another family. Their view from the balcony is of a congested colony. Sabina and Arti can't leave Yamuna Pushta or Sangam Vihar. It's the cheapest place they can afford a home in.


Seema Ujjain is 12 and lives in Dakshin Puri, Delhi. She suffered an asthma attack two years ago and now the attacks have become more regular. The last one left her in an AIIMS hospital bed for two days and her parents in Rs 4,000 debt. "We have to work longer and harder to repay the loan and collect money for treatment," say Seema's parents. All Seema's parents know that she is "allergic to something".

A disease on the rise 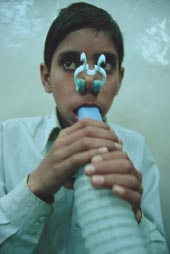 The WHO estimates that between 100 and 150 million people around the globe have asthma and the figure is increasing. Over 180,000 people die worldwide each year due to asthma. India has an estimated 15-20 million asthmatics.

Belgium's UCB Institute of Allergy estimates that asthma has doubled in Western Europe in ten years.

In the US, the number of asthmatics has increased by over 60 per cent since the 1980s and deaths have doubled to 5,000 each year. The National Heart, Lung, and Blood Institute of USA says that the prevalence of asthma around the world has doubled in the last 15 years. In the absence of a nation-wide study, data collected from certain cities can give an idea about the incidence of asthma in India.

A questionnaire-based study by Vallabhbhai Patel Chest Institute in nine randomly selected Delhi schools found asthma in 11.9 per cent of the students. The actual figure could be higher because the disease is generally undiagnosed.

A study in Chennai found that overall prevalence of breathing difficulty was 18 per cent and the prevalence of diagnosed asthma was 5 per cent.

A study in Mumbai found 3.5 per cent of the people had asthma based on a doctor's diagnosis and 17 per cent on the basis of standard definition. Coming to villages, as many as 2.6 per cent of children between 1 to 15 years of age had asthma, says a study done in five villages of Dehlon block in Ludhiana.

"Asthma is definitely increasing in both urban and rural areas. In urban areas, this increase is seen because of a rise in the number of industries, number of automobiles and their emissions, density of population and overcrowding of houses. All these lead to poor indoor air quality," says H Paramesh, a Bangalore-based lung specialist and director of Lakeside Medical Centre and Hospital.

For the first time in the country, the Indian Council of Medical Research is doing a study on the disease in Kanpur, Chandigarh, Delhi and Bangalore.

"Poor families cannot prevent asthma. The risk is even at their homes," says Asha Benakappa, associate professor of paediatrics, Bangalore Medical College. Poor children risk asthma from their parents' work place: those of construction workers breathe dust and those living near small-scale industries take in fumes.

Yamuna Pushta and Sangam Vihar are the worst places for Sabina and Arti to live but they can't escape. Sabina's father drives his rickshaw in Daryaganj, near Pushta, and Okhla, near Arti's home, is where her mother works. Asthmatic children from poor families have disproportionately high rates of hospitalisations, emergency department visits, disability and deaths, says a study by M J Federico and A H Liu of Children's Hospital, Denver, USA. "A child might become immune to pathogens but not to allergies or triggers," says Randeep Guleria, lung specialist at the department of medicine, AIIMS.


Pollution and asthma are linked, several studies done in India and around the world have shown. Delhi's polluted air is responsible for a 41 per cent increase in asthma cases and a 39 per cent rise in chronic bronchitis, says a study by J N Pande, a former professor of medicine at AIIMS. The figures were established by correlating the amount of pollutants in the air with the number of emergency room admissions on particular days. More people were admitted to emergency on days when total suspended particulate matter and carbon monoxide was high in the air. Similarly, asthma in Bangalore increased from 9 per cent in 1979 to 29.5 per cent in 1999, says Paramesh's study. During this period, the number of industries in the cities increased from 4,700 to 40,146 and the number of vehicles from 1.46 lakh to 12.23 lakh.

In Arizona, USA, asthma deaths in 1999 increased by 10 per cent on days with average pollution as compared to those on clear days. On the worst polluted day of that year, asthma deaths jumped to 40 per cent and asthma attacks increased by 36 per cent. Hospitalisation rates were more than 20 times high in New York's poor neighbourhoods as compared to wealthier areas, said a law suit filed last year against the city's and state officials. Nearly 40 per cent of children in the city's homeless shelters suffer from asthma, said the petition, filed in behalf of four asthmatic children. In response to the suit, the court asked city and state officials to improve the health care system for poor children.


Worldwide, asthma is putting a burden on countries. Direct and indirectly, the US spends more than US $6 billion on asthma. The average cost of treating asthmatic children in that country is US $3.2 billion. Britain spends about US $1.8 billion on health care for asthma and because of days lost through illness, WHO estimates. In Australia, annual direct and indirect medical costs associated with asthma reach almost US $460 million. In Malaysia, the average monthly cost for treating children is US $15.56.

The cost India is paying for asthma is not known, but we know that people are paying a lot. Asthma can't be cured but the pollution that triggers it can be. Sabina, Arti and Bharat need clean environments. Their backyards will be factories, congested colonies and dusty roads. A bit more breathing space for children like them and India would have made a start in controlling asthma.

With inputs from Ramya Vishwanath in Bangalore